Rick Scott, right, after resigning as CEO of Columbia/HCA in 1997.

Democrats had some fun with Photoshop after Florida Gov. Rick Scott released an ad promoting term limits in Congress.

The TV ad shows Scott, who is running for U.S. Senate, in front of a white board with an outline of the United States behind him. Halfway through the ad, Scott puts a red X next to Washington to illustrate his point that it's "the only place that doesn’t want term limits." 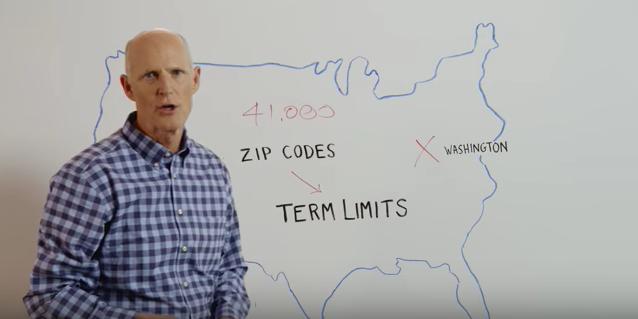 The Florida Democratic Party recycled the image of Scott on Twitter to insert a joke about his tenure as CEO the Columbia/HCA hospital chain. Federal agents went public with an investigation into the company for Medicare fraud in 1997. Scott resigned from his post shortly after, and the company wound up paying a record $1.7 billion in fines after pleading guilty to 14 corporate felonies.

"Hey @ScottforFlorida - we fixed it for you. #SelfServingScott," the Florida Democratic Party tweeted.

"X marks the spot at every HCA location where I probably defrauded taxpayers," the edited image says.

Florida Democrats told us the eight X marks weren’t intended to refer to specific cases at hospitals. "Probably" is barely squeezed in, roughly half the size of the rest of the words. Democratic Party spokeswoman Caroline Rowland said that should indicate the tweet was a joke.

But is it true? Scott certainly hasn't been immune from claims surrounding his time as CEO of Columbia/HCA. In 2014, Florida Democrats claimed Scott "oversaw the largest Medicare fraud in the nation’s history," which PolitiFact Florida rated Mostly True. We wanted to see how this new claim stacked up.

Scott started Columbia in the spring of 1987, purchasing two El Paso, Texas, hospitals. Over the next decade he added hundreds of hospitals, surgery centers and home health locations. In 1994, Scott’s Columbia chain purchased Tennessee-based HCA and its 100 hospitals and merged the companies.

In 1997, federal agents seized records from four El Paso-area hospitals and then expanded their investigation across the country. They focused on whether Columbia/HCA had committed Medicare and Medicaid fraud.

Scott resigned as CEO in July 1997, almost four months after the inquiry became public. In December 2000, the U.S. Justice Department announced that Columbia/HCA agreed to pay $840 million in criminal fines, civil damages and penalties. The government settled a second series of similar claims with Columbia/HCA in 2002 for an additional $881 million.

We’ve covered specific charges against the company in several fact-checks since Scott’s first race, such as the company billing Medicare, Medicaid, and other federal programs for tests that were not necessary or had not been ordered by physicians; attaching false diagnosis codes to patient records to increase reimbursement to the hospitals; and illegally claiming non-reimbursable marketing and advertising costs as community education.

We don’t know a lot about  the exact hospitals where fraud was found. But the scope of the settlement suggests the Democrats’ map of eight spots isn’t that much of a stretch.

By the time Scott resigned, Columbia/HCA had grown to more than 340 hospitals, 135 surgery centers and 550 home health locations in 37 states and two foreign countries, Scott's campaign said in 2010.

That includes HCA networks in  Houston, Miami, Oklahoma City, Wichita, Kansas City, Utah (either Payson or Salt Lake), Nashville and Falls Church, Va. In each of those cities, there is at least one hospital in the HCA network.

We could not find any other direct evidence that shows tax payers were specifically defrauded in all eight of the cities pointed out by the Florida Democratic Party, but the release indicates that the fraud was a national issue.

Then-Attorney General Janet Reno said in the 2000 release that the investigation was the "the largest multi-agency investigation of a health care provider ever undertaken by the U.S."

"Health care fraud impacts every American citizen. When a company defrauds our nation's health care programs, it takes money out of the pockets of the American taxpayers," Reno said in 2000. "It is wrong."

The DOJ also noted in the release that prosecutors from more than 25 states across the country assisted in the case.

Adam Levine, an adjunct professor at Stetson University College of Law, said it’s "mostly correct" to assume that there was fraud in areas where HCA is located given the amount of money involved.

"We don’t know where the offenders were and which were worse than others," he said. "So all are equally culpable."

One final point: Scott was in charge, so he bears some responsibility and has said so. But it's worth pointing out that we don't know how much he knew, and when he knew it.

"While I would agree that a CEO or corporate officer cannot know everything, the depth and breadth of the fraud indicates systemic, company-wide policies and procedures that had to be flawed," Levine said.

The Florida Democratic Party distributed a cheeky map of the country and Scott, saying "X marks the spot at every HCA location where I probably defrauded taxpayers."

The post involves the health care fraud settlement against Scott, who used to be CEO of Columbia/HCA. We don’t know if fraud occured at those eight exact places on their map, but experts said the scope of the settlement with Columbia/HCA suggests the Democrats' claim isn’t too much of a stretch. The Department of Justice and the attorney general said the case affected facilities nationwide and taxpayers across the country.