The day President Donald Trump gave his first State of the Union address, Rep. Markwayne Mullin, R-Okla., posted an image on Facebook that showed why he was "proud to have a president that’s putting America first and investing here at home."

Mullin’s post was a side-by-side comparison of Trump and President Barack Obama. 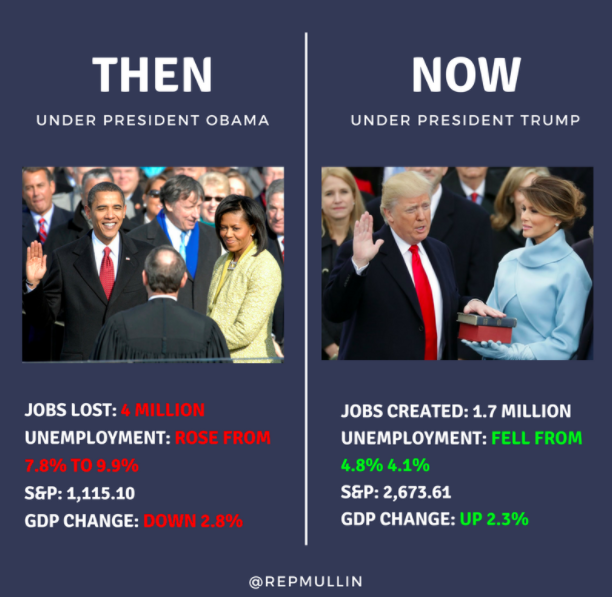 While it didn’t say so, the statistics were for the first year of each president. Against the gains under Trump, the image had these grim numbers for Obama:

The message, however, is thoroughly deceptive.

The CNN Money article Mullin's office cited points out the danger of judging any president based on his first year alone.

It quotes historian Douglas Brinkley saying, "It's not after year one or two that people judge a president. That can affect midterm elections. But what presidents are remembered for are the numbers when they leave office."

The examples in the article make that quite clear.

President Jimmy Carter’s first year had 3.1 million more jobs, falling unemployment and a GDP of 4.6 percent. But by his last year, the country was in recession. Unemployment had gone from a low of 5.6 percent to a high of 7.5 percent. Annual GDP was a negative 0.2 percent.

President Ronald Reagan’s first year had anemic job growth of 130,000 and rising unemployment that reached 8.3 percent. But when he left, the country had gained nearly 16 million jobs, unemployment was down to 5.3 percent and GDP growth was 4.2 percent.

President George H.W. Bush took over with an economic wind at his back, but a downturn hit and while the economy recovered, it wasn’t enough to win him a second term. GDP growth stood at 3.7 percent when he came in and bottomed out at negative 0.1 percent. Unemployment started at 5.4 percent and climbed to 7.4 percent in his last year.

President Bill Clinton had a moderately good first year, but closed out with impressive GDP growth of 4.7 percent, an unemployment rate of 4 percent and a net gain of  almost 23 million jobs.

President George W. Bush had a poor first year and disastrous last one, as the country slipped into the Great Recession. GDP growth in 2001 was 1 percent. When Bush left, it was a negative 0.3 percent and unemployment had gone from 4.2 percent to 7.3 percent.

When we apply the yardstick of where things stand from the beginning to the end of a president’s tenure, Obama looks quite different from the picture Mullin paints.

When Obama took office, GDP was falling at a rate of 2.8 percent. When he left, GDP was growing by 1.5 percent and it had reached 2.9 percent the year before. The country had 11.2 million more jobs. Unemployment had gone from a high of 10 percent during his first year to 4.7 percent when he left.

"As most nonpartisan economists recognize, you cannot blame a new president for the economic conditions that prevail when he or she takes the oath of office," economist Gary Burtless of Brookings told us. "Those are the responsibility of the previous administration. The highly partisan comparison (in the Facebook post) does not reflect this simple reality."

Obama inherited an economy in collapse, Burtless said, while Trump took over when economic conditions were strong.

Mullin compared improvements in the economy during Trump’s first year with negative statistics during Obama’s. The post doesn’t note it, but Obama’s numbers are for only his first year in office. While those numbers are accurate enough, they ignore that Obama took office as the country was sliding into the depths of the Great Recession. In contrast, Trump inherited an economy on the upswing.

Mullin overlooks the gain of 11 million jobs and an unemployment rate that fell by more than half under Obama.

There’s some accuracy to the stats in this statement, but they aren’t labeled clearly. We rate this claim Half True.