Richard Cordray
stated on June 4, 2018 in an event in Springfield:
On Mike DeWine's record as attorney general: "Opioid deaths have tripled on his watch and there have been cuts to funds for first responders and people in the community fighting the crisis."

As opioid deaths have risen in Ohio, the epidemic has become weaponized in political campaigns.

"Mike DeWine has been a dismal failure as Ohio’s top cop. Opioid deaths have tripled on his watch and there have been cuts to funds for first responders and people in the community fighting the crisis," Cordray said in Springfield June 4.

Cordray has previously pointed the finger saying DeWine and Republicans were "asleep at the switch" on opioids and that DeWine "did nothing about it."

Cordray’s statement is an overreach. Although Ohio is one of the hardest hit states by opioid overdoses, this is a national problem.

Opioids (including prescription opioids, heroin, and fentanyl) killed more than 42,000 people in 2016, more than any year on record. About 40 percent of all opioid overdose deaths involve a prescription opioid. In October, President Donald Trump declared a national emergency. The over-prescribing of opioids began in the mid 1990s amid a marketing campaign telling doctors that they should prescribe more opioids to help ease patients’ pain.

Dr. Andrew Kolodny, co-director of opioid policy research at Brandeis University, said it is "silly" to blame DeWine — or any other state attorney general — for the increase in overdose deaths.

"There are certain levers attorney generals can pull to impact opioids, but they would not have any short-term impact on opioid deaths," he said.

Cordray's campaign cited state health data showing opioid overdose deaths tripled from 1,163 in 2011 to 3,495 in 2016, overlapping with DeWine’s tenure. Cordray was elected attorney general in November 2008 to fill a vacancy, and he lost his bid to keep the seat to DeWine in 2010. 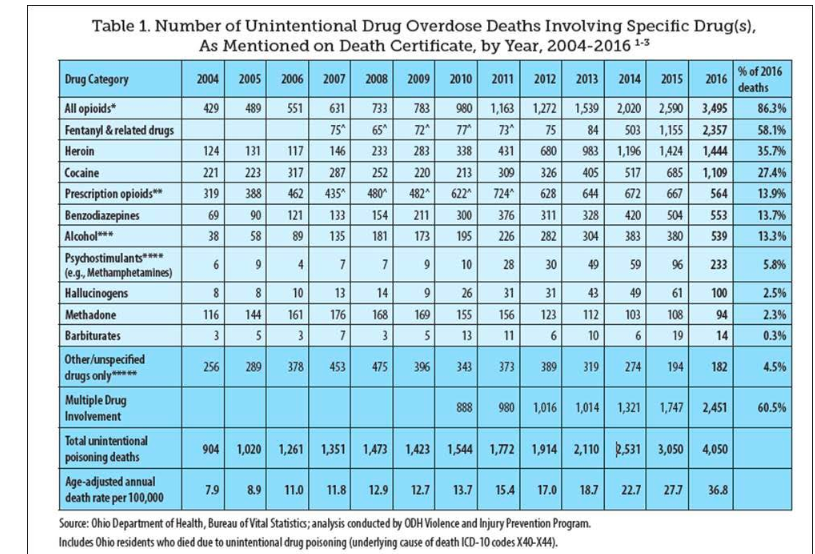 The data shows that one of the key reasons behind the spike in overdoses was the increase in deaths from fentanyl, which is up to 50 times more potent than heroin. These overdoses soared from 73 in 2011 to 2,357 in 2016.

To tackle the epidemic, DeWine filed has lawsuits against drug manufacturers in 2017 and drug distributors in 2018. He has also devoted money to assist addicts and victims, added scientists and equipment to test drugs, sponsored training for law enforcement, formed a heroin unit and negotiated an agreement to reimburse local agencies that use Naloxone, a treatment to stop overdoses.

But bringing the epidemic under control requires reducing the incidence of new people addicted and increasing access to treatment. Those goals are not under the purview of an attorney general.

"I do not think it makes sense to blame the attorney general," said Kolodny. "I think there is a lot of blame to go around but pointing to a single state official is silly."

Kolodny has criticized the federal response both under Trump and Barack Obama and called for more federal money.

Orman Hall, who worked in Gov. John Kasich’s administration on the opioid epidemic, said he doesn’t believe law enforcement will solve this problem.

DeWine effectively used his bully pulpit and put forth a good-faith effort to deal with the problem. However, as the attorney general, he doesn’t have access to funds to significantly impact treatment or the health care system.

DeWine countered that it was Cordray "who was asleep" on the issue of opioids when he was attorney general, a position he held before DeWine.

It’s also misguided to blame Cordray, because when he was attorney general the state didn’t yet fully understand the extent of the problem but was beginning to take action, Hall said.

"Everybody made a good faith effort," Hall said. "Nobody has done anything very successful."

"Cuts to funds for first responders and people in the community fighting the crisis."

Some of those cuts started before DeWine was attorney general and then were exacerbated amid a nearly $8 billion budget shortfall in 2011. Kasich initiated reductions to the state’s Local Government Fund, which is used by local governments for any purpose.

The cuts by the state led to cuts for police, fire and other local services.

Cordray spokesman Mike Gwin said that DeWine "failed in his responsibility to stand up for law enforcement - to fight for additional money in the state budget for badly-needed resources for the first responders, sheriffs, and police officers on the front lines of this fight."

However, as attorney general, DeWine doesn’t oversee the state budget signed by Kasich and can’t be blamed for state budget cuts.

Cordray said, "Opioid deaths have tripled on (Mike DeWine’s) watch and there have been cuts to funds for first responders and people in the community fighting the crisis."

Opioid deaths tripled between 2011 and 2016. However, there is no evidence that DeWine bears responsibility for the spike in overdoses, something that occurred nationally.

The state budget did cut money to local governments but as attorney general, DeWine doesn’t set the overall state budget.

There is a kernel of truth here in that the deaths did triple on DeWine’s watch and Kasich did sign state budgets that cut money to local governments, but Cordray has failed to provide evidence that as attorney general DeWine is to blame.

Ohio Department of Health, Fentanyl and Related Drugs Like Carfentanil as well as Cocaine Drove Increase in Overdose Deaths, 2016

The Cincinnati Enquirer, "Curing the drug crisis," (Accessed in Nexis) May 4, 2018

PolitiFact, "Cordray on point about increase in firearm deaths in Ohio," April 12, 2018