The Gateway Pundit
stated on June 21, 2018 in a headline:
"Migrant mother and ‘crying girl’ on Time cover never separated."

Denis Varela, father of the little girl depicted on the cover of Time magazine, cries during an interview at Puerto Cortes, Honduras, June 22, 2018. (AP)

A Time magazine cover photo of a young immigrant girl sobbing as she looked up at President Donald Trump became a symbol of the criticism over Trump’s immigration policies, but the iconic image was misleading.

Several headlines on Facebook challenged the image, including this headline by The Gateway Pundit which largely drew from an article by The Daily Mail.

Facebook flagged this story as part of its efforts to combat false news and misinformation on Facebook's News Feed. (Read more about our partnership with Facebook.)

The photo of the Honduran girl in McAllen Texas was taken by John Moore, a Pulitzer Prize-winning photographer for Getty Images. Moore joined a Border Patrol agent, Carlos Ruiz, for a ride along on the border June 12.

Moore took a photo of the girl crying next to her mother when they were detained by federal agents near the U.S.-Mexico border, and the cutline distributed by Getty said that the mother and her daughter were detained "before being sent to a processing center for possible separation."

Time then created a photo illustration using the image of the crying girl and a photo of Trump with the headline "Welcome to America." 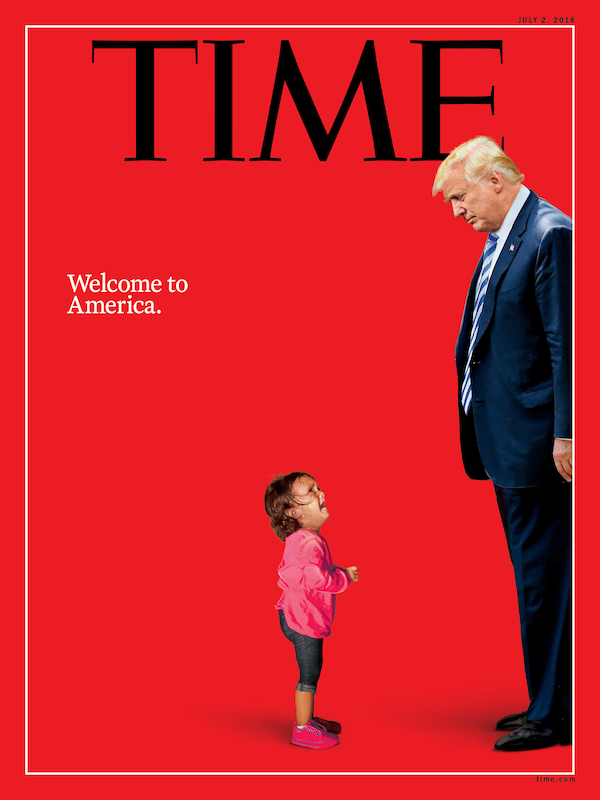 The photo came to symbolize Trump’s since-reversed policy that led to separating immigrant children from their parents at the border. But it also came to symbolize how viral images on social media can be used to create misleading impressions.

The girl’s father, Denis Javier Varela Hernandez, told reporters that the girl and her mother have been detained together and were not separated. Honduran deputy foreign minister Nelly Jerez confirmed Valera’s version of events to Reuters.

In an interview with CBS News, Ruiz said agents asked the mother, Sandra Sanchez, to put down her daughter, nearly 2-year-old Yanela, so they could search the mother.

"I personally went up to the mother and asked her, 'Are you doing okay? Is the kid okay?' and she said, 'Yes. She's tired and thirsty. It's 11 o'clock at night," Ruiz told CBS News.

Ruiz said the image was misleading.

"They’re using it to symbolize a policy, and that was not the case in this picture," Ruiz said. "It took less than two minutes. As soon as the search was finished, she immediately picked the girl up, and the girl immediately stopped crying."

Time interviewed Moore about taking the photographs at the border. Time posted a correction to that story June 19: "The original version of this story misstated what happened to the girl in the photo after she was taken from the scene. The girl was not carried away screaming by U.S. Border Patrol agents; her mother picked her up and the two were taken away together."

However, Time stood by the cover story.

"The June 12 photograph of the 2-year-old Honduran girl became the most visible symbol of the ongoing immigration debate in America for a reason: Under the policy enforced by the administration, prior to its reversal this week, those who crossed the border illegally were criminally prosecuted, which in turn resulted in the separation of children and parents. Our cover and our reporting capture the stakes of this moment," Time's editor-in-chief Edward Felsenthal said in a statement to CNN published June 22.

Moore told the Washington Post that Time corrected the story after he made a request minutes after it was published. He said that the picture "is a straightforward and honest image" showing a "distressed little girl" whose mother was being searched by border officials.

Moore said on Instagram that the girl and mother were taken into custody together and held at a detention center in Dilley, Texas.

Immigration and Customs Enforcement released a statement to the media that said Sanchez, 32, was arrested by border patrol on June 12 near Hidalgo, Texas. On June 17, 2018, Sanchez was transferred to ICE custody, and is currently housed at the South Texas Family Residential Center in Dilley, Texas. Her immigration proceedings are ongoing.

A Getty photographer took a photo of a girl crying when her mother was detained by the Border Patrol. The girl’s father, as well as a Border Patrol agent, confirmed that the girl and her mother were not separated. The agent said they were separated for a few minutes while the mother was searched.

Time published a correction in a story in which the photographer was interviewed stating that the girl was not carried away by agents and the two were taken away together.

The Gateway Pundit, "SHOCK: Migrant Mother and ‘Crying Girl’ on TIME Cover Never Separated; Mom Deported in 2013, Left Husband With Good Job, 3 Others, paid coyote $6k to sneak back in US," June 21, 2018

Time, "‘All I Wanted to Do Was Pick Her Up.’ How a Photographer at the U.S.-Mexico Border Made an Image America Could Not Ignore," June 19, 2018

Time, "A Reckoning After Trump’s Border Separation Policy: What Kind of Country Are We?" June 21, 2018

Blue Lives Matter, "Girl In Iconic Photo Was Never Taken From Mom, But Mom Took Her From Dad," June 22, 2018

Washington Post, "The crying Honduran girl on the cover of Time was not separated from her mother," June 22, 2018

New York Times, "She Became a Face of Family Separation at the Border. But She’s Still With Her Mother," June 22, 2018