Joe Manchin
stated on June 22, 2018 in a tweet:
"Pat Morrisey joined a federal lawsuit to allow insurance companies to deny coverage for people with pre-existing conditions."

Sen. Joe Manchin of West Virginia -- a vulnerable Democratic Senator in a state that Donald Trump won by more than 40 points in 2016 -- is accusing his Republican opponent of seeking to take away health insurance protections for people who have pre-existing conditions.

In a tweet, Manchin said that Patrick Morrisey, the state’s elected attorney general and the GOP’s nominee for the Senate seat, "joined a federal lawsuit to allow insurance companies to deny coverage for people with pre-existing conditions."

West Virginians are outraged to learn Pat Morrisey joined a federal lawsuit to allow insurance companies to deny coverage for people with pre-existing conditions. Today, Manchin's campaign launched https://t.co/6W6SsQo3xb to give the people of WV the chance to speak out. #wvsen

Historically, getting rid of pre-existing condition protections is an unpopular view. A March 2018 poll by the Kaiser Family Foundation, found that 84 percent of Democrats, 68 percent of independents and 59 percent of Republicans favor keeping insurers from charging people with pre-existing conditions more for health insurance, which is the existing policy under Obama’s 2010 health care law.

Indeed, Manchin tweeted about the issue several other times recently and launched an online petition effort.

So is Manchin correct that Morrisey "joined a federal lawsuit to allow insurance companies to deny coverage for people with pre-existing conditions"? Pretty much, yes.

Manchin is referring to a lawsuit filed in a U.S. district court in Texas on Feb. 26, 2018. The lawsuit was signed by 18 attorneys general and two governors, all of them Republicans. The suit challenges the Affordable Care Act, arguing that "the ACA is unlawful" and seeking to enjoin, or block, its operation.

One of the attorney generals who signed onto the lawsuit is Morrisey: 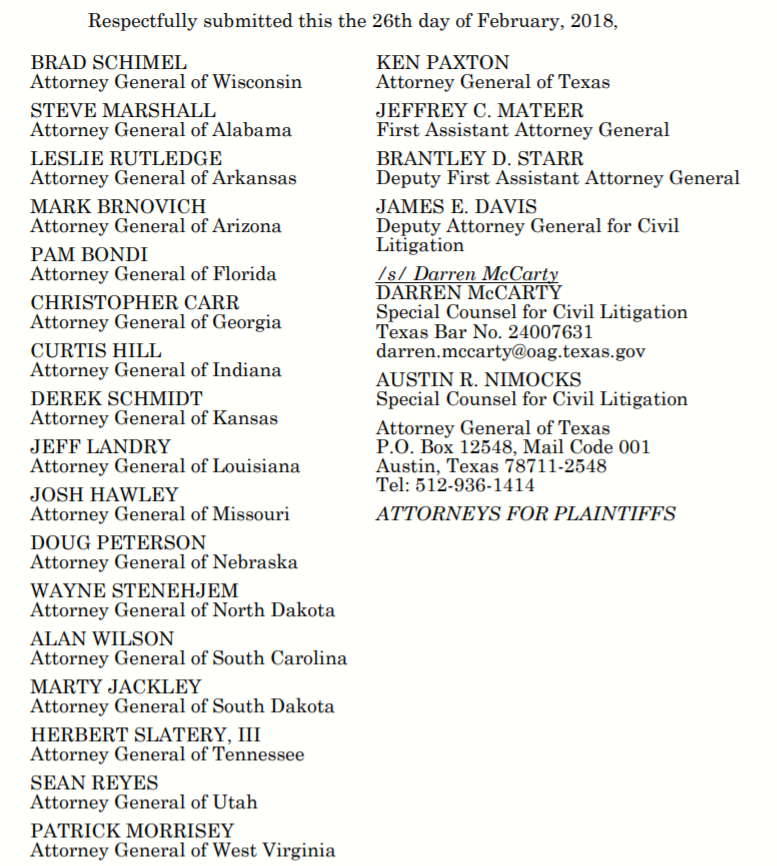 He is listed as a signatory on a court document in the case dated as recently as June 20, 2018, or two days before Manchin's tweet. We could not find any subsequent statement by Morrisey that he had withdrawn his support for the legal action.

Here’s the gist of the lawsuit’s argument.

The lawsuit contends that -- with the tax penalty now gone -- the individual mandate is no longer constitutional and, as a result, the law should be either largely or entirely thrown out.

If granted, would the lawsuit end the pre-existing condition protections under the ACA?

"There would be much more damage beyond the issue of people with health problems being denied coverage, but that would in fact be one outcome," said Linda Blumberg, a health policy analyst at the Urban Institute.

Blumberg said that if you got rid of insurance regulations like those in the ACA and then tried to require insurers to cover all comers -- a policy known as "guaranteed issue" -- then "insurers would respond by setting their premiums so high" that they’d be out of reach for most customers, and/or "offer extremely high deductibles and other types of out-of-pocket requirements."

The impact of a court ruling would take time to filter through the health insurance system, but the scale is potentially large.

A Kaiser Family Foundation analysis found that "52 million non-elderly adults had pre-existing conditions that would have made them uninsurable prior to passage of the ACA."

"Manchin is addressing what is probably the major implication of the lawsuit," rather than just "a detail," said Christine Eibner, health policy analyst with the RAND Corp.

Usually, the federal government would defend an existing law in court, but the Trump administration has decided to take the attorney generals’ side in the case.

Morrrisey's camp fired back at what it said was the implication of Manchin's tweet -- that Morrisey opposes protections for pre-existing conditions. He doesn't, and he wants them restored in whatever comes next.

While Morrisey believes that law should be repealed, "help should be provided to those who need it most, including those with pre-existing conditions," said Nathan Brand, a spokesman for the Morrisey campaign.

It’s worth noting that the lawsuit is still a long way from success.

"My guess is that the Supreme Court may take a pass on this, and for sure it won’t be going anywhere before the 2018 elections," said Gail Wilensky, who headed Medicare and Medicaid under President George H.W. Bush.

That said, Manchin’s tweet didn’t say that pre-existing condition protections are going to be eliminated immediately. Rather, he tweeted that Morrisey had joined a lawsuit that sought that end.

Morrisey told PolitiFact that he supports some form of protection for those with pre-existing conditions. Nevertheless, Morrisey did join a lawsuit filed by numerous state Republican officials that asks a court to rule all or part of the 2010 health care law unconstitutional and to prevent the enactment of rules, regulations or other actions under the law.

Various health-policy specialists agreed that such a decision from the court would effectively eliminate protections for people with pre-existing conditions.

The statement ia accurate but needs additional information, so we rate it Mostly True.