Donald Trump
stated on March 8, 2018 in a cabinet meeting at the White House:
The last private rocket launch "cost $80 million. If the government did it, the same thing would have cost probably 40 or 50 times that amount of money. I mean, literally."

President Donald Trump looked to the stars, or at least near-Earth orbit, to cite yet another example of the private sector getting things done better and cheaper than the government.

With rocket models decorating the table where Trump and his Cabinet met March 8, Trump singled out the private operators.

"Rich guys, they love rocket ships, and that's good," Trump said. "That's better than us paying for it. And I noticed the prices of the last one, that they said it cost $80 million. If the government did it, the same thing would have cost probably 40 or 50 times that amount of money. I mean, literally."

We thought about Trump’s cost-multiplier estimate and wondered if it would cost NASA $3.2 billion to do what the private rockets do.

The comparison is a stretch for several reasons, but as Jason Davis at the Planetary Society put it, the main one is "it’s sort of like comparing a Ford Focus to a Cadillac Escalade."

The private rockets don’t need to go higher than low-Earth orbit. SpaceX, for example, carries supplies to the International Space Station, which is about 250 miles above the earth. With the shorter distance, the rockets can be smaller. The SpaceX Falcon 9 is about 230 feet high.

NASA has left that closer-in zone to the private firms since 2006. Its field of play reaches further out, to the moon and beyond. NASA has been developing the Space Launch System, a veritable beast of a rocket where the shortest configuration is 322 feet tall.

With that in mind, let’s look at the dollars.

The list price of the most basic SpaceX rocket, the Falcon 9, is $62 million. If you want more lift, the Falcon Heavy goes for $90 million. So $80 million is a reasonable midpoint.

Davis noted, though, that prices can run higher.

"The Air Force paid $97 million for the Falcon 9 that launched the DSCOVR climate satellite," he said.

The key here is that this price tag covers the cost of producing and operating the rocket for each launch. Part of the money goes to recover the cost of designing and developing the rocket, and for that, it’s important to note that NASA and the companies shared the tab.

In 2011, to ensure that two companies, SpaceX and Orbital ATK, had the capacity to supply the International Space Station, Congress provided $821 million, or about 44 percent of what it took to develop and test the commercial systems.

That government investment made it easier for the firms to be commercially viable.

Joshua Colwell, professor of planetary science and assistant director of the Florida Space Institute, told us having a guaranteed buyer also helped.

"SpaceX got to where it is in part thanks to lots of government contracts to send supplies to the International Space Station," Colwell said.

NASA is building the Space Launch System to do much more than the private rockets. It will be safe enough to carry astronauts in a capsule called Orion — a separate huge expense in its own right — or pure cargo. As for distance, the minimum range is the moon, or about 239,000 miles from Earth, in contrast to the 250 miles distance to the International Space Station. 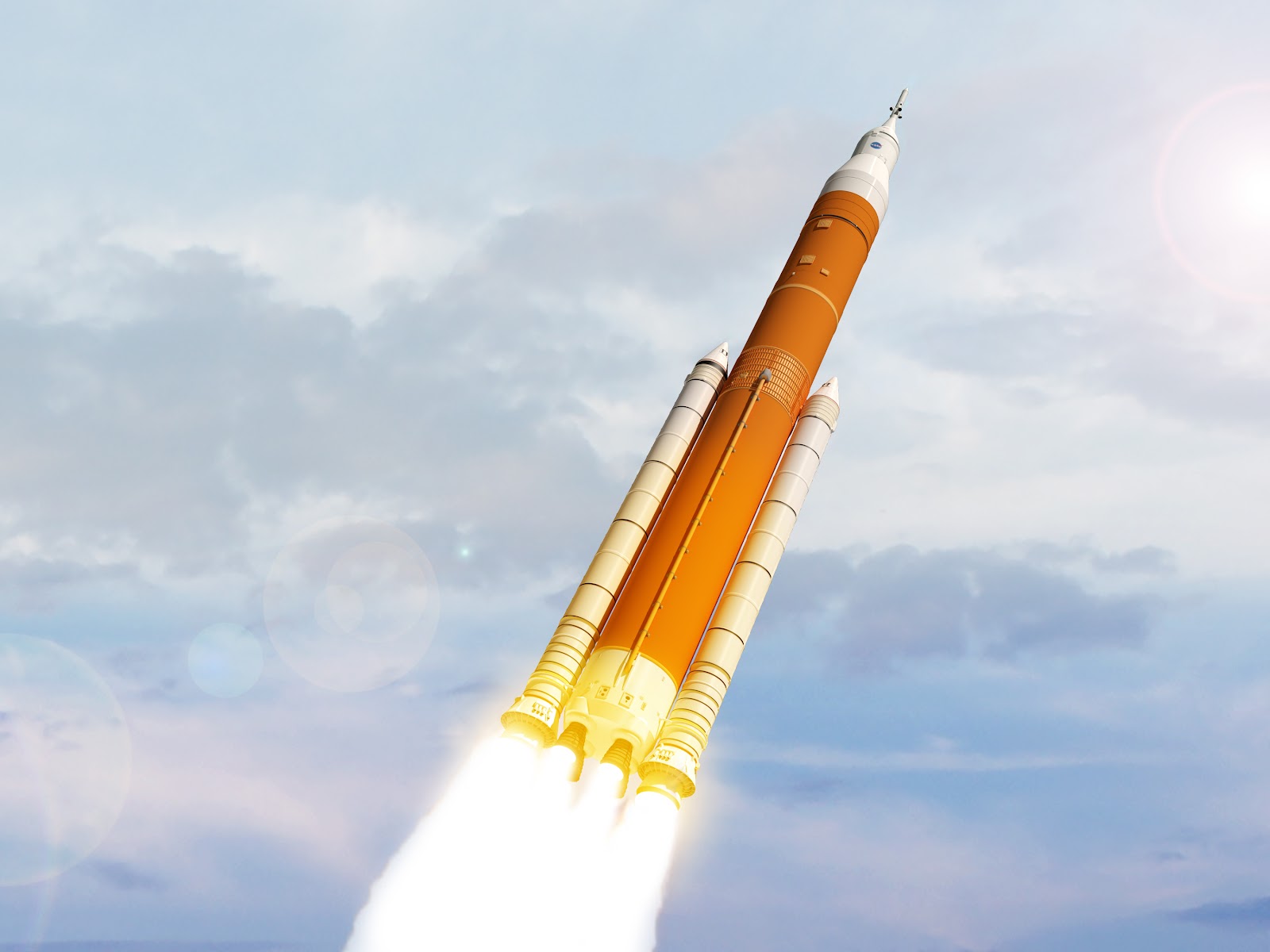 An artist’s rendition of the Space Launch System carrying the Orion capsule in to space. (NASA)

This big rocket and its Orion capsule are scheduled for their first voyage in 2020. So, as a practical matter, there is no ongoing series of launches to compare to the private operators.

There are a few ways to tackle the question.

Davis at the Planetary Society looked at the development cost.

"The Space Launch System currently costs NASA more than $2 billion per year, and it's still under development," Davis said. "It will go on two test flights over the next five years, so I suppose you could calculate that you're paying about $5 billion per flight."

On the other hand, this big rocket could be used more often over a longer stretch of time. The website Ars Technica is into rocket science and rocket budgets. In 2016, it estimated development and operation costs of $60 billion for the rocket, the Orion capsule and infrastructure on the ground at the Kennedy Space Center over the next two decades. Assuming one flight each year, the package cost of rocket, capsule and ground operations would come to $3 billion per flight.

Ars Technica relayed a much slimmer price tag from NASA manager Bill Hill. In 2016, Hill said he was aiming for an annual cost of $2 billion a year with two flights annually by the end of the 2020s.

That would drive the cost down to $1 billion per flight.

Again, this is neither certain nor directly comparable to today’s private launches.

Colwell puts no stock in Trump’s 40-50 times estimate. At the same time, he takes the larger point.

Trump said that at $80 million per launch, private rockets are about 40 to 50 times cheaper than NASA would spend if it did "the same thing."

The $80 million figure is roughly accurate, but the key flaw in the statement is that NASA is not doing the same thing. As part of a policy decision made a decade ago, NASA has left the shorter distance work to the private sector while it focuses on getting to the moon and beyond.

But fundamentally, this is a comparison between a Ford Fusion and a Cadillac Escalade. One will be much more expensive than the other, but they are used in very different ways.

PolitiFact Rating:
Half True
The last private rocket launch "cost $80 million. If the government did it, the same thing would have cost probably 40 or 50 times that amount of money. I mean, literally."
Donald Trump
President of the United States
https://factba.se/transcript/donald-trump-remarks-cabinet-meeting-march-8-2018

PolitiFact Democratic guest columnist and former U.S. Rep. David Altmire took issue with this fact-check, saying Trump's literal words "were simply too far off to earn the benefit of the doubt" and should have earned a False rating.

Planetary Society, If you come at the Space Launch System, you best not miss, March 9, 2018