Ryan Zinke
stated on March 13, 2018 in testimony before a Senate committee:
A Trump administration proposal for the Interior Department "is the largest investment in our public lands infrastructure in our nation's history."

Zinke specified that he was referring to the president's budget proposal, which would create a fund to provide "up to $18 billion over 10 years for maintenance and improvements in our national parks, our national wildlife refuges, and Bureau of Indian Education funds."

When we took a closer look, we found Zinke’s assertion to be dubious. There is little chance that the Civilian Conservation Corps, President Franklin D. Roosevelt’s New Deal-era program, will lose its place atop the list of federal programs that have supported public-lands infrastructure.

The president’s budget for fiscal year 2019 proposes "a new Public Lands Infrastructure Fund" for repairs and improvements at places such as national parks and wildlife refuges.

The administration estimates that increased energy development on federal lands and in federal waters "has the potential to generate up to $18 billion over 10 years for parks and other public lands infrastructure."

However, there is no certainty that the idea will win the necessary congressional approval. It’s common for presidential budget proposals to wither on the vine, even when the president has a Congress controlled by his own party.

Also, Zinke said "up to $18 billion," meaning that the final amount could be well below that.

Generating any money at all to fill the fund’s coffers would require additional energy development from federal lands and waters. New development seems possible in the Trump era. But the number of new projects will depend heavily on international market conditions for oil and gas, which are currently modest by historical standards.

Finally, this doesn’t take into account any cuts to public lands infrastructure that emerge from elsewhere in the administration’s budget. Overall, the proposal would cut the Interior Department by 15 percent.

For the sake of this fact-check, let’s assume that the federal government is able to come up with enough new drilling projects to spend the full $18 billion on public lands infrastructure and that it avoids any offsetting maintenance cuts from other parts of the budget.

Even in that scenario, Zinke’s proposal pales compared to the investments made under the Civilian Conservation Corps. 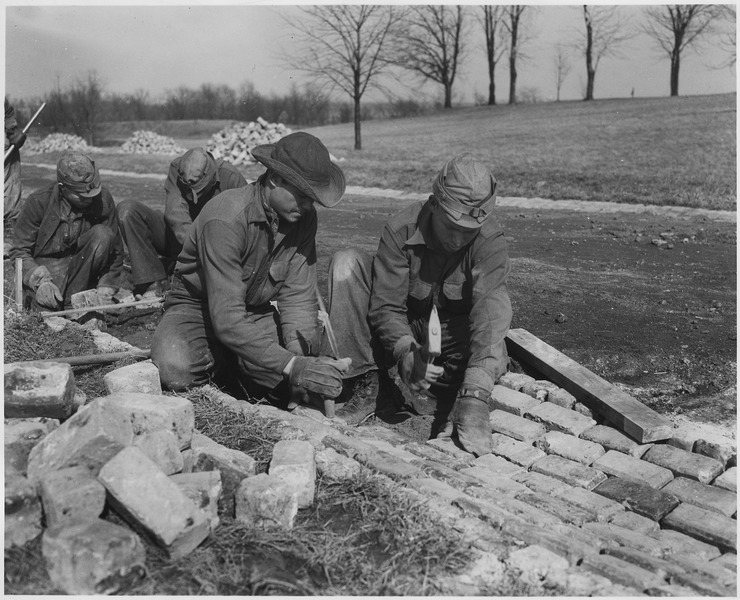 Members of the Civilian Conservation Corps circa 1933. (National Archives)

How does the CCC cost compare with Trump plan?

Roosevelt established the Civilian Conservation Corps in the midst of the Great Depression and just over a month after he was inaugurated in 1933. The program paid unmarried men (and only men) between 18 and 25 years of age to do unskilled labor to conserve and develop natural resources on public lands.

Workers received room, board and $30 a month, most of which had to be sent back home to the worker’s family. Some received educational services in the camps, with tens of thousands learning to read for the first time.

Among the corps’ achievements were the planting of more than 2 billion trees, the construction of more than 125,000 miles of roads and trails, the creation of more than 6 million erosion control structures, the stringing of 89,000 miles of telephone lines, and 6 million work days fighting forest fires. All told, 3.5 million men took part during the program’s nine years of existence, spread over more than 1,000 constantly shifting camps at any given time.

"There is no doubt in my mind that the CCC was the most groundbreaking program to ever influence our park system at the local, state, and national levels," said Neil M. Maher, author of the book Nature’s New Deal: The Civilian Conservation Corps and the Roots of the American Environmental Movement. The corps "basically built the infrastructure of our National Park system."

The most frequent estimate of the program’s cost is a cumulative $3 billion in outlays during its nine-year life. From our research, this figure appears to be credible.

The CCC’s director wrote in 1939 that it had cost $2 billion; that was two-thirds of the way through the program’s life. And according to a Park Service study, the annual annual cost per CCC enrollee was $1,004 per year. If you assume that the average tenure of the CCC’s 3.5 million workers was about a year, that would produce a cumulative cost around $3 billion.

Such calculations "sound right — millions of young men, camps to house them, food and uniforms, and they were paid," said Steven Stoll, an environmental historian at Fordham University.

Once you factor in inflation, $3 billion spent in the 1930s would be the equivalent of about $53 billion today — about three times bigger than even the fully funded Trump proposal.

The CCC’s investment appears even more massive when viewed as a percentage of federal spending.

During the 1930s, when federal outlays were more modest, the CCC’s $3 billion investment accounted for just over 4 percent of all federal outlays that were made over the program’s nine-year period.

By contrast, the fully funded Trump proposal would account for somewhere around four ten-thousandths of 1 percent of federal outlays during its 10-year life.

It’s true that the CCC created more than 700 state parks and upgraded many others, in addition to its efforts on federally owned land. Ultimately, though, the point is moot: Zinke didn’t say the proposal is the largest investment in federal lands infrastructure. He said "public lands infrastructure," and state and local parks count as "public lands."

Zinke said that a Trump administration proposal for the Interior Department "is the largest investment in our public lands infrastructure in our nation's history."

It’s far from assured that the maximum figure of $18 billion in the proposal will ever be reached if enacted. Beyond that, though, Roosevelt’s $3 billion investment in the Civilian Conservation Corps would amount to $53 billion today, and it accounted for vastly more than the Trump proposal as a percentage of federal spending at the time.

PolitiFact Rating:
False
A Trump administration proposal for the Interior Department "is the largest investment in our public lands infrastructure in our nation's history."
Ryan Zinke
Interior Secretary
https://twitter.com/WstrnPriorities/status/973634854142099457

Email interview with Gregory E. Smoak, director of the American West Center at the University of Utah, March 14, 2018

Email interview with Neil M. Maher, historian who teaches at the New Jersey Institute of Technology and Rutgers University-Newark and author of the book Nature’s New Deal: The Civilian Conservation Corps and the Roots of the American Environmental Movement, March 15, 2018