Lupe Valdez
stated on May 23, 2018 in a New York Times news story:
"One in six Texans don’t have health care. We’re the most uninsured state in the U.S."

Lupe Valdez, shown here in a May 2018 pre-runoff debate with Andrew White, later made a Mostly True claim about how Texas ranks for health care and health insurance coverage (James Stacy/Austin American-Statesman, May 11, 2018).

Valdez was quoted in a May 23, 2018, New York Times news story saying: "One in six Texans don’t have health care. We’re the most uninsured state in the U.S."

It’s an exaggeration, we’d suggest, to say that all uninsured individuals don’t have any health care. As we concluded in a 2010 fact-check, many avenues exist to make care available--including paying out of pocket and going to hospital emergency rooms. Still, many people don't get the care they need.

A slightly different 1-in-6 statement appears on Valdez’s campaign website: "1 in 6 Texans lack health insurance," Valdez says on the "Health Care" portion of the site. She goes on: "The truth is, we’re already paying for universal healthcare, we are just doing it in the most expensive and inefficient (way) possible."

Valdez, calling Republican Gov. Greg Abbott foolish for rejecting the option of expanding Medicaid in Texas as permitted by the Obamacare law, further says that as governor she’ll push to reverse his decision.

We’ve found validity to other claims that Texas has the greatest share of residents who lack health insurance. After Valdez spoke, we decided to look again at how Texas ranks.

Valdez’s campaign didn’t respond to our email asking for her backup. But to our inquiry about the latest available data, Paul Fronstin of the Washington, D.C.-based Employee Benefit Research Institute, who previously advised us on the number of uninsured residents by state, pointed by email to a September 2017 Census Bureau report estimating that in 2016, Texas still had the nation’s greatest share of residents without health insurance, 16.6 percent--or 1 in 6 people.

The Texas rate, the report says, was down from 17.1 percent the year before and 22.2 percent in 2013, according to information collected in the American Community Survey. In 2016, the report says, Alaska ranked second nationally with 14 percent of residents lacking coverage and Oklahoma was third with a 13.8 percent uninsured rate.

Also answering our query by email, the Kaiser Family Foundation’s Chris Lee shared its calculations indicating that in 2016, Texas led other states with 15 percent of residents lacking health insurance, per research connected to the bureau’s Current Population Survey. According to the foundation, states ranking second and third in residents lacking coverage were Alaska (14 percent) and Arizona, Florida, Georgia, Mississippi, Utah (12 percent each).

Lee guided us next to a Kaiser chart showing that Texas in 2016 also had the nation’s greatest share of uninsured residents younger than 65 (when residents qualify for Medicare). The Texas uninsured rate of 17 percent outpaced No. 2 Alaska’s rate, 15 percent, a foundation chart says.

We spotted a more recent nongovernmental estimate. In May 2018, Gallup said that surveys the polling company took in 2017 asked respondents: "Do you have health insurance coverage?" For the 10th straight  year, Gallup said, Texas had the nation’s highest rate of uninsured residents, 22.5 percent, which was still an improvement from the uninsured rate Gallup gauged for Texas in 2013, 27 percent. In 2017, Gallup gauged, Massachusetts residents had the nation’s lowest uninsured rate in 2017, 4 percent. 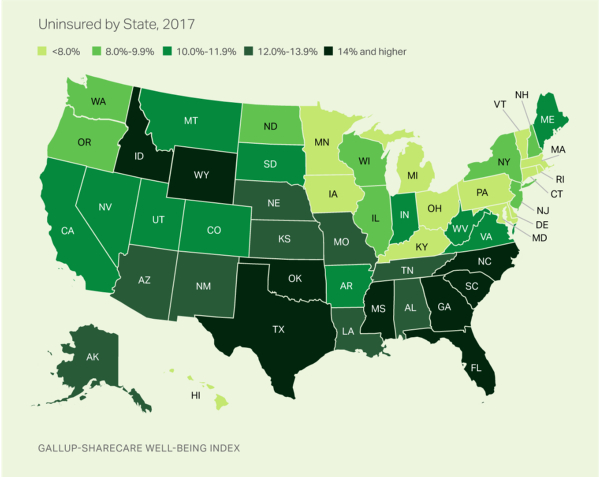 Valdez said: "One in six Texans don’t have health care. We’re the most uninsured state in the U.S."

One in six Texans in 2016 lacked health insurance, according to government surveys, and the state remained No. 1 for its share of residents without coverage. It’s an exaggeration to say that all uninsured people have no health care.

News story, "Lupe Valdez Prepares to Face Greg Abbott in Texas: ‘This Election Is Not Going to Be Bought,'" The New York Times, May 23, 2018

Fact-checks, PolitiFact Texas, "Gov. Rick Perry says everyone has access to health care coverage, even without insurance," April 27, 2010;  "Donna Howard says Texas No. 1 in uninsured residents across the board," July 1, 2015