Jim Justice
stated on August 17, 2018 in a tweet:
"According to SCUBA divers, Summersville Lake is the clearest freshwater lake east of the Mississippi River."

Does West Virginia have the clearest freshwater lake east of the Mississippi River? Gov. Jim Justice said so in a tweet.

In the Aug. 17 tweet, Justice said, "According to SCUBA divers, Summersville Lake is clearest freshwater lake east of the Mississippi River. This led to earning its name as ‘The Little Bahamas of the East.’ Check it out for yourself today!" (SCUBA is capitalized because it is an acronym for Self-Contained Underwater Breathing Apparatus.)

According to SCUBA divers, Summersville lake is clearest freshwater lake east of the Mississippi River. This led to earning its name as “The Little Bahamas of the East.” Check it out for yourself today! https://t.co/iAUQIaqat5 pic.twitter.com/XdQr7S9kll

Summersville Lake is a man-made lake in the southern part of West Virginia. The Huntington District of the U.S. Army Corps of Engineers created the lake in the 1960s. 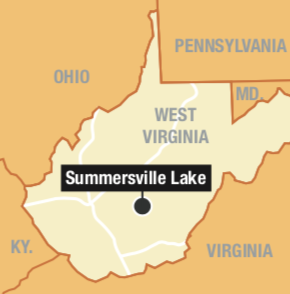 The article describes the lake as great for swimming, boating, and underwater exploration. The destination has dive sites where rock formations can be seen 100 feet underwater.

However, the WV Tourism article did not offer a specific source for the claim. We contacted the office, and they did not respond.

When we reached out to the U.S. Army Corps of Engineers’ Huntington District, Toby Wood, project manager for Summersville Lake, said that the label "The Little Bahamas of the East" originated with a SCUBA magazine.

Facebook posts
stated on September 27, 2021 in social media posts
“Were you aware the $3.5 Trillion Human Infrastructure package includes an animal agriculture tax of $2,600‼️ per head of cattle? $500 for swine!!!"

"We consider that a claim-to-fame, and we repeat it often," Wood said.

In Google searches, we found references to that nickname attributed to Skin Diver magazine but did not locate the original article.

More broadly, however, Wood has "no way of knowing if the lake is the ‘the clearest freshwater lake east of the Mississippi River,’ as the governor claimed."

We reached out to Peter Oliver, editor-in-chief of the National Association of Underwater Instructors’ magazine, Sources, and he said that from his experience, Summersville Lake has the same color as most lakes and reservoirs.

"You’d be OK, I think, to call Summersville ‘one of the clearest,’ but it has that green tint common to almost all freshwater lakes and reservoirs. The water in the Florida spring systems is what we usually call ‘gin clear’ and since the water does not stand in the small lakes but flows out it stays clear," Oliver said.

Meanwhile, Christine McCrehin of the American Water Resources Association told PolitiFact that "her organization does not track the information about the clarity of lakes."

Justice tweeted, "According to SCUBA divers, Summersville Lake is the clearest freshwater lake east of the Mississippi River."

This facts on this claim are more opaque than the governor lets on. There’s no question that Summersville Lake attracts divers who appreciate its clear waters, and there is evidence that it has long been called "the Little Bahamas of the East."

Justice’s tweet went beyond that, saying specifically that the lake is the clearest in the eastern United States. An Army Corps of Engineers and several independent experts were unable to point to evidence for that first-place ranking.

The statement contains an element of truth, but it offers a specific No. 1 ranking without a comprehensive study to back it up. We rate it Mostly False.

Email interview with Toby Wood, project manager for Summersville Lake in the Huntington District of the U.S. Army Corps of Engineers, Aug. 27, 2018