Bloggers
stated on September 24, 2018 in an image on Facebook:
Says that Dianne Feinstein said, "When the gunman realizes that nobody else is armed, he will lay down his weapons and turn himself in…. that’s just human nature."

A quote allegedly from Sen. Dianne Feinstein, D-Calif., saying gunmen will lay down their weapons when they see their victims are unarmed is fabricated.

The page Principle News shared the quote in a post on Sept. 17.

It quotes Feinstein as saying, "When the gunman realizes that nobody else is armed, he will lay down his weapons and turn himself in. That's human nature." 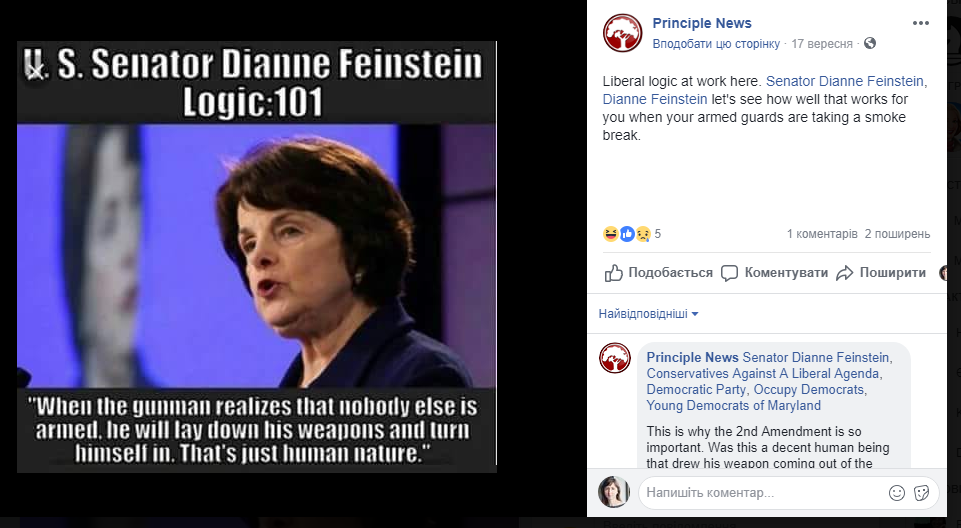 This image was flagged as part of Facebook’s efforts to combat false news and misinformation on its News Feed. (Read more about our partnership with Facebook.)

Viral image
stated on September 26, 2020 in a Facebook post
A letter from Mississippi Gov. Tate Reeves says that at “the beginning of October 2020 the statewide mask requirements will be abolished.”

The statement on the meme about gunman is a fabricated quote that first appeared February 2013 on the website Palookaville Post. The story appeared after Feinstein proposed a bill that would "ban the sale, transfer, manufacturing or importation of 150 specific firearms." The material from the Palookaville Post article was quoted on several websites.

The original website doesn’t operate now, but the full article can be found in the archive of the WayBack Machine.  It is bylined by a fake author "Jimmy Olsentwins." The website itself was satirical and mostly active in 2013.

For the next five years the false post bounced around the internet (especially in memes) to criticize Feinstein.

Bloggers
stated on September 24, 2018 an image on Facebook:
Says that Dianne Feinstein said, "When the gunman realizes that nobody else is armed, he will lay down his weapons and turn himself in…. that’s just human nature."