It’s a tough time to be the Dairy State.

The family farms that long formed the backbone of the state’s milk production are increasingly being forced out of business. And the U.S. agriculture secretary came to town and cast doubt on the future viability of any small dairy farms.

Trade tensions are certainly having an impact, but is it reasonable to blame them — and Trump — for that many closures?

Dairy was in trouble long before Trump

Pocan’s is roughly correct on the number of closures.

But Wisconsin dairy farms closing is hardly a new trend.

That trend has indeed worsened under Trump, however.

Many factors conspire against farmers

Pocan blamed the closures not only on Trump, but specifically on the president’s trade wars.

Defending the claim, Pocan spokesman Usamah Andrabi pointed to a category of Chinese dairy exports that dropped from mid-2018 to mid-2019 amid retaliatory tariffs.

"That being said, I think we can reasonably attribute the majority of these farm closures to the effects of China’s tariffs/Trump’s trade war," Andrabi said.

Pocan’s claim — and his spokesman’s defense — oversimplify an industry facing a complex set of economic pressures.

How do Wisconsinites feel about President Trump? Well, he's:

How do you think? pic.twitter.com/bjN7hL2Wn1

The Milwaukee Journal Sentinel summarized the demand struggles this way as part of its Dairyland in Distress project, an exhaustive examination of the state’s trademark industry.

Sales of milk as a beverage have fallen steadily since the 1970s, with fewer parents encouraging their children to drink milk than ever before. Soy milk and almond milk — which dairy farmers point out aren't real milk — and scores of sports drinks have flooded the beverage market.

And although consumption of cheese, yogurt and butter have all increased, they've not always kept pace with runaway production. Today, for instance, U.S. commercial and government cheese stockpiles are at about 1 billion pounds — the highest level in a century.

At the same time, foreign markets for American dairy products have shrunk in response to tariffs that President Donald Trump placed on foreign steel and aluminum. Cheese shipments to China have fallen almost 65 percent, according to industry figures, and exports to Mexico are down more than 10 percent.

So tariffs are a factor in limiting demand, but far from the only one.

And supply is a major problem as well.

Advances in genetics and feed science mean the average cow today produces about four times more milk than it would have in the 1950s. This leads to a market saturation that both generates waste — some farmers are forced to dump milk down the drain for lack of a buyer — and contributes to reduced prices.

Milk prices have nudged up in recent months but before that went through a yearslong downturn that often left prices below the break-even point for farms.

"There were four years of the depressed milk prices before the trade war started," Laurie Fischer, CEO of the American Dairy Coalition, told PolitiFact Wisconsin. "If you go back and you look, we've always had attrition going on." 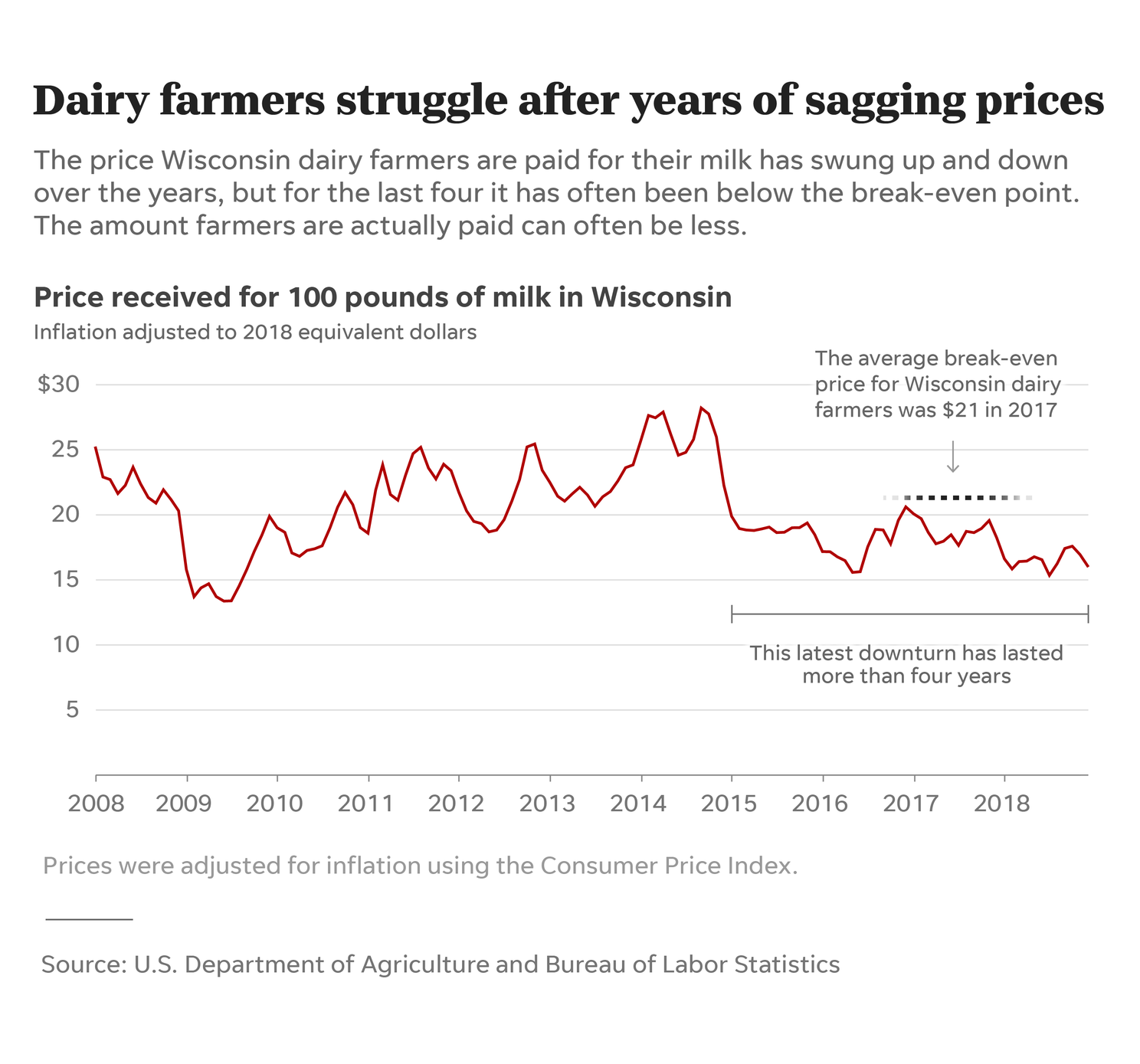 Pocan said Trump is "waging a trade war against WI farmers" that has forced more than 1,600 dairy farms to close.

Setting aside the rhetorical overreach of calling it a trade war "against" state farmers, Pocan’s finger-pointing is off the mark.

But it’s not reasonable to attribute all the closures to Trump and trade tension when this trend dates back more than a decade. Milk prices, over-production and changing consumer demand have all played key roles in devastating the dairyland economy and shuttering Wisconsin farms.

Pocan’s claim contains an element of truth but ignores critical facts that would give a different impression. That’s what we call Mostly False.

Milwaukee Journal Sentinel, Dairy farmers are in crisis — and it could change Wisconsin forever, Oct. 18, 2019