Bloggers
stated on January 4, 2019 in a tweet:
New U.S. Rep. Rashida Tlaib tweeted "Americans have spent decades raping and pillaging my people. What goes around comes around."

Newly minted Democratic U.S. Rep. Rashida Tlaib has made headlines during her first week in office, from being the first Palestinian woman elected to the U.S. House to using profanity as part of a vow to impeach President Donald Trump.

Now, an offensive tweet supposedly made by Tlaib is going around social media.

"Americans have spent decades raping and pillaging my people. What goes around comes around. #FridayFeeling" 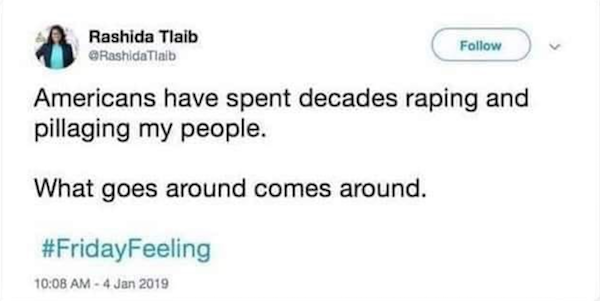 Tlaib’s real account is verified and has the blue checkmark badge by her name. The tweet referenced in the Facebook post came from an account that is not – and one that has since been deleted or removed from the social media platform.

The fake account also tried to make it appear as if Tlaib’s name was spelled correctly, but it wasn’t. It used an uppercase "i" in place of the lowercase "L" in her last name. When her name is spelled accurately on Twitter, the result is that the lowercase "L" reaches higher than the "T" in her last name. When misspelled with an uppercase "i", that faux-"L" only comes in at about the same height as the T.

Moreover, Tlaib’s Twitter following is around 277,000, a number more on par for a member of the U.S. House than the 30 followers the hoax account had amassed before it was removed.

NBC, Tlaib apologizes — for 'distraction,' not for cursing Trump or impeachment charge,