Bernie Sanders
stated on July 10, 2019 in an op-ed in the Washington Post:
"42 percent of (Walmart’s) associates are black."

Racial and economic inequality are key issues for Bernie Sanders. In a Washington Post op-ed on the disparities between blacks and whites, the Democratic presidential candidate brought the two themes together. He said "the black-white wealth gap could be closed by targeting the extreme wealth at the very top."

"The straightest path to racial equality is through the one percent," Sanders wrote July 10. "A system where we don’t address both racial and economic disparity is a system in which some people, especially African Americans, are going to be left behind."

Sanders sharpened the point with the example of Walmart.

"Walmart is the largest private employer of African Americans in the country," Sanders wrote. "42 percent of its associates are black. And it pays its employees below a living wage — even while the Walton family owns more wealth than the bottom 40 percent of Americans."

Walmart is the nation’s largest private employer, which gives it an edge in hiring the largest number of African Americans. And Sanders cited PolitFact to back up his assertion about the Walton’s wealth.

But Sanders exaggerates the fraction of Walmart associates who are African American. His 42% figure would mean that nearly half of all Walmart sales associates are black. That’s not the case.

According to the Walmart report he cited, 42% of the company’s associates are people of color. Sanders’ spokeswoman Sarah Ford acknowledged that would include many workers other than African Americans.

She said the campaign "regrets" the error and will "endeavor to correct going forward."

Here’s the diagram from page 8 of the Walmart report. 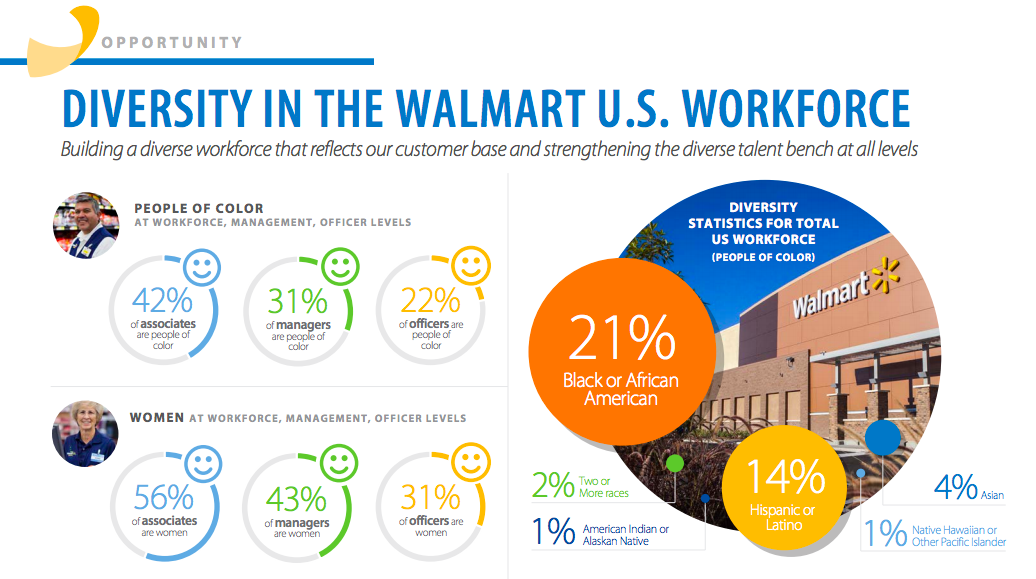 The large orange 21% circle with the fraction of all workers who are black or African American includes a range of job categories, such as associates, managers, executives, technicians and more.

For associates alone, a chart deeper in the report (page 38) shows that 22.5% of sales workers are African American. The latest Walmart report has about the same number, 22.2%.

Blacks represent about 13% of the American workforce.

The actual number is 22.2%. This is almost twice the fraction of blacks in the workforce, but about half as large as Sanders said. We rate this claim False.

Washington Post, Bernie Sanders: The straightest path to racial equality is through the one percent, July 10, 2019

USA Today, Who is the largest employer in your state? Walmart top in nation with Amazon second., May 28, 2019