Cody Smith
stated on March 6, 2019 in a capitol report:
"Our state transportation department already has a heavy debt load and has paid more than $700 million in debt payments in just the last two years."

Infrastructure is one of Gov. Mike Parson’s top priorities in the 100th legislative session, and some representatives have followed suit.

Smith wanted to do this by appropriating funds from general revenue to state infrastructure instead of taking out more bonds.

"Our state transportation department already has a heavy debt load and has paid more than $700 million in debt payments in just the last two years," Smith wrote in a Capitol report sent by his office.

Has the Missouri Department of Transportation really paid more than $700 million in debt payments in the last two years?

Let’s take a look at the numbers

Documents from MoDOT show that his numbers are on point.

"My preference is to avoid debt when possible," Smith said.

But, the debt paid doesn’t tell the whole story.

The number was higher in 2017 than past years because the agency paid off some of its debt early.

Jay Nixon
stated on August 20, 2015 in comments at the Missouri State Fair
"Almost nine out of every 10 pennies that would be spent" turning a 200-mile stretch of Interstate 70 into a toll road "would be from folks outside Missouri."

This graph of MoDOT’s borrowed funds and annual payments helps visualize the amount of debt MoDOT paid in 2017, compared to debt payments in the past. (Look for the mountain peak.) 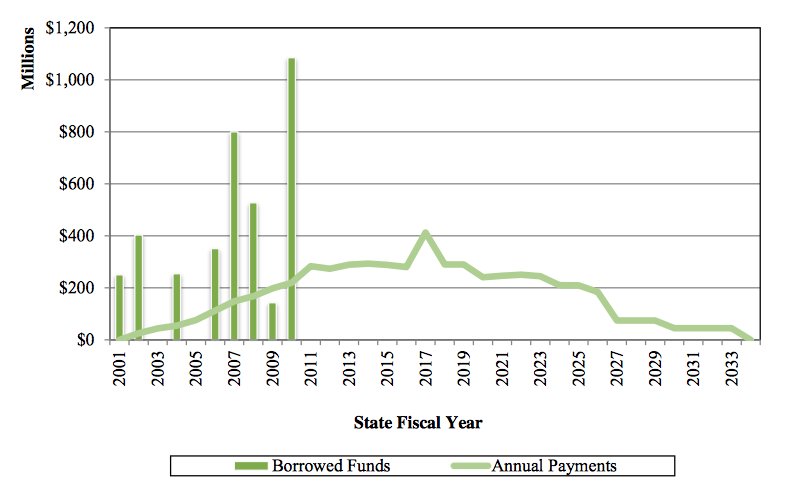 Compared to other state transportation departments, Missouri does not have a lot of debt, said Todd Grosvener, MoDOT assistant financial services director.

"Keeping our road funds stable over the coming years is of the utmost importance," Smith said. "When MoDOT takes on more debt, it has fewer dollars to improve our roads and bridges."

What is the borrowed money used for?

The borrowed funds were and are still being used for "hundreds" of road and bridge projects throughout Missouri, the agency said.

The department borrowed the most money in 2010 when it took on an additional $100 million to replace the Mississippi River Bridge in St. Louis.

In 2010, the department also borrowed $685 million for the Safe and Sound Bridge Improvement Program. This three-and-a-half-year project replaced or rehabilitated more than 800 bridges across the state.

"On behalf of the House of Representatives, I’ll be keeping a close eye on the amount of debt the state takes on to improve and maintain our transportation infrastructure," Smith said.

Smith said, "Our state transportation department already has a heavy debt load and has paid more than $700 million in debt payments in just the last two years."

His numbers match MoDOT’s records. They need clarification, however, because MoDOT paid off a big chunk of debt early, in order to avoid more interest accumulation.

Tracy McCreery
stated on April 8, 2019 a legislative debate:
"Suicide is the second-leading cause of death among 15-19 year olds and 25-34 year olds in Missouri."

Cody Smith
stated on March 6, 2019 a capitol report:
"Our state transportation department already has a heavy debt load and has paid more than $700 million in debt payments in just the last two years."

Clif Smart
stated on February 14, 2019 a tweet:
"Missouri ranks 45th in the nation in per capita state fiscal support for higher education and Missouri State is last among Missouri schools."

Denny Hoskins
stated on February 5, 2019 an interview and multiple media reports:
The sports betting bill would create "$12.5 million to $30.9 million in additional revenue for the state"