Dan Crenshaw
stated on May 6, 2019 in in a television apperance:
Says about 80% to 90% of people seeking asylum do not have a valid claim.

During an appearance on" The View" in early May, U.S. Rep. Dan Crenshaw sparred with host Sunny Hostin as they discussed border security and immigration issues.

"Aren’t you bunching everyone together when you’re talking about undocumented immigrants?" Hostin said to Crenshaw, a Republican from Houston, who was discussing new reports about the number of people apprehended in recent months after crossing the border illegally.

"Many of these people are seeking asylum," she said. "What happened to our country’s promise of give me your tired, your weak and your poor; people who are truly coming here to seek a better life?"

"As it turns out, about 80 to 90 percent of those don’t have a valid asylum claim, once we actually get their documentation," Crenshaw said in reply.

This isn’t the first time PolitiFact has checked a claim about the percentage of asylum claims that are valid — we rated a similar statement from former Attorney General Jeff Sessions false last year.

The truth is, about 20 to 30 percent of asylum requests have been granted annually since 2009, but experts said that does not mean that the remaining 70 to 80 percent of cases are invalid. There are many reasons why an asylum case might otherwise be dismissed or closed.

Before we dive into the numbers, let’s take a look at the two main processes for seeking asylum, as outlined by the U.S. Department of Homeland Security:

Affirmative asylum: a person living in the United States can voluntarily apply for asylum through this process — regardless of their immigration status or how they arrived in the country.

Defensive asylum: a person can apply for asylum through this process to avoid being removed from the country — this process can only be pursued by people who are in removal proceedings.

Crenshaw’s office directed us to a report from the Executive Office for Immigration Review within the Justice Department that looked at asylum cases that originated with a "Credible Fear Claim," which falls under the defensive asylum process.

These claims originate from individuals who were apprehended by Border Patrol officers while attempting to enter the country without authorization and were placed into the expedited removal process.

If a person in these circumstances claims to have a credible fear of persecution or torture if they were to be removed from the country, they meet with an asylum officer who determines whether to refer their case to an immigration judge for a full hearing. Once a case is referred to a judge, a person must submit an application for asylum to the court.

The Justice Department data shows that in fiscal 2018, asylum was granted in 16% of cases that originated from a credible fear claim. About 29% of requests were denied and roughly 15% of cases were closed for administrative or other reasons.

In the remaining 40 percent of cases, individuals who were booked with a credible fear claim did not end up submitting an application for asylum.

While just 16 percent of these cases resulted in asylum being granted, experts said there are many reasons why cases might be closed or requests might be denied, regardless of the merits of a claim.

And just because an individual does not submit an asylum application after a credible fear interview does not mean that they do not have a valid asylum claim, according to Sarah Pierce, a policy analyst at the Migration Policy Institute.

"One of the reasons it is so common to see people who pass the credible fear test and don’t ultimately apply for asylum is that they don’t know that they have to and are confused about the process," Pierce said.

Some asylum seekers assume that their credible fear interview with an asylum officer is their application for asylum, since they are allowed to enter the country while they await their court date, Pierce said. But in actuality, they have to submit a paper application to the court formally requesting asylum.

Looking at the roughly 15% of cases that were closed for unspecified reasons, Pierce said that this group could include individuals who applied for other benefits before an immigration court at the same time as they sought asylum and were granted those other benefits instead.

"When you’re in front of an immigration judge, there’s no limit to what you can ask for," Pierce said. "When I first started practicing, my old boss used to say that I should throw as many wet noodles at the wall as I can to see what sticks."

Similar points were raised by the experts we consulted in our 2018 fact-check of a similar claim from Sessions.

Jennifer Gordon, a law professor at Fordham Law School, said cases can be dismissed for a number of reasons unrelated to the merits of an individual’s claim.

"Many cases are denied for procedural reasons not related to the merit of the claim, or because the applicants are unrepresented or poorly represented and therefore don't have the chance to make their case in an effective way," she told PolitiFact.

James Hathaway, a law professor and director of the Program in Refugee and Asylum Law at the University of Michigan Law School, said it’s also important to count the number of cases that were reversed through the available appeals processes.

The same is true for all asylum cases

Another important caveat to consider is that credible fear claims do not make up the majority of the asylum cases that come before judges in the United States.

Justice Department numbers show that, of all asylum cases closed in 2017 (the latest year with complete data available), about 20% of claims were granted and about 34% were denied. The remaining cases were closed or dismissed for unspecified reasons.

Regardless of which dataset you consult, experts said the same things are true: just because a case is denied does not mean an individual does not have a valid claim (cases can be denied for procedural reasons unrelated to the merits of a claim); asylum cases can be closed or dismissed for many reasons, none of which invalidate an individual’s claim; and just because someone does not apply for asylum after claiming credible fear does not mean their asylum claim is not credible.

Crenshaw said that about 80 to 90 percent of individuals seeking asylum do not have a valid claim.

While data shows that in 2018 about 16% of asylum cases that originate from a credible fear claim were granted and about 20% of all asylum claims were granted, experts said this does not mean that the remaining cases do not have merit.

Crenshaw would have been accurate to say that 16% of people who apply for asylum after making a claim of credible fear have an eligible asylum claim, but the inverse — what Crenshaw said — is inaccurate.

PolitiFact Rating:
False
Says about 80% to 90% of people seeking asylum do not have a valid claim.
Dan Crenshaw
U.S. Representative
https://youtu.be/DNuavL3v-x4?t=70 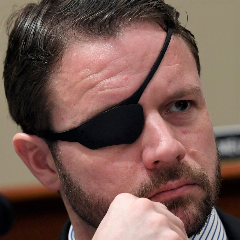 U.S. Citizenship and Immigration Services, Obtaining Asylum in the United States, accessed May 15, 2019

Email interview with Alexei Woltornist, spokesman for the Department of Justice, May 15, 2019