Donald Trump
stated on April 20, 2020 in a daily coronavirus press briefing:
“Hundreds and hundreds of labs are ready, willing, and able.”

At a coronavirus press conference, President Donald Trump said he has a newly assembled list of labs across the country that have the equipment needed to conduct tests for the novel coronavirus.

"We provided each governor with a list of the names, addresses, and phone numbers of the labs where they can find additional testing capacity within their states — many, many labs," Trump told reporters April 20. "We’re providing you with the list. We’ll show it to you now if you need it. We’ll give you the details. But hundreds and hundreds of labs are ready, willing, and able."

Is there a vast, untapped reservoir of labs at the states’ disposal?

Not in the way Trump described it. Many labs exist, but it’s not yet clear they have the capacity and equipment needed to do the job.

Trying to find the labs

We asked the White House for the data to back up Trump’s assertion about hundreds of labs, but the press office declined to comment and did not provide the list Trump referenced. A spokesperson for the Health and Human Services Department said it couldn’t provide a tally of these untapped labs.

The spokesperson there did point to the Food and Drug Administration, which lists 109 labs nationwide that are already offering COVID-19 testing. The FDA also has a separate list of labs that are processing tests under emergency authorization. That adds 18 for a total of 127.

But Trump was describing labs that could conduct tests, not ones that already were.

White House press staff provided an image of a map that included any lab that had equipment for identifying the genetic sequence of a virus. The image quality was too low for counting each dot. But Gov. Larry Hogan of Maryland, and chair of the National Governors Association, said that not only were many on the list already known to officials in his state, they had reached out to them before. 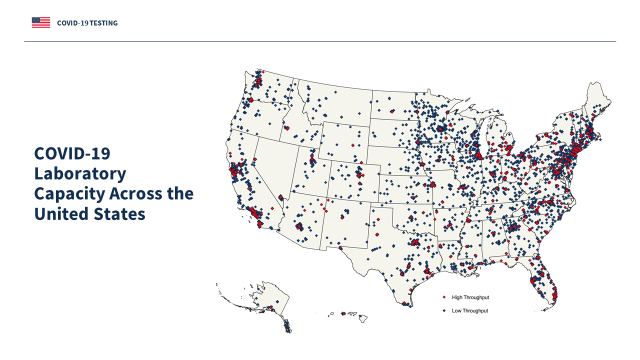 "We’ve been trying for over a month to get access to use labs, like at National Institutes of Health, with no success," Hogan said in an April 21 interview with MSNBC.

What makes a lab ‘ready’?

Even if the labs exist and are willing, it could be challenging to harness the capacity of new facilities identified by the White House in the anti-coronavirus fight.

That’s because all these labs are outfitted for the work they do in non-COVID scenarios, whether in defense, agriculture, basic research, or some other area. Each lab has testing equipment designed to meet those particular needs. Testing experts say it’s unrealistic to expect that each of these labs is able to analyze any specimen it receives.

"Just because the machine exists, you can't will it to work," said Scott Becker,  Association of Public Health Laboratories chief executive officer. "You can’t just show up with a sample, plug it in and expect it to work."

Louise Serio, spokeswoman for the American Clinical Laboratory Association, a trade group that includes the largest commercial labs, echoed the point that much depends on the kind of equipment — or "platform" — the lab has.

Test kits vary. They can contain different materials for a different range of steps in the process, and some are more complete than others. They are not interchangeable.

"For a lab to run a manufacturer’s test kit on a platform, the materials have to match up — the test kit and the platform must be from the same manufacturer," Serio said.

Part of the challenge of using any lab is that testing is a three-step process.

The first two steps are vulnerable to supply shortages — especially of the nasal swabs used to collect patient samples and the chemicals referred to as "reagents" that are needed to study them. States have been competing against each other and Washington for the same limited supply of essential goods, a situation that has become one of the primary constraints on testing in the U.S.

At the April 20 press conference, Vice President Mike Pence said a team at Walter Reed Medical Center was calling the labs on the list to see what they would need in order to help meet testing needs.

That outreach suggests that the government is still learning which labs are able to work with the states.

Trump said he had a list with hundreds and hundreds of labs "ready" and "able" to provide coronavirus testing. The White House declined to provide the list, and the Health and Human Services Department did not provide a tally.

The closest we found was a FDA list of about 130 labs nationwide.

The people who work with testing said that simply possessing the laboratory equipment to process tests is insufficient to pull off the assignment. The vice president described how the government was still in the process of learning which labs could do what.

The labs exist, but the ready and able piece is a work in progress.