After some Florida cities re-opened their beaches during the pandemic, images of Floridians strolling on the sand flooded the internet.

Many of the photos are legitimate, but we can safely say this one is not. The image shows a packed beach with CNN’s logo at the bottom and the words "Jacksonville Beach reopens."

This is bogus. CNN didn’t air the image or claim that it depicts Jacksonville Beach in 2020. It also wasn’t taken recently, or in Florida. 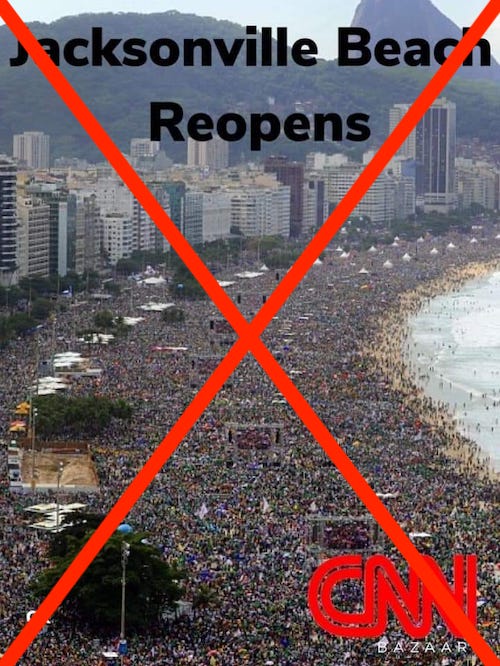 The photo was manipulated to include the CNN logo. A reverse-image search shows that the photo was taken in 2013, not 2020.

Where, you ask? The mountains in the background should be the first red flag. There are no mountains in Florida.

The image also isn’t even from the United States. It was captured on Copacabana beach in Rio de Janeiro, Brazil, on July 28, 2013, for a mass held by Pope Francis during a weeklong visit to the country. About 3 million people attended, according to news reports.

Despite what recent posts on social media might say, the photo has nothing to do with CNN, Florida or beaches currently reopening in the U.S.

We rate it Pants on Fire!