People watch as President Donald Trump delivers the State of the Union address to a joint session of Congress, during a watch party hosted by Miami Young Republicans and Trump Victory Miami on Feb. 4, 2020, in Coral Gables, Fla. (AP)

• Across a broad range of economic metrics, economic performance under Trump continued gains made during the final years under Obama. Charts below show the trendlines.

• Many factors beyond a president’s control also shape the health of the economy.

"The years of economic decay are over," he told the joint session of Congress on Feb. 4, 2020. "The days of our country being used, taken advantage of, and even scorned by other nations are long behind us. Gone, too, are the broken promises, jobless recoveries, tired platitudes and constant excuses for the depletion of American wealth, power and prestige."

Trump added, "If we hadn’t reversed the failed economic policies of the previous administration, the world would not now be witnessing this great economic success."

When we reached out to the Trump campaign, they offered several statistics showing Trump has notched greater gains than Obama did, such as manufacturing job creation, the unemployment rate, and economic growth. We found those statistics, and other specific facts Trump cited during the State of the Union, were accurate, or largely so.

However, unlike Obama, who inherited the Great Recession, Trump inherited an economy that was already getting back on its feet. Overall, we found a continuation of the favorable trend lines Trump inherited from Obama.

We looked at 15 common economic statistics, from unemployment rates to growth in gross domestic product to poverty, foreclosures, and bank failures.

The bottom line: For virtually each of these measurements, we found that the trend lines continued almost seamlessly from the second half of Obama’s presidency into the first three years of Trump’s tenure. Trump’s claim that he turned around a failing economy is wrong.

"I do not think economic gains have been any faster or better under Trump than gains we would have forecast based on the steady improvements we saw in the economy and job market in President Obama’s second term," said Gary Burtless, an economist with the Brookings Institution.

Also, no president has total control over the factors affecting the economy. Broader trends beyond their powers — from international economic conditions to technological changes — shape the course of the economy as well.

"All our decisions together produce the economy," said Aaron Sojourner, a University of Minnesota economist. "It doesn't change when the resident of the White House does."

For unemployment rates and for median weeks of unemployment, the declines under Obama were at least as fast — if not faster — than they have been under Trump. That holds for several of the racial and ethnic groups Trump often cites in speeches, as well as for women. 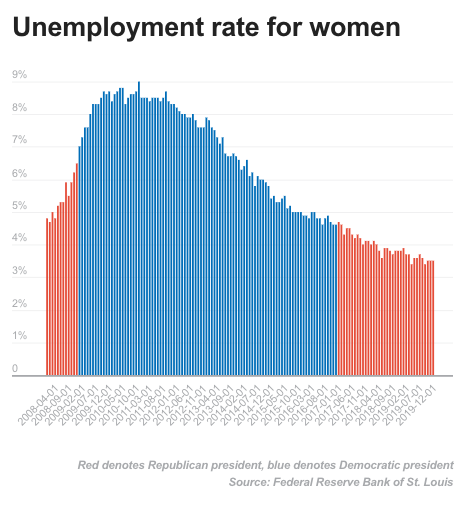 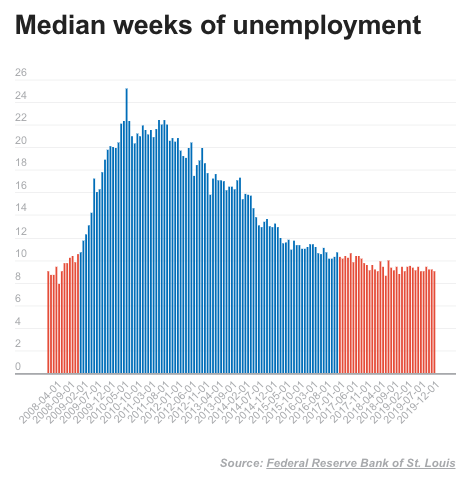 Meanwhile, since the recovery gained speed, the pattern of monthly job gains has been quite similar under both Obama and Trump. That’s also broadly true for manufacturing job gains, a metric that Trump has been especially focused on.

The percentage of Americans either working or looking for work took longer to recover than other statistics, and it still hasn’t returned to pre-recession levels. This statistic did fall for most of Obama’s tenure, but it started to rise in his final year and has continued to rise under Trump. 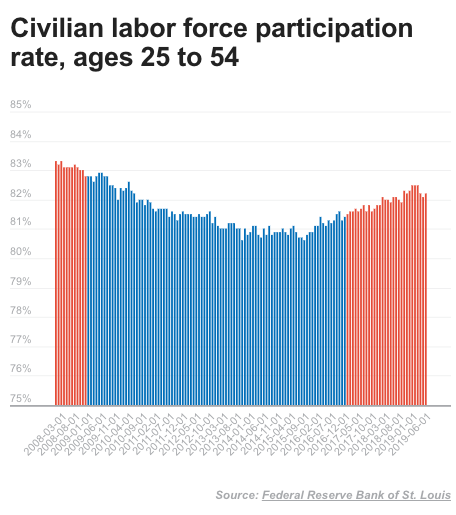 Inflation-adjusted wages fell for much of Obama’s first term, but they began rising again during his second term. Their path under Trump has been along much the same trajectory. 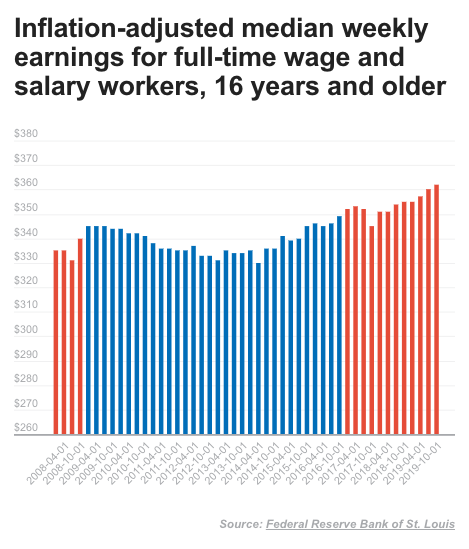 As a candidate, Trump promised 4% economic growth. But he’s never hit that mark in any quarter (Obama did so in four quarters) and he has hit 3% in four quarters, the same number that Obama did during an equivalent period, his final three years in office.

The poverty rate and food stamp use has declined under Trump. Those declines began during Obama’s final years in office. 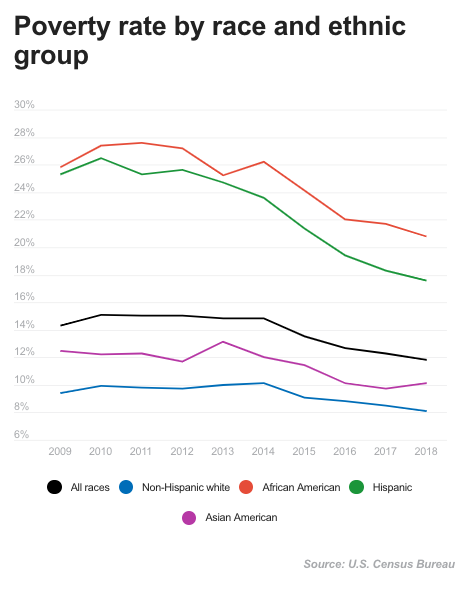 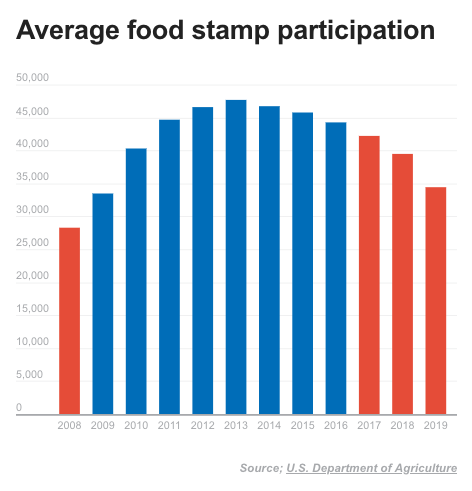 The big declines in foreclosures, bankruptcies and bank failures occurred under Obama, with marginal advances under Trump. 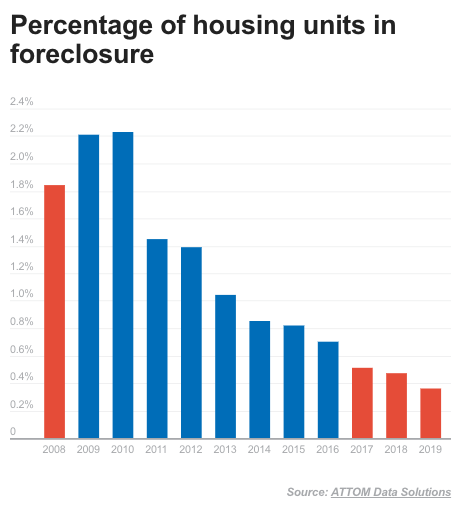 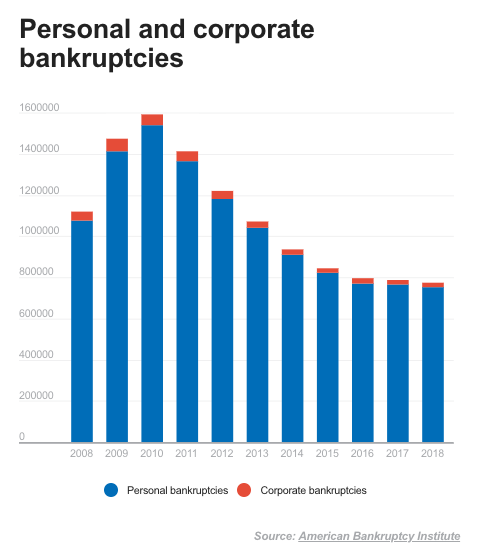 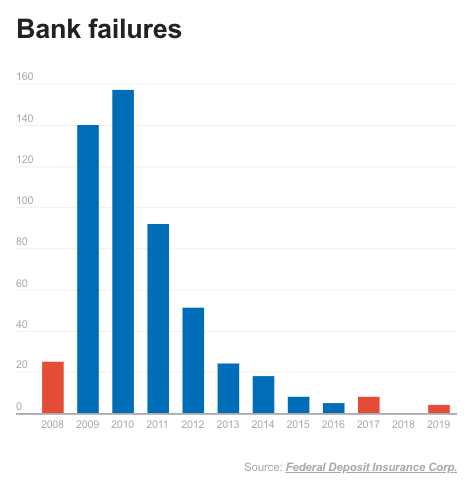 Trump often touts how the stock market has risen on his watch, and it has, to record levels. But a look at the Standard & Poor’s 500, a broad measure of stock market value, shows that the markets have risen at roughly the same rate under both presidents. 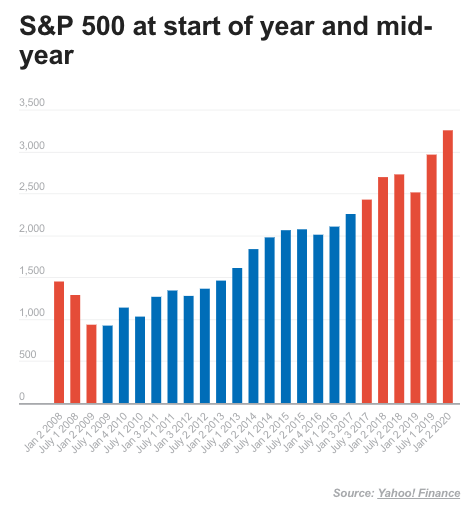 Trump may have his strongest argument on the most intangible of these statistics: consumer confidence.

Regular measurements by Gallup and the University of Michigan show a "breakpoint right after the election" in Trump’s favor, said Jed Kolko, the chief economist for Indeed.com. In Gallup’s measure, for instance, the statistic broke into positive territory with Trump’s election and has stayed there, after being in negative territory for virtually all of Obama’s tenure.

"Multiple economic confidence measures took an immediate and sustained jump after the election, even though it's hard to find similar shifts among the key measures of actual economic performance," Kolko said.

Trump said that "years of economic decay are over" because he "reversed the failed economic policies of the previous administration."

The notion that the economy turned on a dime from bad to good under Trump is not supported by the facts. The performance under Trump has generally continued the pace of improvements that began during the final few years of Obama’s presidency.

Email interview with Aaron Sojourner, economist with the University of Minnesota, Feb. 5, 2020