"There is no way to overstate how ASHAMED I am to be called an ‘American.’ We need every world leader to rise up and demand that someone stops Trump from starting a catastrophic war with Iran. THE TIME FOR VIOLENCE IS NOW! #NoWarWithIran."

It also displays a graphic of Omar with text overlayed that says "No War With Iran."

This is a photoshopped version of a real tweet Omar posted that day.

The original tweet, which includes the same graphic with the words "No War With Iran," was posted at 3:39 p.m. on Jan. 3. In it, Omar wrote:

"There is no way to overstate how dangerous this is. We need every voice to rise up and demand that Congress stop Trump from starting a catastrophic war with Iran. Sign the petition → http://bit.ly/IranPetitionIO #NoWarWithIran." 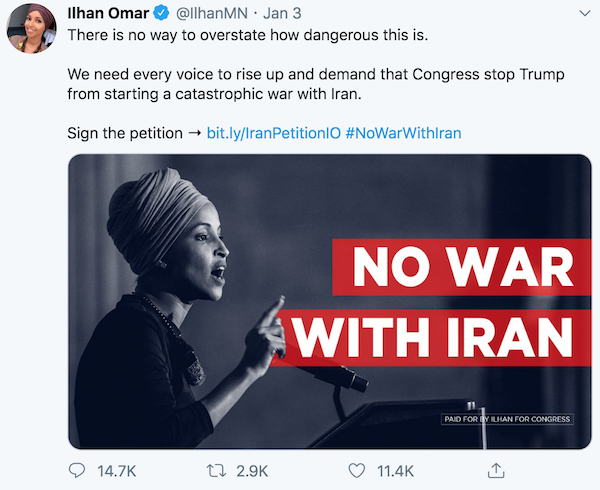 Alex Kaplan, a researcher for the liberal group Media Matters for America reported on Jan. 4 that the account had been suspended. In a Twitter thread, Kaplan wrote that the fake account pretending to be Fox News posted the altered Omar tweet, and has posted several other hoaxes involving other public figures in the past.

While the fake account was reportedly suspended by Twitter shortly after it posted the doctored tweet, screenshots of it continue to be shared on social media.