Rep. Rashida Tlaib, D-Mich., is the first female Palestinian-American member of Congress, and at times, wears the scarf — called a keffiyeh — associated with Palestinian resistance to Israeli control of the West Bank and Gaza Strip.

A viral Facebook post, however, wrongly says the scarf represents terrorism:  "A U.S. Congresswoman wears the symbolic scarf patterned after the Islamic terrorist state," reads the post next to two images of people wearing the keffiyeh. One picture shows Tlaib on the House floor with the scarf around her neck and the other of an armed militant with the scarf over his face. 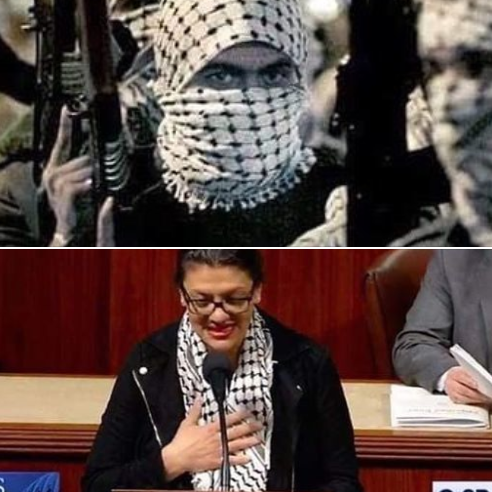 There’s no quibble that the scarf Tlaib wore stands for the Palestinian people. She’s a Palestinian-American and her grandmother lives in the West Bank. Among Palestinians, it’s an object of pride with a history that stretches back thousands of years. Tlaib wore it when she spoke against a House resolution that she said would treat her grandmother as a second-class citizen.

But the tie that the Facebook post makes between the scarf and Islamic State terrorism is unfounded.

Islamic State fighters wore a variety of scarves, but not in a single style that marked their cause. The scarf in the post is associated with Palestinians, not the Islamic State. Though we could not find the origin of the picture of the fighter wearing the scarf, it shows up in posts dating back to 2008, long before the rise of the Islamic State.

This post plays off of a similar claim circulated in December 2019 that accused Tlaib of wearing the scarf of Hamas terrorists. Armed Palestinian groups have worn the keffiyeh. The red and white version is often associated with Hamas, while black and white is tied more to Fatah, which has renounced armed resistance. But in practice, the scarf is worn by many people worldwide, often as a matter of fashion, not politics.

Associated Press, Michigan congresswoman’s scarf is not a symbol of ‘Hamas terrorists’, Dec. 18, 2019

Handmade Palestine, The history of the keffiyeh, accessed Jan. 16, 2019

The Guardian, The keffiyeh: symbol of Palestinian struggle falls victim to fashion, Aug. 9, 2019