Viral image
stated on June 26, 2020 in a Facebook post:
A Denver International Airport mural of people wearing masks was painted in 1994.

Conspiracy theories that claim COVID-19 was planned as part of a world domination scheme by the "elite" have run amok on the internet.

A miscaptioned mural of people wearing masks was recently tacked onto those rumors as more evidence of the plot. But it’s not.

In late June 2020, Facebook users shared a photograph of a mural that showed people of the world wearing masks. The posts claim that the mural was created in 1994 for the Denver International Airport, and the mural proves that the virus was planned.

"The Denver airport mural painted in 1994. Tell me this is not weird, how far do they plan this stuff in advance?" text along the bottom of the image reads.

One user who shared the image wrote: "And I’m the conspiracy "theorist"?! Sorry, but no…" 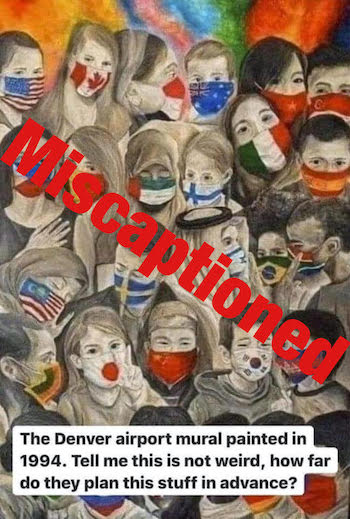 The mural itself is legitimate. But it’s not from 1994, it’s not in the airport, and it didn’t portend the coronavirus pandemic.

There is some confusion over who created the piece, but we can confirm that it has never been displayed in the Denver International Airport and was made in 2020, not 1994.

The earliest online appearance of the piece was when CJ Trinidad, an artist in the Philippines, shared it to his Facebook page in February 2020 with the caption "MASKCOMMUNICATION."

He posted multiple photographs of the artwork, including one of it in progress, and another of him posing with it. His signature appears at the bottom right corner of the piece, and apparel that features the artwork has also been shared on his Facebook account.

But the same piece was credited to someone named Neha Kumari for a coronavirus-themed global art competition hosted by the Indian Council for Cultural Relations. Kumari entered it into the competition under a different title. The image of the mural on the website also shows Trinidad’s signature is cut off.

Authorship aside, the listed submission date of the artwork on the contest website is where people may have gotten the wrong idea about when it was created.

The piece is listed on the site as being submitted on Dec. 28, 1995, but this appears to be an error. The competition’s submissions didn’t open until April 2020. We reached out to the organization for clarification but haven’t heard back.

As for the Denver airport piece of the claim, that’s easy to disprove. Alex Renteria, an airport spokesperson, told PolitiFact that the piece is not from the airport’s collection.

"The only mural painted in 1994 for DEN featuring international children wearing traditional clothing and that also features flags is Leo Tanguma’s ‘Children of the World Dream of Peace,’ but none are wearing masks," Renteria said.

The airport opened to the public in February 1995 and has been a hotbed for conspiracy theories for decades, particularly involving its bold, and sometimes unnerving, public art pieces.

Facebook posts claim that a piece of artwork that shows citizens of the world wearing masks was created in 1994 and is displayed in the Denver International Airport.

While the original artist is still unclear, the image of the piece does not show a mural that was made in 1994 at the airport.