Gwen Moore
stated on June 12, 2020 in a TV interview:
Says police unions have it “written into a contract that (officers) are not going to be accountable” for misconduct.

In a screengrab from video, a New York police officer pushes a protester during a May 29, 2020, march in Brooklyn. (Whitney Hu via AP)

What should happen to police officers who injure or kill someone while making an arrest?

That’s the crux of a debate that played out in Congress and streets across America in the wake of the May 25, 2020, death of George Floyd. He died after a Minneapolis police officer kneeled on his neck for nearly 9 minutes as three other officers declined to step in.

The U.S. House of Representatives passed the George Floyd Justice in Policing Act on June 25, 2020, which would crack down on excessive force and create a national database of officer misconduct. But a similar policing bill failed to pass the U.S. Senate the day before, leaving the future of federal police reform in doubt.

In the leadup to that House vote, U.S. Rep. Gwen Moore, D-Milwaukee, weighed in on police misconduct, criticizing the role of police unions in the accountability process.

"I think it’s outside of the scope of a union to be able to negotiate lack of accountability, to be able to negotiate those kinds of things away." Moore said in a June 12, 2020, appearance on PBS Wisconsin’s "Here & Now." "You can’t train out of a person the propensity to kill, to, if that is, in fact, written into a contract that they are not going to be accountable. And so I think that we have to get rid of that provision in union contracting."

The contract language description caught our eye. Do police unions really have it written into contracts "that they are not going to be accountable"?

That’s a vague and loaded statement, which leaves us with a lot of ground to cover.

When asked for clarification of her remarks, Moore said she backs the ability of unions in general and police unions to negotiate hours and wages. But "the power of collective bargaining should not be used to negotiate contracts or special benefits that shield police officers from accountability for misconduct and thus subvert the fair, impartial administration of justice and rule of law."

Moore’s claim and explanation don’t specify what kind of accountability she’s referring to, so we’ll break this down by the three primary ways law enforcement officers can be held accountable: Internal police discipline, criminal charges and civil lawsuits.

Several of these elements were addressed in the House-passed Justice in Policing Act. The measure would lower the criminal intent standard — from "willful" actions to "knowing" or "reckless" actions — needed to convict an officer in a federal criminal case, and it limited the use of qualified immunity as a defense against liability when an officer is sued in a civil action.

Qualified immunity is a judicial standard under which officers acting in their official capacity are protected from lawsuits unless they have violated a "clearly established" statutory or constitutional right.

But Moore’s claim was that union contracts ban accountability, so we’ll look specifically at how those three elements are affected. And since her claim was broad rather than limited to a single department, we’ll look generally at police union power around the country. 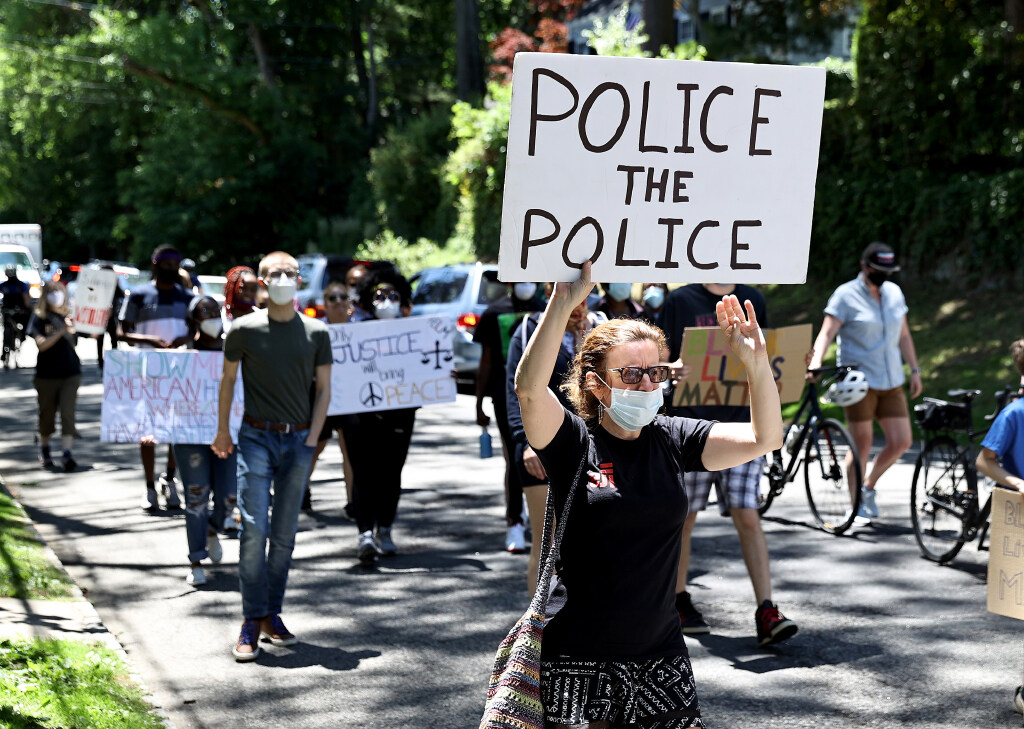 Experts in police accountability say unions wield considerable power in many departments, having negotiated rules and limitations that give police protections the general public doesn’t have and limit some elements of accountability.

"Union contracts can impede internal investigations into police conduct," said Stephen Rushin, an associate law professor at Loyola University Chicago who has reviewed more than 650 police union contracts while studying police labor law. "While this might not be uniformly true across all agencies in the United States, it appears to be the case in many."

Here are some common protections, as detailed by Rushin and Seth Stoughton, associate professor of law at the University of South Carolina. They noted many contracts have language in this vein, but not all.

Interview delays — Some contracts require agencies to wait a set amount of time (typically 24 or 48 hours) before they can interview an officer about an incident.

Information access — Some contracts require an agency to provide the officer with the complaint, witness statements and other documentation prior to being interviewed — access that wouldn’t be allowed to any civilian criminal suspect.

Complaint limitations — Some contracts ban anonymous complaints or require complaints to be made within a certain time period.

Disciplinary history — Some contracts require agencies to destroy disciplinary records after a set amount of time (in some cases less than a year) or mandate prior discipline not be considered in future cases.

Mandela Barnes
stated on September 2, 2022 in News release
"Ron Johnson has voted against funding for law enforcement and recently opposed a plan to recruit and train new officers "

Samuel Walker, emeritus professor of criminology and criminal justice at the University of Nebraska Omaha, noted the arbitration process consistently tends to find a middle ground. In other words, a reduction of department-ordered discipline.

"There’s been a long record of officers who were fired and went to arbitration and got their jobs back," he said.

Union contracts don’t have a direct impact on criminal charges since those decisions are made by prosecutors.

Police officers are "supposed to get the same rights as any private citizen during the criminal investigation," Rushin said.

But this is a protection afforded by case law, not union contracts.

The bigger impact, potentially, is that protections afforded as part of the internal investigation — particularly the delayed interview and access to case information beforehand — can give officers a chance to strategize how they present their version of events, which could affect the outcome of both the internal and criminal cases.

"No civilian would have the right to do that," said David Harris, a professor at the University of Pittsburgh School of Law. "Of course, one can't make the civilian answer questions; civilians could shut up or lawyer up. But the police officer, in the same situation, can't be approached.  They call it a ‘cooling off’ period. One might also call it a ‘get your story straight’ period."

Rushin said it is common for union contracts to make sure officers aren’t held personally liable in the event of a civil judgment against them, and to require the municipality to provide legal representation for the officer.

But that practice, called indemnification, is so widespread it’s not necessarily fair to assume unions are the reason for that, Rushin said.

A 2014 study of civil rights claims against 81 police agencies around the country found governments paid 99.98% of the $730 million plaintiffs received in lawsuits alleging civil rights violations by law enforcement between 2006 and 2011.

Putting it all together

So the evidence is clear that union contracts have an impact on police accountability.

Contract language varies between jurisdictions, but many union contracts give officers rights during investigations that a civilian would not have. They are given time and material to prepare statements, they are shielded from certain types of complaints, they can’t have some past misconduct held against them, and they have the right to appeal discipline leveled against them.

But these impacts are largely limited to internal investigations, which are just one of three main ways police can be held accountable.

The protections can have an impact on how criminal cases proceed, but contracts can’t keep officers from being prosecuted. And civil lawsuits are still filed against officers, though officers are almost never held personally liable. Other civil-related protections such as qualified immunity don’t come from union contracts.

And Moore’s claim wasn’t simply that union contracts limit accountability. She said police are banned from being held accountable.

Walker, the Nebraska professor, called that a "gross exaggeration."

Moore said police unions have it "written into a contract that (officers) are not going to be accountable" for misconduct. The context implies that this is referring in particular to deaths they cause.

This is a sweeping claim that implies by its lack of specificity that officers are shielded from internal, criminal and civil liability by language in their union contract.

Unions simply don’t have that kind of power.

Police unions do offer protections that can make it more difficult to discipline officers, or result in lesser punishments. But officers protected by union contracts are routinely fired, criminally charged and successfully sued in civil court.

There’s a point to be made about union contract influence, but Moore’s attempt to make it was greatly exaggerated.

Email exchange with Seth Stoughton, associate professor of law at the University of South Carolina, June 8, 2020

Email exchange with David Harris, law professor at the University of Pittsburgh School of Law, July 8, 2020

Interview with Samuel Walker, emeritus professor of criminology and criminal justice at the University of Nebraska Omaha, July 7, 2020

Politico, How police reform collapsed in the Senate, June 24, 2020

Tim Michels
stated on September 10, 2022 Public statement:
“You know how many convicted felons Scott Walker let out during his eight years early on parole? Zero. Tony Evers is approaching 1,000 of these that he’s let out early."

Mandela Barnes
stated on September 2, 2022 News release:
Says under his plan to end cash bail "the Waukesha perpetrator wouldn’t have been released "

Ron Johnson
stated on August 7, 2022 News release:
"Last year the IRS audited Americans earning less than $25,000 a year at five times the rate of other groups."

Tony Evers
stated on July 24, 2022 TV interview:
"We are number one in the country as far as our spending (COVID-19 relief) money on businesses as it relates to the percentage of federal funds that we receive."

Rebecca Kleefisch
stated on July 24, 2022 Twitter:
"There is absolutely no reason why Wisconsin should be facing a worker shortage to the level we are when there are 123,000 more able-bodied childless adults on BadgerCare since the pandemic."

Democratic Party of Wisconsin
stated on May 2, 2022 News release:
Republican politicians are pushing a plan "that could raise taxes on almost one in three Wisconsinites and sunset Social Security and Medicare in five years."

Tim Michels
stated on May 26, 2022 Public statement:
On disbanding the Wisconsin Elections Commission

Ron Johnson
stated on May 11, 2022 News release:
In the immediate wake of a fire and vandalism at the Madison headquarters of an anti-abortion group, Democrats had not condemned “activists who are engaging in this repugnant illegal activity.”

Kelda Helen Roys
stated on May 8, 2022 TV interview:
Because of U.S. Senate rules, Democrats need "more than a majority ... to codify Roe vs. Wade."