Facebook posts
stated on May 31, 2020 in a Facebook post:
Says President Trump tweeted that he spoke with George Floyd’s family and said they were “honored” to hear from him.

Facebook users are circulating an image of a fake tweet attributed to President Donald Trump that states he spoke with George Floyd’s family and they were "honored" to hear from him.

The faux tweet is rife with grammatical errors. It reads:

"I spoke with George Floyd’s family. There voices told me they were honored to hear from me. I told them I didn’t want to see another black man die by a knee to the neck. It looked to painful. There’s better ways to die. No way is good, but that was very bad." 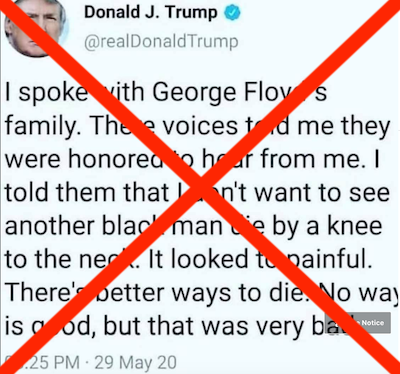 This is not a legitimate tweet by the president.

It doesn’t appear anywhere on Trump’s Twitter timeline on May 29, the date the screenshot shows it was supposedly posted.

Viral image
stated on June 3, 2020 in a Facebook post
“She’s just casually carrying a body with 1 hand..? Sure.. More evidence of coronavirus being a complete hoax with props & street theater.”

ProPublica, a nonprofit journalism organization, maintains a database of tweets deleted by politicians called Politwoops. The alleged post is not captured in the database, and we found no evidence that shows the tweet ever existed on the platform.

Trump did say on May 29 that he spoke with members of Floyd’s family. He described them as "terrific people" and said he reached out to them to express his sorrow.

As for the fictitious tweet, we rate it Pants on Fire!

Reuters, Fact check: Trump did not tweet that George Floyd’s family were honored to hear from him, June 1, 2020

Bloggers
stated on July 1, 2020 a story:
Says John Elway told NFL players “Kneel on my field and you’re fired on the spot.”

Viral image
stated on June 26, 2020 a Facebook post:
A Denver International Airport mural of people wearing masks was painted in 1994.