President Donald Trump blamed the anti-fascist movement known as antifa for violence at some of the early protests against police brutality, without offering evidence. Antifa is an umbrella term for a movement of far-left, anti-fascists, and not a unified organization.

Did he really? The post says, "Yes folks. He really said that." 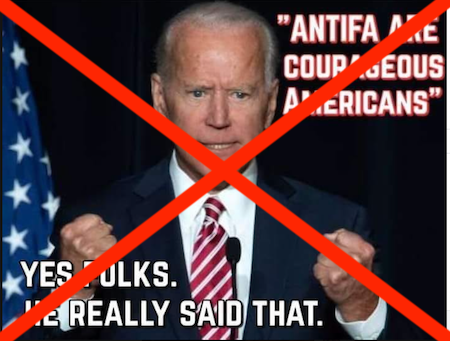 We searched for the quote in Biden’s interviews, campaign videos and speeches. The faux-quote appears to be linked to something Biden said in an April 2019 campaign video when he formally announced his candidacy.

Biden recapped the events, saying (around 1 minute in) that protesters were "met by a courageous group of Americans." An image of a poster board that reads, "VA students act against white supremacy," is displayed as Biden talks.

In context, Biden was broadly referring to people who opposed white nationalist demonstrators during those events. While anti-fascist counter-protesters fall under this designation, so do many others. Some of the counter-protesters were students, ministers from local churches, ordinary residents of Charlottesville, and racial justice advocates.

Groups of antifa counter-protesters violently clashed with white nationalists at the Charlottesville rallies. Some witnesses said they incited the violence, which included people swinging sticks and clubs, throwing projectiles, spraying chemicals and getting into brawls. Each side blames the other for escalating the situation.

Biden didn’t say that. He spoke broadly about "courageous" people who stood up to white nationalists during the 2017 Charlottesville rallies, and didn’t specifically call out, mention or praise antifa.

Los Angeles Times, Who was responsible for the violence in Charlottesville? Here’s what witnesses say, Aug. 15, 2017

New York Times, Who Were the Counterprotesters in Charlottesville?, Aug. 14, 2017