Donald Trump
stated on March 7, 2020 in a tweet:
Video shows Joe Biden saying “we can only re-elect Donald Trump.”

For the first time, Twitter applied its new policy and labeled the video as "manipulated media," though it could still be viewed on Twitter without the warning label.

On March 7, Dan Scavino, an assistant to Trump and the White House’s director of social media, tweeted a 13-second video of Biden speaking at a campaign event in Missouri:

"Sleepy Joe in St. Louis, Missouri today: ‘We can only re-elect @realDonaldTrump.’"

The video tweet was viewed more than 6 million times and drew retweets from Trump.

"I agree with Joe!" tweeted Trump. He also retweeted the video clip posted by conservative activist Charlie Kirk and a later tweet by Scavino.

We contacted the White House and did not get a response. Scavino tweeted March 9 that "the video was NOT manipulated."

What Biden said in Kansas City

Biden was speaking in Kansas City (not St. Louis, as Scavino said) on March 7 when he made the speech in question.

Biden clearly stumbled over his words as he spoke during part of the speech. But it’s clear that he wasn’t calling for Trump to get re-elected. (Start at the 13:20 mark for a full minute listen.) Biden’s point was to call on Democrats to unite as a party and avoid attacks on each other to aim to defeat Trump.

Speaking in St. Louis earlier in the day, Biden made the same point without stumbling over his words:

"If you want a nominee who will bring the party together, who will run a positive, progressive vision for the future — not turn this primary into a campaign of negative attacks because that will only re-elect Donald Trump if we go that route."

The "manipulated media" warning beneath the tweet was not showing up in tweet detail, but it is visible in the timeline. Twitter said it was working on a fix. 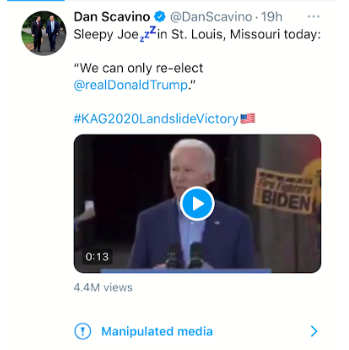 On Facebook, Scavino’s video was labeled "partly false" after it was reviewed by fact-checkers. PolitiFact is also part of the fact-checking partnership with Facebook.

"Fact-checkers rated this video as partly false, so we are reducing its distribution and showing warning labels with more context for people who see it, try to share it, or already have," Facebook said in a statement. "As we announced last year, the same applies if a politician shares the video, if it was otherwise fact-checked when shared by others on Facebook."

A White House video showed 13 seconds of Biden speaking at a campaign event when he said "we can only re-elect Donald Trump."

Biden did make that statement as he stumbled over his words. But the video snippet omitted what Biden said immediately before and after, which removes his meaning.

Biden’s overall point was to call for Democratic Party unity and to run a positive campaign, rather than intra-party attacks. The video stripped that out.

The video employs deceptive editing via omission. We rate it Mostly False.