Facebook recently launched its 2020 voter information initiative, which aims to connect users to information about voting where they live to help bolster registration and turnout.

But one post claims the social media platform dramatically overshot the number of registered voters in the state of Arizona.

While the claim gets the population of Arizona right, it’s wrong about the number of registered voters Facebook is reporting there. Here’s why.

Facebook’s tally of registered voters, which users will sometimes see pinned to the top of their newsfeeds, displays the number of people in the U.S. who’ve used Facebook’s interface to share that they have registered to vote. The figure is not representative only of those in Arizona — or any other single state, for that matter.

A spokesperson for Facebook confirmed to PolitiFact that it hasn't shared the number of registered voters by region or state, and said the post is likely referring to the total number of users around the U.S. who’ve shared that they registered, which updates in real time. A tally showing that figure appears above the words "People who shared they registered to vote in the United States."

The user’s state is listed above that tally, but the number isn’t specific to that state: 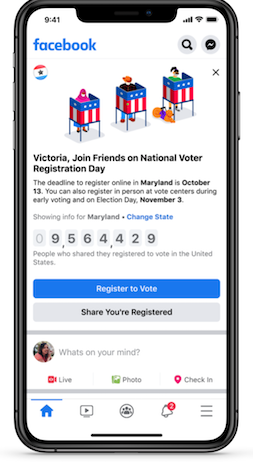 According to the Arizona Secretary of State’s website, as of August 2020 there were 3,989,214 registered voters, with 1,389,960 registered as Republican and 1,293,074 registered as Democrat. The remaining are registered under "other" or Liberatarian.

As of July 2019, the population of Arizona stood just over 7.2 million, with 22.5%, or about 1.6 million, being under the age of 18 and therefore not eligible to vote, according to Census data.

This post gets Arizona’s population right, but the rest of the claim is wrong.

The Verge, Facebook will pin voting registration links to the top of the News Feed for all US voters, July 2, 2020