John Cornyn
stated on October 14, 2020 in a tweet:
Says Democratic senators were missing “masks” as they huddled close together at the Judiciary Committee hearing for Amy Coney Barrett.

The original tweet was posted about nine hours before Cornyn retweeted it. 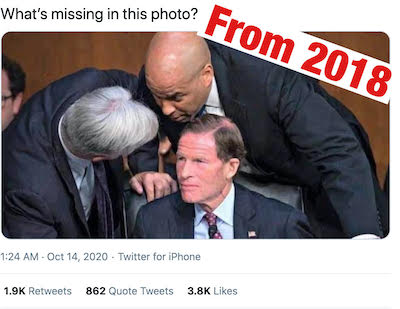 Senate leaders have encouraged lawmakers to wear masks this year to combat the spread of COVID-19. But Cornyn’s suggestion that the senators’ masks are missing is misleading. The photo in the tweets wasn’t taken during the pandemic.

A reverse-image search shows that the photo is authentic, but it was taken in September 2018 by Getty photographer Mark Wilson during Judge Brett Kavanaugh’s confirmation hearings.

The original tweet was sent by Mary Ann Mendoza, a conservative activist who was abruptly pulled from speaking at the Republican National Convention after it was reported that she had shared an anti-Semitic conspiracy theory on social media.

Cornyn deleted his tweet shortly after a journalist pointed out that the photo was not current.