Cars set ablaze amid violent protests burn at the Car Source in Kenosha on Aug. 24, 2020. (Photo by KAMIL KRZACZYNSKI / AFP)

One of the trademark images from Kenosha in the violent unrest that followed the police shooting of Jacob Blake shows dozens of vehicles consumed by flames in a used car lot.

It has spurred a viral — and plainly wrong — claim about the lot’s owner.

An image that began circulating on Sept. 11, 2020, shows a supposed screenshot from the Fox Business Network website reading, "Kenosha car dealer kills himself after his insurance won’t cover a cent of the 2.5 million dollars of damages caused by the riots." 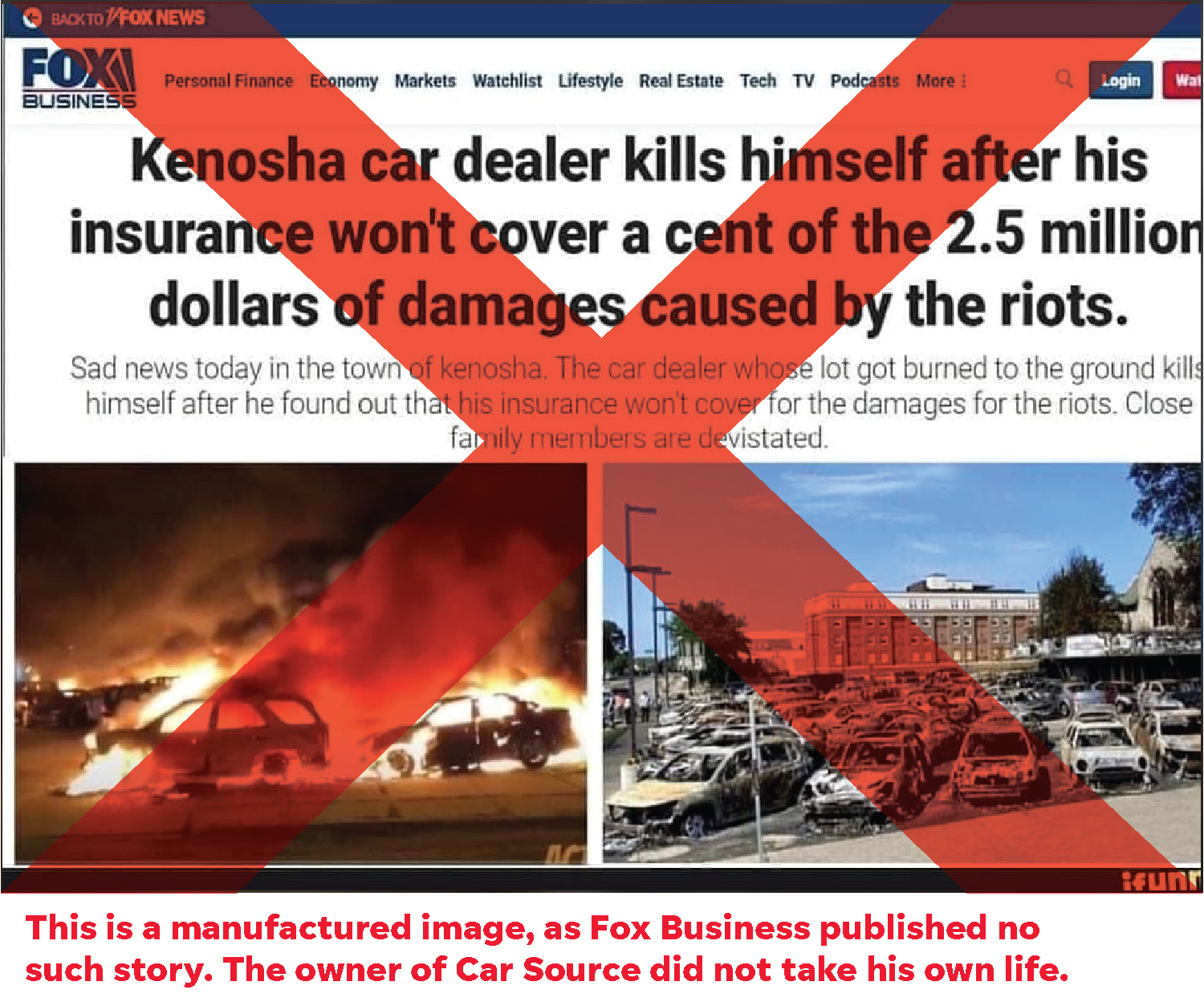 A subhead beneath that says, "Sad news today in the town of Kenosha. The car dealer whose lot got burned to the ground kills himself after he found out that his insurance won’t cover for the damages for the riots. Close family members are (sic) devistated."

This sloppily-worded claim is not true.

The car lot involved — Car Source — is co-owned by Anmol Khindri, his father and his brother, Anmol Khindri told WKOW for a Sept. 2 story. They bought the lot in 2013.

After Blake, 29, was shot in the back seven times by a Kenosha police officer on Aug. 23, the lot was targeted on consecutive nights as protests devolved into looting and violence.

Khindri estimated the damage at $2.5 million. A gofundme page launched to help the lot’s 20-plus employees said 137 cars were destroyed, in addition to the damage to the building.

Here is another look at 'Car Source' dealership in #Kenosha pic.twitter.com/sYJ2o8jYeB

"They don't cover the riots. This is domestic terrorism, (they) don't cover it," he told the TV station. "I'm screwed. I'm bankrupt."

There are numerous reasons to doubt the image in the viral post, but we’ll start with what we learned directly from the Khindri family, and the most basic fact:

No one died by suicide.

PolitiFact Wisconsin spoke to Khindri’s mother, Suman Khindri, and his father, Anil Khindri, hours after the image was posted online, and both confirmed the report of a suicide was incorrect. Anmol Khindri did not immediately respond to phone calls seeking comment.

But the sloppily-assembled image also gave a discerning viewer many reasons to doubt its veracity. Among the tells:

A viral image says the owner of a Kenosha car dealership destroyed by arsonists killed himself because insurance wouldn’t cover the losses.

The owner of Car Source has said insurance denied the claim since it was due to "domestic terrorism."

But the thrust of the claim is not about insurance, it’s that a man lost his life. And that element is manufactured and completely wrong.

Anmol Khindri has not taken his own life. The headline shown here was manipulated — no such story was published by Fox Business Network.