Facebook posts
stated on April 6, 2021 in a Facebook post:
Schools stopped teaching children cursive so they wouldn’t be able to read the U.S. Constitution and other historical documents.

Many schools don’t teach students cursive writing anymore, for the same reason they don’t teach them how to use a manual typewriter or a slide rule. It’s just not a very relevant skill.

But some on social media point to a more sinister reason for the disappearance of cursive instruction: a plot to ensure children won’t be able to read the U.S. Constitution and thus won’t understand their rights as citizens.

"Our Constitution, our Bill of Rights, is written in cursive and they no longer want generations from here on out to know how to read it," says one woman in a viral Facebook video, as ominous music plays in the background.

The problem with that theory: You don’t need to know cursive to read the text of the U.S. Constitution.

While the U.S. Constitution, Declaration of Independence and many other historical documents were first handwritten in cursive on parchment with quills and ink — the originals are in the National Archives — copies in typeset, printed form have been available almost ever since, and they have all been archived and digitized for ready access.

The Declaration of Independence was set in movable type immediately after its adoption — by order of the Continental Congress — and was distributed through the colonies. The text of the Constitution, too, was typeset and printed in the Pennsylvania Packet on Sept. 19, 1787, two day after it was signed.

Meanwhile, students who attended school when cursive instruction was in the regular rotation didn’t learn about the Constitution and other founding documents by looking at the original manuscript. They learned it from textbooks.

Even for students who learn cursive, the penmanship of the founding documents can be difficult to understand. 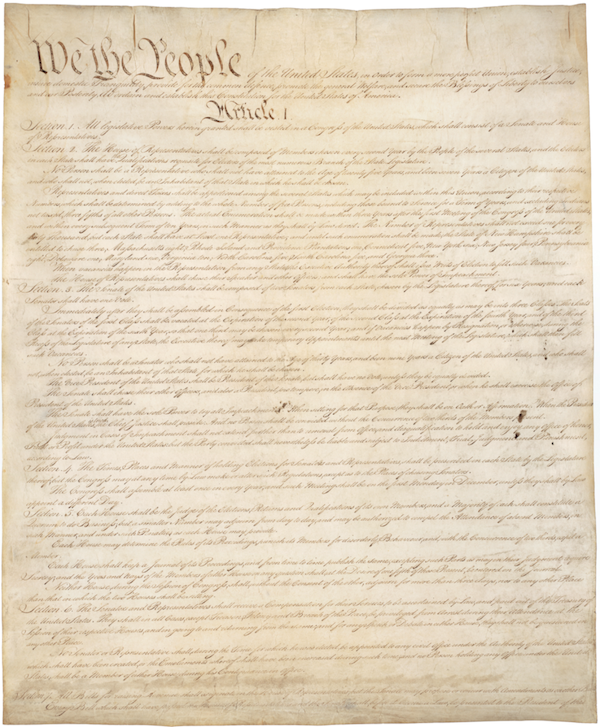 Page 1, reproduction scan of the U.S. Constitution. Library of Congress 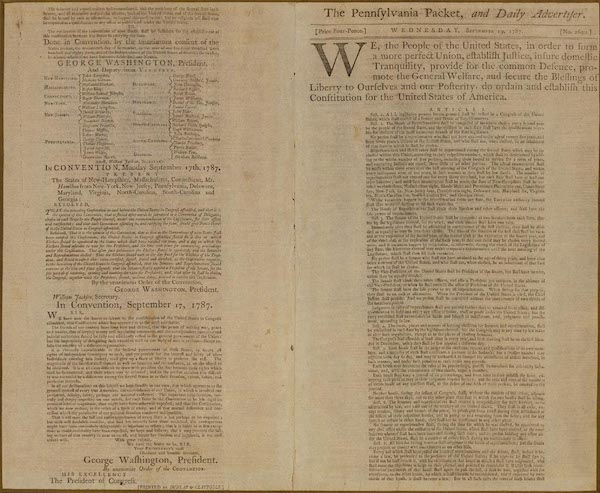 The U.S. Constitution in typeset format. Printed in the Pennsylvania Packet on Sept. 19, 1787. Library of Congress
Cursive instruction had a good run, but began fading quickly after 2010, when the Common Core standards, which most states use, dropped the requirement in public schools on the grounds that it wasn’t a relevant skill. As of 2019, however, nearly two dozen states have reintroduced it.

Proponents of teaching cursive argue that it has positive effects on children’s brains, as it teaches them language and sequencing and improves their motor skills.

A video on Facebook claims that schools stopped teaching cursive to make sure children couldn’t read the U.S. Constitution, and other important historical documents.

This is bogus. Even if that were the intention, it would not be a very good plan. The founding documents have been available in typeset, printed form almost since they were first written, and have been archived and digitized many times over.

We rate the claim Pants on Fire!

Archives.gov, The Constitution of the United States: A Transcription, Accessed April 19, 2021

Library of Congress, Constitution of the United States, Sept. 17, 1787