Missouri House Democratic Caucus
stated on March 22, 2021 in a tweet:
"An average of nearly 5,000 Missourians were contracting COVID every day in November."

Democrats in Missouri’s House of Representatives took aim at Gov. Mike Parson and his handling of the coronavirus pandemic in a March 22 tweet.

After Parson touted the fact that he had no statewide mandates in response to the coronavirus pandemic, the Missouri House Democratic Caucus responded on March 22 by saying, "Oddly, he chose not to gloat when an average of nearly 5,000 Missourians were contracting COVID every day in November. And we didn't have statewide mandates then either."

Parson’s strategy throughout the pandemic was to enact as few statewide mandates as possible. This frustrated Democrats who believe this strategy allowed the coronavirus to spread out of control, specifically in the worst months of the pandemic.

November was Missouri’s peak in cases throughout pandemic, but was the average really close to 5,000 every day in November? We took a look.

Data from the DHSS

A representative of the Democratic Caucus told us they used data from the Missouri Department of Health and Senior Services. He also said that they used data from Nov. 7 to Dec. 5, but since the text of the tweet said "in November," we looked at Nov. 1 to 30.

We looked at the data in a few ways. We began with data from Nov. 1 to 30, because that’s the period the tweet actually described.

First, we looked at the seven-day rolling average of new daily cases. In other words, we took the number of new cases for each day, added that to the sum of new cases for the preceding six days and divided that number by seven. Looking at the rolling average helps smooth out fluctuations due to uneven reporting from day to day, such as weekends and holidays.

We also took the daily average for the entire month — by adding up all the new cases from each day and dividing that by 30. That came out to 3,879 new cases a day.

Data from the CDC

There are multiple agencies tracking this data, and sometimes the numbers can vary a little bit due to minor differences in reporting methods. So, we also took a look at data from the U.S. Centers For Disease Control and Prevention. There, we found higher numbers, but still not quite what Democrats were claiming.

The daily average for the month was 4,251 new cases. 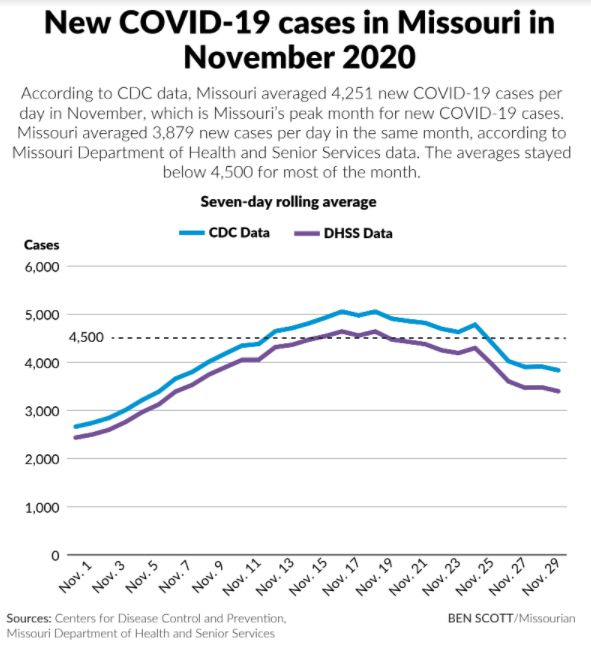 Although the text of the tweet said November, we figured we’d also check data from Nov. 7 to Dec. 5, which is what the Democratic caucus said it used. Here, we used DHSS data again, and the results were similar.

The Missouri House Democratic Caucus said that "an average of nearly 5,000 Missourians were contracting COVID every day in November."

This is an exaggeration. November was Missouri’s peak in COVID-19 cases, and daily new-case numbers were in the thousands, but to say that the average was near 5,000 every day is inaccurate.

Missouri House Democratic Caucus
stated on March 22, 2021 a tweet:
"An average of nearly 5,000 Missourians were contracting COVID every day in November."

Eric Greitens
stated on March 2, 2021 an interview on 97.1 KTFK:
By ending the Keystone XL Pipeline project, President Joe Biden “imperiled one of Donald Trump's most significant achievements, which was that we had achieved American energy independence.”

Roy Blunt
stated on February 25, 2021 a tweet:
Says his amendment on a budget bill “would have helped get kids back in school after teachers were vaccinated. Every single Senate Democrat voted against it.”

Josh Hawley
stated on January 4, 2021 a tweet:
Says activists threatened his family and “screamed threats, vandalized, and tried to pound open our door.”

Uniting Missouri PAC
stated on September 2, 2020 a campaign ad:
Says Nicole Galloway's campaign “is being bankrolled by the same extremists who want to defund our police."