Facebook posts
stated on August 16, 2021 in social media posts:
The U.S. is “now importing 800,000 barrels of oil from Russia,” but that could have been prevented if the Keystone XL pipeline hadn’t been cancelled.

A Lukoil oil platform in the Caspian Sea, about about 800 miles south of Moscow. (AP)

• The amount of oil being imported today from Russia has reached a record level, and it does roughly equal the transport capacity of the now-cancelled Keystone XL pipeline.

• However, the pipeline would first need to be built, meaning it couldn’t solve today’s demand needs, and it’s hardly assured that the Canadian production that would feed the pipeline would have risen by 800,000 barrels a day beyond today’s production, or that this entire amount would be sold to the U.S.

On social media, Americans are frustrated with rising gasoline prices. Online critics of President Joe Biden have blamed him personally for the price spike, though experts have told us that the price increase has more to do with higher demand during the economic recovery following the business shutdowns of the coronavirus pandemic.

One recent Facebook post merged this line of argument with another criticism: The Biden was coddling Russia with his energy policies.

The post said, "The imbecile in chief is now importing 800,000 barrels of oil from Russia. Guess how much oil the (Keystone XL pipeline) would have carried from Canada? I will give you a hint. It rhymes with 800,000 barrels."

After years of acrimony, Biden used the power of the executive branch to cancel the Keystone XL pipeline, which would have transported crude oil from the Canadian province of Alberta to Steele City, Neb., where it would connect with another leg stretching to Gulf Coast refineries. From there, refined petroleum products could be sold either in the U.S. or to foreign buyers. 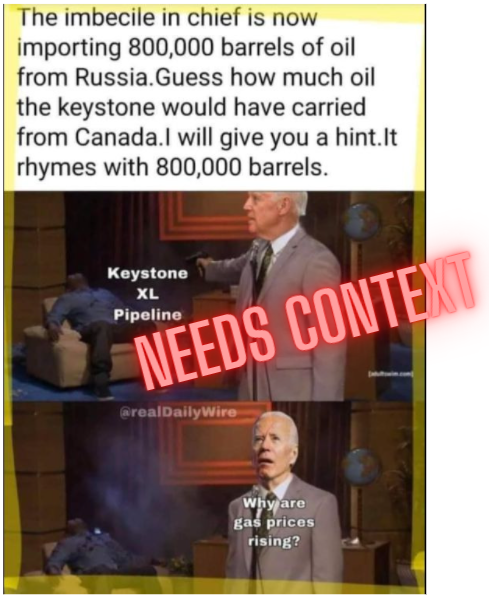 The most recent data from the U.S. Energy Information Administration shows that in May, the U.S. imported 844,000 barrels per day of crude oil and petroleum products from Russia. That’s almost 10% of all the U.S. imports for that month.

Historically speaking, this is a large amount, setting a new monthly record for Russian oil imports.

A large reason for the spike in Russian imports is believed to be sanctions the U.S. placed on Venezuela in 2019. Much of what the United States has been importing from Russia is a gooey, semi-refined fuel that the Russians call "mazut" that is similar to the Venezuelan product. Some U.S. plants have specialized systems to refine these fuels, and some oil companies have turned to Russia to keep those factories going in the absence of Venezuelan imports.

As for the cancelled Keystone XL pipeline, it would have been able to carry up to 830,000 barrels of oil every day.

Zach Nunn
stated on May 9, 2022 in a campaign ad
“Zack Nunn saved over 2,000 Americans abandoned in Afghanistan by leading private rescue missions.”

Could Keystone XL have saved the U.S. from importing from Russia?

Experts said that any impact from the Keystone XL pipeline would have been years down the road. Even if all legal obstacles were to disappear, the project would have involved the construction of 1,204 miles of new pipeline in Canada and the United States.

"There is no justification for comparing oil import levels from Russia to the transportation capacity of the proposed Keystone XL pipeline, or to suggest that these imports from Russia would have been entirely displaced by crude transported through Keystone XL," said Jason Bordoff, founding director of the Center on Global Energy Policy at Columbia University.

In addition, "the Keystone XL pipeline wouldn’t have produced oil — it would have transported oil," said Severin Borenstein, director of the Energy Institute at the University of California-Berkeley's Haas School of Business.

In other words, just because Keystone XL might have been able to carry 800,000-plus barrels a day "does not mean that production in Canada would have been 800,000 barrels a day higher than today," Bordoff said. The pipeline might have simply displaced other types of transportation, such as tanker trucks, that are currently used to carry oil away from Alberta.

There’s no guarantee that oil producers in Alberta would have sold that theoretical excess production to the U.S.

Finally, the United States produces much of its own oil and could produce more if needed.

A Facebook post said the U.S. is "now importing 800,000 barrels of oil from Russia," but that this could have been prevented if the Keystone XL pipeline hadn’t been cancelled.

The amount of oil being imported today from Russia has reached a record level of more than 800,000 barrels a day. That does roughly equal the transport capacity of the Keystone XL pipeline — but it’s not as simple as substituting one source for the other.

The pipeline would have required years of construction and likely more legal challenges, so it couldn’t have solved today’s demand needs. Even in the future, there would be no certainty that the pipeline could produce a net increase of 800,000 barrels a day, rather than just transporting oil from Canada that is currently being transported some other way. Nor would producers be obligated to sell that entire amount to the U.S.

Email interview with Severin Borenstein, director of the Energy Institute at the University of California-Berkeley's Haas School of Business, Aug. 20, 2021

Email interview with Mark Finley, fellow in energy and global oil at the Center for Energy Studies at Rice University's Baker Institute for Public Policy, Aug. 20, 2021