Facebook posts
stated on January 20, 2021 in an image:
"By revoking the Keystone pipeline permit, Biden is destroying 11,000 jobs.”

President Joe Biden signs his first executive order in the Oval Office of the White House on Jan. 20, 2021, in Washington. (AP)

President Joe Biden spent his first day in the White House signing a spate of executive orders aimed at undoing the policies of the Trump administration. One of them sparked outrage on Facebook over its effect on American jobs.

On Jan. 20, Biden signed an order that revoked the permit for the construction of the Keystone XL pipeline. In a Facebook post published the same day, one user said the move would cost thousands of jobs.

"By revoking the Keystone pipeline permit, Biden is destroying 11,000 jobs and roughly $2 billion in wages," the post says. "Democrats couldn’t even get through Day 1 without killing jobs for middle class Americans."

We’ve seen several similar posts offer other figures for how many jobs were lost as a result of Biden’s executive order, ranging from 12,000 to 83,000. So we wanted to take a closer look. 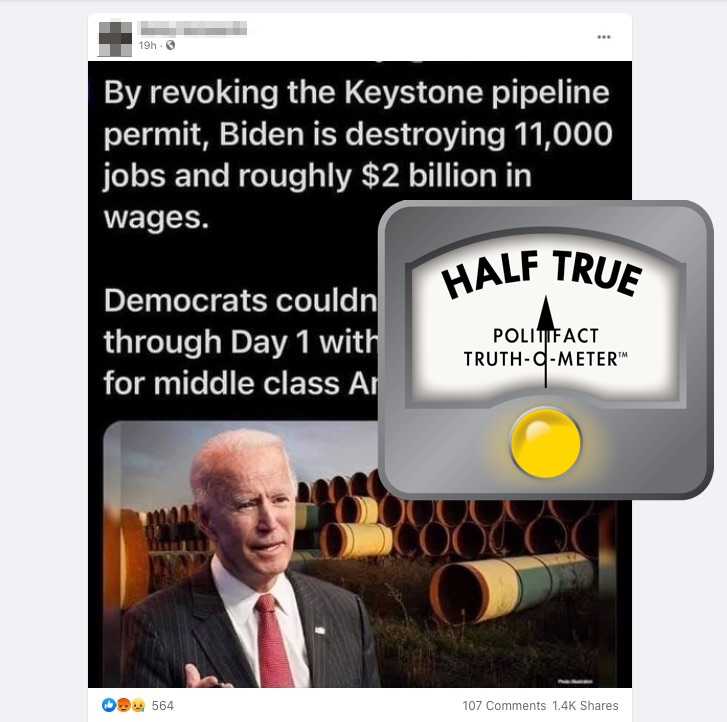 TC Energy Corp., the Canadian company that owns the Keystone XL pipeline with the Alberta government, has said more than 1,000 people are out of work because of Biden’s executive order. The 11,000 and $2 billion figures cited in the Facebook post are estimates published by the company, but most of the jobs would be temporary.

We reached out to the user who published the post for their evidence, but we didn’t hear back.

What Biden’s order does

The Keystone XL pipeline is an international project years in the making. Without support from the U.S. government, it’s effectively halted.

The 875-mile pipeline would carry a heavy crude oil mixture from Western Canada to Steele City, Neb., where it would connect with another leg stretching to Gulf Coast refineries.

Biden’s order revokes the permit that was granted March 29, 2019, by then-President Donald Trump on the grounds that it is harmful to the environment.

While an 11-volume State Department report on the Keystone XL pipeline found in 2014 that it would not significantly contribute to carbon pollution, critics say the project threatens Alberta’s rivers and forests. And the project has become a symbol for the political debate over fossil fuels.

The Obama-era State Department had denied TC Energy’s request for a permit in 2015. Trump revived hopes for the project once he took office, ultimately approving it with an executive order. Construction began in April 2020, but that same month, a federal court said that the project had to go through a full endangered species review. TC Energy appealed the ruling, but the Supreme Court upheld it in July.

Before Biden signed his executive order, only a 1.2-mile section of the pipeline had been completed in Montana near the U.S.-Canada border.

‘Thousands’ of lost jobs, but most are temporary

Over the past several years, we’ve fact-checked many claims that the Keystone XL pipeline would create thousands of American jobs. Several of them lack context about the duration and nature of these positions, and this Facebook post is similar.

In a Jan. 20 statement, TC Energy said Biden’s order "would directly lead to the layoff of thousands of union workers." It did not specify exactly how many jobs would be lost.

President Richard Prior told the Associated Press that the layoffs would number more than 1,000. We reached out to TC Energy for more information, but we haven’t heard back.

In October, TC Energy awarded contracts to six American union contractors to build the Keystone XL pipeline in three states in 2021. Those contractors were "responsible for hiring 7,000 union workers."

That’s close to what the State Department found in its 2014 report.

In the report, the agency wrote that 10,400 estimated positions would be for seasonal construction work lasting four to eight-month periods. Since the State Department defines "job" as "one position that is filled for 1 year," that would equate to approximately 3,900 jobs over a two-year period.

In short: Most of the estimated jobs were temporary.

The State Department forecasted that no more than 50 jobs, some of which could be located in Canada, would be required to maintain the pipeline. Thirty-five of them would be permanent, while 15 would be temporary contractors.

That number is an estimate, and the claim lacks context about the longevity of Keystone jobs.

TC Energy said more than 1,000 people are out of work because of Biden’s executive order. In October, the company said it expected to employ more than 11,000 Americans in 2021 and generate more than $1.6 billion in gross wages.

But both TC Energy and the State Department have said the majority of those jobs would be temporary. A 2014 report found that the company would need only 50 employees to maintain the Keystone XL pipeline once it’s finished, 35 of them permanent.

Temporary jobs are still jobs. But this post could leave the wrong impression without full context. We rate it Half True.

JoeBiden.com, THE BIDEN PLAN TO BUILD A MODERN, SUSTAINABLE INFRASTRUCTURE AND AN EQUITABLE CLEAN ENERGY FUTURE

The White House, "Executive Order on Protecting Public Health and the Environment and Restoring Science to Tackle the Climate Crisis," Jan. 20, 2021

The White House, "Presidential Memorandum Regarding Construction of the Keystone XL Pipeline," Jan. 24, 2017