A new one circulating on social media criticizes the commander in chief for supposedly doing away with a Trump-era investigative operation into child sex rings.

"Biden cancels Trump’s child sex ring operation which saw thousands of arrests last year. Why would he do that?" the Facebook post reads. 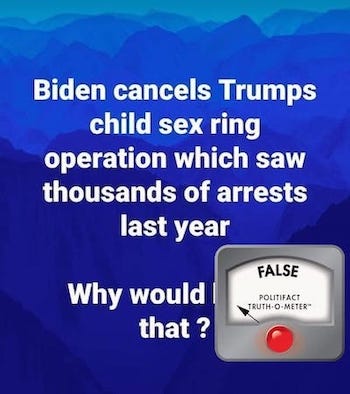 It’s not clear what the post is referencing. But we know that Immigration and Customs Enforcement (ICE) recently postponed a program known as "Operation Talon," which was created to target undocumented immigrants with known criminal activity related to sex offenses.

The operation’s focus was not only on child sex-related crimes, and there’s no evidence it amassed thousands of arrests in 2020, as the post claims. That’s because Operation Talon was initiated in the final weeks of Trump’s administration.

ICE in early February shelved the program, one of a number of actions that signaled a shift in enforcement plans as it awaited guidance from newly appointed Homeland Security Secretary Alejandro Mayorkas. An agency spokesperson said that the Biden administration had nothing to do with the suspension. It’s unclear whether or when Operation Talon will be operational.

Operation Talon was meant to target immigrants who are in the country without legal immigration status and who had pending criminal charges with known criminal activity related to sex offenses. It was a new effort under the agency’s Sex Offender Alien Removal initiative, or SOAR. That initiative is still ongoing, and ICE also investigates sex offenses involving U.S. citizens and noncitizens through its Homeland Security Investigations division.

There is no evidence that Operation Talon was up and running, let alone that it had managed to make "thousands" of arrests in 2020, as the Facebook post claims, given that it was created just weeks before Biden took office.

Claims that Biden canceled the program appear to have started after a Washington Post story examined some forthcoming changes that the agency announced Feb. 18.

This isn’t accurate. Operation Talon was not focused on child sex offenders; it was created to target immigrants in the country illegally who were convicted of sex crimes. It was put on pause by ICE officials as the agency awaits new operating guidelines from the Biden new administration.

The agency still investigates sex offenses through its Sex Offender Alien Removal initiative, or SOAR," and through its Homeland Security Investigations division. There’s no evidence that the program, which was said to have started weeks before Trump left office, was already in operation or responsible for thousands of arrests.