See the sources for this fact-check
A social media post said that people with no DUIs can receive money back by entering their zip code to a website.

"I’m so grateful for my neighbor (who works for the DMV) who told me about this!" read the text with a since-deleted July 22 Facebook post. "Drivers with no DUIs are getting up to $610 back in savings. I simply entered my zip and got $610 back just for having a good record."

The post showed two pictures of people holding checks for $610 along with a link to a website that proclaimed, "All 50 States Approve $610 in Savings for US Drivers with No DUIs." The post told people to "check eligibility" at a link on the site.

The post was flagged as part of Facebook’s efforts to combat false news and misinformation on its news feed. (Read more about PolitiFact’s partnership with Facebook.) 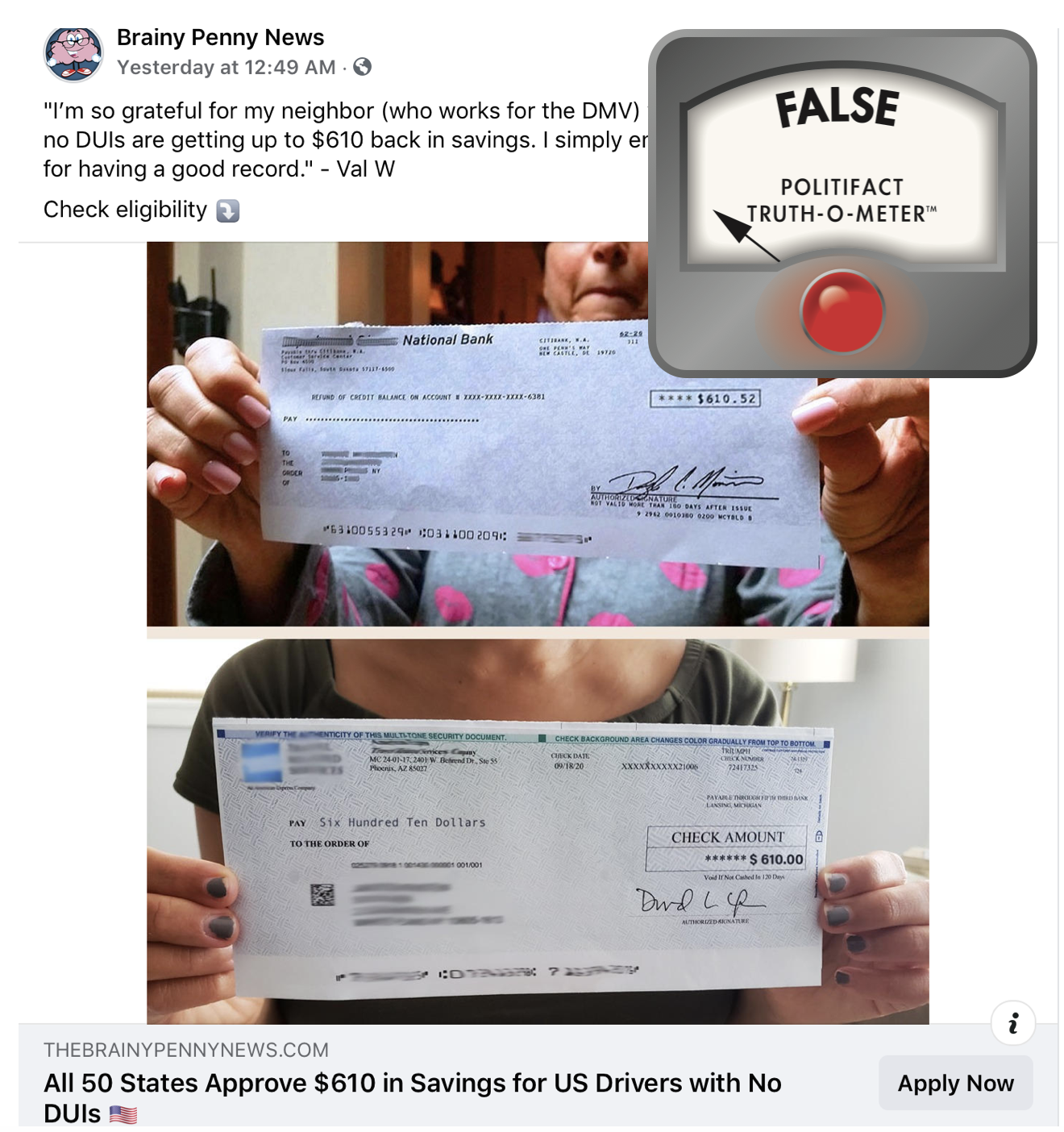 (Screengrab from Facebook)
It’s not clear what the headline is referencing, but we found no evidence "all 50 states" have approved sending money to drivers who don’t have DUIs. Experts and state DMV leaders told us they hadn’t heard of anything like that either.
When you click on the link from the post, it takes you to a website for The Brainy Penny and prompts you to enter a zip code. It then asks you to answer a series of questions, including the year, make, and model of your vehicle; whether your car is financed, owned, or leased; the name of your insurance provider; your gender, education, occupation and credit score; and any traffic violations.
PolitiFact contacted the website’s publishing company to ask about the post but did not get a response.
Robert Passmore, vice president of auto and claims policy at the American Property Casualty Insurance Association, said he was unaware of any programs offering people checks for not having any DUIs.
"There are, however, programs that have ‘vanishing deductibles’ or ‘accident-free’ bonuses," Passmore said, "but they aren’t tied to not having a DUI."
Alex Hageli, director of personal auto, electronic issues, specialty lines and counsel at the American Property Casualty Insurance Association, said DUIs do usually increase a person’s premium. "However, having a DUI does not necessarily guarantee you will pay more than someone who does not have one, depending on your overall profile and another driver’s overall profile," he said. "Auto rating factors all play off of one another to produce a premium, and one factor can negate another depending on its weight compared to another."
PolitiFact contacted several states to find out if they were aware of any such program to send checks to people who don’t have DUIs. A spokesperson for the Washington, D.C., Department of Motor Vehicles said that they maintain driver records that include details related to drivers licenses (class, issue date, expiration date, etc.) and a summaries of all traffic violations, but the office does not have funding for a program like the post described. Similarly, a spokesperson with California Department of Motor Vehicles said that the department handles driving records but "it does not have a program that gives people money for not having a DUI."  The Arkansas Department of Finance and Administration, which oversees driver’s licenses in the state, and the Tennessee Department of Safety & Homeland Security also said that they do not have programs that reward licensees for not getting DUIs.
This isn’t the first time a post like this has been flagged. Houston television news station KHOU 11 flagged a similar post in June and determined the post was a potential scam.
There is no evidence states are sending money to people who don’t have DUIs.
We rate this claim False.

Verify, Post claiming the DMV is sending people money for not having a DUI is false, June 4, 2021

Email exchange with a representative from California DMV Office of Public Affairs, July 23, 2021

Email exchange with a representative from Washington D.C. Department of Motor Vehicles, July 22, 2021

Email exchange with Scott Hardin, spokesperson for the Arkansas Dept. of Finance and Administration, July 22, 2021

Facebook posts
stated on July 25, 2019 Facebook:
Quotes Abraham Lincoln as saying, “You cannot help the poor by destroying the rich.”

Viral image
stated on July 23, 2021 Facebook:
Photo shows the place where “the Atlantic Ocean and the Pacific Ocean face each other without mixing.”

Tweets
stated on July 17, 2021 a tweet:
Olympic Village has cardboard beds “to prevent Olympians from having sex, and thus risk spreading (COVID-19).”