A giant container ship that found itself stuck sideways in the Suez Canal has finally been freed after creating a maritime traffic jam and disrupting global shipping.

But the incident spurred some online to claim that it was no accident and that Google Earth suspiciously blocked people from seeing the canal.

"Why’d Google earth block the Suez Canal?" one Facebook post questions while displaying screenshots from Google Earth that appear to show a large portion of the canal in a starkly darker blue compared to the rest of the passage.

"You know, because..censorship," another said. 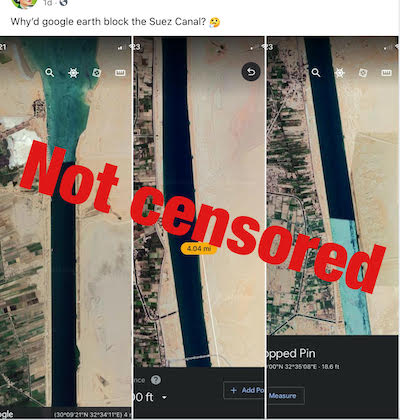 There is nothing nefarious about Google Earth’s imagery of the canal, which was there before the ship blockage occurred. The program does not operate in real time, and includes satellite, aerial, 3D and street view images that are collected over time from various providers and platforms.

"The mosaic of satellite and aerial photographs you can see in Google Maps and Google Earth is sourced from many different providers, including state agencies, geological survey organizations and commercial imagery providers," Matt Manolides, a satellite imagery expert at Google, said in a company blog post. "These images are taken on different dates and under different lighting and weather conditions."

The inconsistency in the water color of the Suez Canal is due to a difference of day-to-day lighting conditions and camera angles, and a similar effect can be seen at other locations on Google Earth. 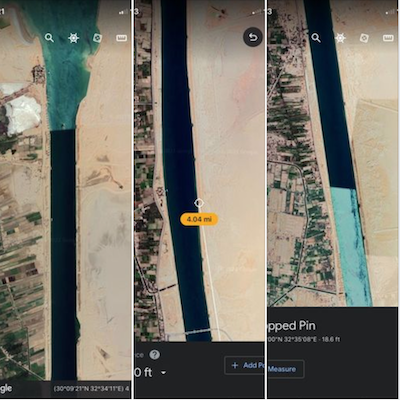 The artifacts are sometimes produced when Google Earth stitches satellite images together. They normally aren't so noticeable, but satellite imagery of water can sometimes make stitching more visible, according to Google.

Other places that show a similar effect include the Panama Canal, Straits of Gibraltar and Loch Ness.