Facebook posts
stated on March 25, 2021 in an online video:
If the voting bill H.R. 1 is passed, “absentee ballots would be mailed out to anyone without proof of the voter’s identity.”

A man leaves the polling place where about 100 mostly masked northern Nevadans were waiting to vote in person in Sparks on Nov. 3, 2020. (AP)

• A few states already do send ballots to all registered voters, but their process would not be changed by the bill. In every other state, voters would need to choose to receive a mail ballot by notifying election officials.

• In addition, anyone receiving a ballot by mail must be registered, which means that election officials will know their identity.

• The bill does require states to send mail ballot application forms to all registered voters before federal elections, but sending an application is not the same thing as sending an actual ballot.

An expansive voting rights bill that passed the House has inspired a flood of claims on social media.

The measure, known as H.R. 1 or the For the People Act, passed the House narrowly on a near-party-line vote, and the bill is now under consideration in the Senate.

A conservative group posted a video to Facebook that calls the bill a "recipe for disaster."

The video says in part, "The 2020 election was a procedural nightmare. Many people wonder whether it was fair and honest. And now Nancy Pelosi and the Democrats want to make all of that permanent with what they call the For the People Act. If passed, it would put Congress in charge of our elections. Absentee ballots would be mailed out to anyone without proof of the voter’s identity." 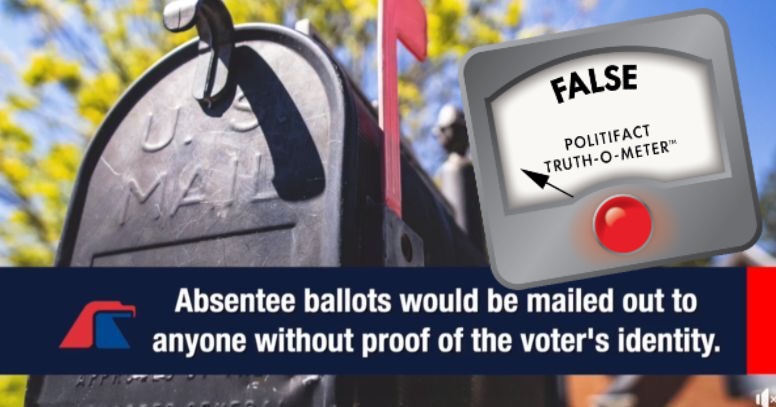 The 2020 election saw record turnout, and widespread use of absentee ballots, due in part to the pandemic. A joint statement by federal and state election officials on Nov. 12 declared the 2020 election "the most secure in American history."

But here, we will focus on the statement that, if the bill is passed, "absentee ballots would be mailed out to anyone without proof of the voter’s identity." In short, it’s inaccurate. The Conservative Caucus did not reply to an inquiry.

The group’s statement describes elements of a process used by a handful of states that use "all-mail elections," and suggests that they would be universal if the bill is passed.

In all-mail elections, ballots are automatically mailed to every registered voter. "The voter marks the ballot, puts it in a secrecy envelope or sleeve and then into a separate mailing envelope, signs an affidavit on the exterior of the mailing envelope, and returns the package via mail or by dropping it off," according to the National Conference of State Legislatures.

This system is used in Colorado, Hawaii, Oregon, Washington state and Utah. In addition, California has moved to temporarily extend its use of all-mail voting after adopting it during the coronavirus pandemic. Some all-mail election states offer an in-person alternative for voting as well, but it’s used infrequently.

The key point for our analysis of H.R. 1 is that the bill doesn’t force any state to adopt the all-mail system and send out ballots automatically.

Rather, the bill’s focus is on making it easier for registered voters who choose to cast their ballot by mail. The bill requires states to give everyone access to voting by mail if they want to use it.

And under the bill, those mail ballots would be sent to registered voters who want them, not "anyone." Because they’re registered, their identity would already be known to state election officials.

Opting in to mail voting

In addition, H.R. 1 lets states treat one request for a mail ballot as that voter’s default choice for future elections. The bill doesn’t require this, but it offers states the option.

So the video’s claim of ballots being sent "without proof of the voter’s identity" is false. The voter would be registered, so their initial application and supporting information would be on file. And in many cases, a voter would have also filed a second form to request a mail ballot.

H.R. 1 says that a valid registration requires the applicant to have "substantially completed the application form and attested to" the statements in it.

H.R. 1 also requires that states offer "automatic voter registration," a system by which other state agencies, such as the department of motor vehicles, automatically register new voters,  subject to verification of their eligibility. (Individuals could decline to register by opting out.)

Nationally, nearly 20 states and the District of Columbia already use this system, including such Republican-run states as Alaska and West Virginia.

This provision of H.R. 1 is about registering to vote, not mailing ballots. Only in the all-mail states would ballots go out automatically to these newly registered voters.

H.R. 1 does require states that aren’t all-mail to send out absentee ballot application forms to all registered voters, no later than 60 days before a federal election.

But this provision doesn’t support the claim in the video that "absentee ballots" are being mailed out.

A ballot application, once completed and returned by the voter, is just a request for a mailed ballot. And under the bill, the application forms would be sent to registered voters only.

The post says that if the voting bill H.R. 1 is passed, "absentee ballots would be mailed out to anyone without proof of the voter’s identity."

That’s not the case. A few states already do send ballots to all registered voters, but their process would not be changed by the bill. In every other state, registered voters would typically have to request a mail ballot to receive one. The bill would require states to make it easier for voters to do that.

National Conference of State Legislatures, "Voting Outside the Polling Place: Absentee, All-Mail and other Voting at Home Options," Sept. 24, 2020