Viral image
stated on February 5, 2021 in a Facebook post:
Image of expansive pit shows a lithium mine.

A frequently debunked meme purporting to show the barren landscape of a massive lithium mine is again making the rounds on social media.

"Finished pipeline," the top of the image reads in a February Facebook post. It shows a pristine, grassy expanse allegedly covering an oil-extraction apparatus.

"Lithium mine," reads the text across the adjoining bottom image showing an expansive and arrid pit. "Your environmental argument is stupid." 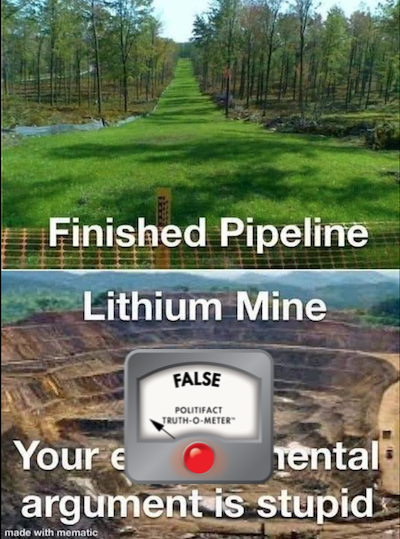 (Screengrab from Facebook)
The problem is that the photo allegedly showing the lithium mine isn’t a lithium mine at all — a reverse Google Image search shows that the photo is actually a photo of a copper and cobalt mine in the Democratic Republic of Congo, published by Reuters in January 2013.
Photos of other copper mines, such as this photo of the Escondida mine in Chile, have also previously been co-opted and falsely identified as lithium sites in other viral Facebook posts. The photo of the Escondida copper mine in particular has been published multiple times in varying contexts dating as far back as 2011.
Unlike lithium, copper is primarily extracted from open-pit mines and typically involves tiered levels. Explosives and drills are used to break apart rock matter, according to a report from the University of Arizona’s Superfund Research Center.
Most lithium is extracted from salty liquid brines that are far beneath the Earth’s surface, according to the Minerals Education Commission — not open-pit mines like the copper one shown in the photos.That’s not to say lithium isn’t ever extracted from open-pit mines, it’s just less common and often involves smaller pits.
While lithium is more frequently derived from these brines, according to MEC, the element can also be extracted from certain rock minerals like spodumene and petalite, though that process is more laborious and costly.
Other fact-checking organizations — like Snopes in 2016 and Australian Associated Press FactCheck in February — have tackled similar misleading claims about lithium production over the years as they appear on social media.
Our ruling

While there are mines that sometimes extract lithium from rock mineral sources in open pits, the image in the post is of a copper mine, not a lithium mine. We rate this claim False.