Facebook posts
stated on September 27, 2021 in social media posts:
“Were you aware the $3.5 Trillion Human Infrastructure package includes an animal agriculture tax of $2,600‼️ per head of cattle? $500 for swine!!!"

A Jersey cow feeds in a field at an organic dairy farm in Fairfield, Iowa. (AP)

• Democrats are considering a legislative proposal to tax methane emissions by oil and gas producers as a way of curbing climate change. However, the proposal does not apply to methane released by livestock operations.

• The Senate passed an amendment to rule out a methane emissions tax on agriculture.

As congressional Democrats seek to assemble legislation enacting President Joe Biden’s policy agenda, critics have taken to social media to attack what they say is one of its provisions: Hundreds or even thousands of dollars in new methane emissions taxes on each head of cattle and hogs.

One representative post from Sept. 27 said, "Were you aware the $3.5 Trillion Human Infrastructure package includes an animal agriculture tax of $2,600!! per head of cattle? $500 for swine!!! People it’s time to make some noise!!! This will destroy us all!! No cows no swine no meat!!!"

As evidence, the post includes a photograph of a newspaper op-ed written by Rep. Markwayne Mullin, R-Okla. (although the newspaper piece’s byline misspells the congressman’s name as "Mullins").

"In an attempt to eliminate fossil fuels, this legislation would impose a 'fee' on all methane emissions, including in our agriculture industry," Mullin wrote. He went on to specify costs of $6,500 per dairy cow, $2,600 per head of cattle, and $500 per swine.

Similar posts were shared by thousands of users. The post was flagged as part of Facebook’s efforts to combat false news and misinformation on its News Feed. (Read more about our partnership with Facebook.)

PolitiFact confirmed that there is no new animal methane tax, and there’s no sign it’s even under consideration. Instead, it’s a misinterpretation of an entirely separate policy proposal.

"There is no ‘cow fart tax,’" said John Buhl, senior communications manager at the Urban Institute-Brookings Institution Tax Policy Center. "It does not exist." 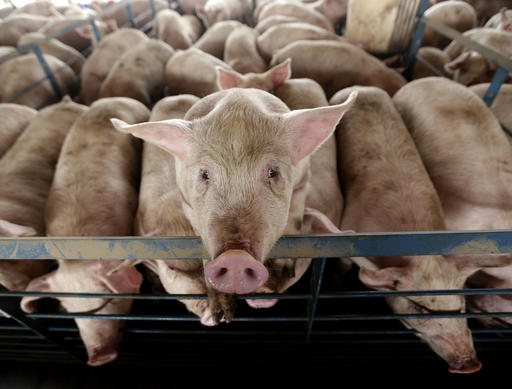 A pig looks out of its pen at a hog feeding operation near Tribune, Kan. (AP)

Meredith Blanford, a spokesperson for Mullin, said the op-ed was referring to legislative language considered by the House Energy and Commerce Committee that would levy a methane tax on oil and gas producers. The provision would tax oil and gas producers $1,500 per metric ton of methane emitted above a threshold.

Methane is a contributor to climate change, and environmentalists have sought to curb its release into the atmosphere. Methane is "the source of one-third of U.S. methane emissions," said Frank Mitloehner, a professor and air quality extension specialist in the University of California-Davis animal science department. "Getting methane right and not using food as a political football is critical to climate science."

When the committee took up the provision, Republicans offered an amendment to exempt livestock from being caught up in enforcement of the methane provision targeted on oil and gas. "While the language specifies the oil and gas industry, it also references EPA’s greenhouse gas inventory and leaves too much room for the EPA to expand its regulatory reach," Blanford said.

The amendment failed, with Democrats arguing that it was unnecessary because the provision was explicitly targeted toward fossil fuels, not agriculture.

Blanford said the numbers listed in the op-ed came from an analysis by the American Farm Bureau Federation, an agriculture advocacy group. But the group has since clarified that its analysis was theoretical and not descriptive of actual legislation that targeted agricultural emissions.

The federation’s communications director, Mike Tomko, told PolitiFact that the data came from an analysis conducted by the group’s economists this past summer, "to determine the potential impact if agriculture were to be included in legislation imposing a methane fee similar to legislative proposals aimed at oil and gas."

However, Tomko added that "the current language" of the bill "does not impose a methane tax on agriculture." Two days after the interview, the federation released a public statement reiterating this point, "to clear up any confusion."

The National Cattlemen’s Beef Association concurred in a statement to USA Today. "Ultimately, the rumors relative to a potential cow tax are just that — rumors," said Danielle Beck, the group’s senior executive director of government affairs. "And we view it as an unhelpful distraction from the issues at hand."

To further remove any doubt, the Senate on Aug. 10 passed an amendment sponsored by Sen. Joni Ernst, R-Iowa, related to "prohibiting or limiting the issuance of costly Clean Air Act permit requirements on farmers and ranchers in the United States or the imposition of new federal methane requirements on livestock."

The amendment passed, 66-33, with 17 Democrats joining Republicans in voting for it. That was more than two weeks before the Facebook post went public.

A Facebook post said, "Were you aware the $3.5 Trillion Human Infrastructure package includes an animal agriculture tax of $2,600!! per head of cattle? $500 for swine!!!"

Democrats are considering a legislative proposal to tax methane emissions by oil and gas producers as a way of curbing climate change, but the proposal was not written to apply to methane released by livestock operations.

Two leading agriculture groups have explicitly said that there’s no agricultural methane tax proposal under serious consideration, and the Senate passed an amendment to rule out a methane emissions tax on agriculture.

Email interview with Ermias Kebreab, associate dean of the College of Agriculture and Environmental Sciences at the University of California-Davis, Sept. 28, 2021