Facebook posts
stated on March 30, 2022 in a Facebook post:
“Democrat’s New Plan: Tax billionaires to lower the deficit by $1 TRILLION and fund clean energy independence. Republican’s New Plan: Raise taxes on households earning less than $50,000 by an ADDITIONAL $4,500 after CUTTING taxes for the rich.”

President Joe Biden speaks about his proposed budget for fiscal year 2023 in the State Dining Room of the White House, Monday, March 28, 2022, in Washington. (AP)

A liberal group’s Facebook post comparing tax plans from Democrats and Republicans exaggerated the proposed changes and lacked important context about both policies.

The March 30 Facebook post claimed that a Democratic proposal would "tax billionaires to lower the deficit by $1 TRILLION and fund clean energy independence," while a Republican-backed plan would "raise taxes on households earning less than $50,000 by an ADDITIONAL $4,500 after CUTTING taxes for the rich." The post instructed viewers to "vote accordingly." 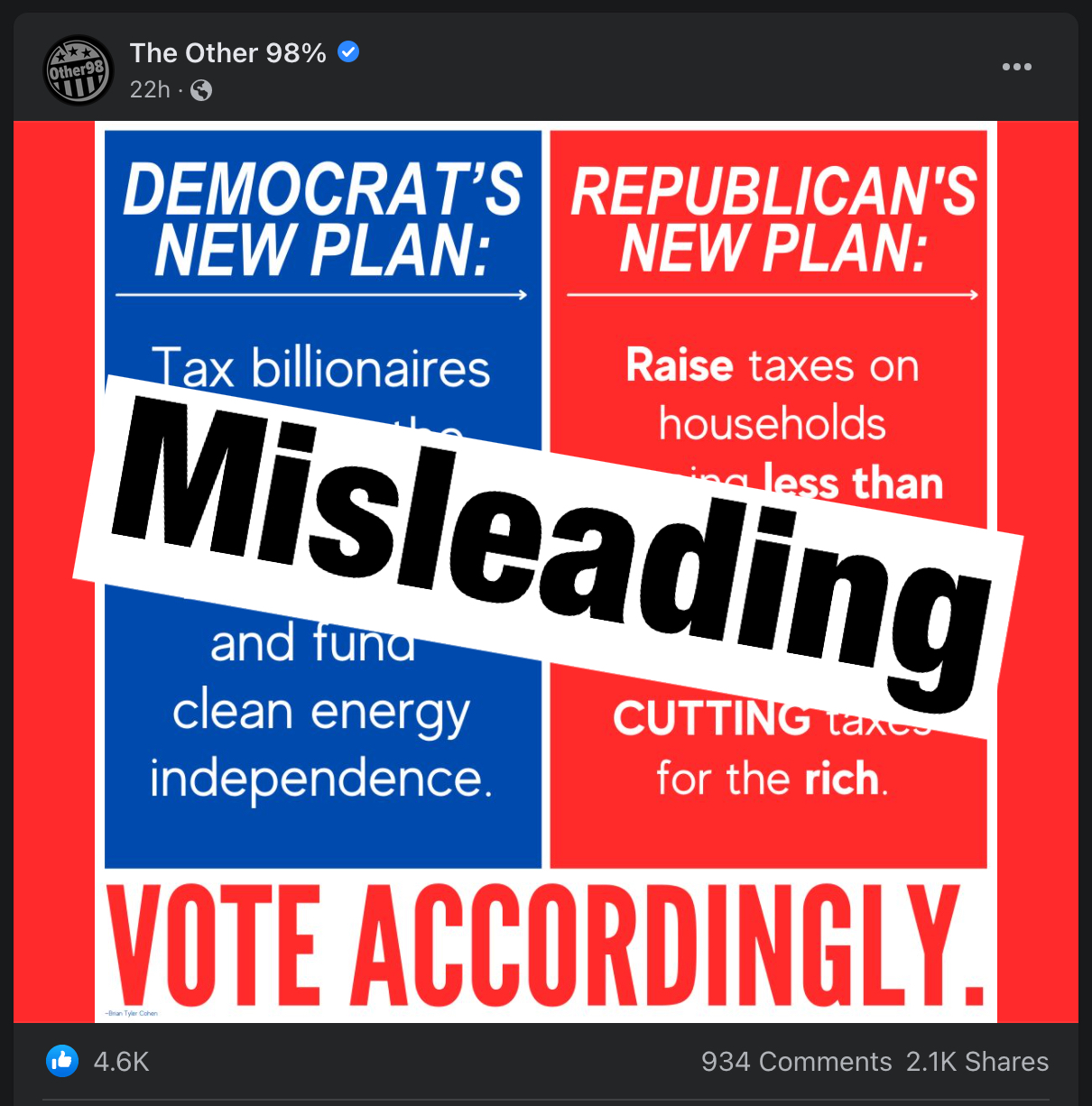 The "Democrat’s plan" mentioned in the claim points to parts of President Joe Biden’s proposed budget for 2023. The "Republican’s plan" appears to be a reference to an 11-point proposal Sen. Rick Scott, R-Fla., released in February. Let’s dive into both.

The description of Biden’s budget proposal overstated the impact a higher tax on wealthy individuals would have on the country’s deficit. It also lacked broader context about how much debt the U.S. would still accrue, even after factoring in this tax revenue.

While it’s true that billionaires would be subjected to higher taxes under Biden’s proposed budget, so would some millionaires. The name of the tax itself, the "Billionaire Minimum Income Tax," is misleading since it would impose a tax on all households worth more than $100 million. Under this rule, wealthy individuals would pay a tax rate of at least 20% of their income, including any unrealized capital gains, such as stocks.

If approved, this tax would impact about 20,000 households, or less than 0.01% of the country’s population, said Howard Gleckman, a senior fellow at the nonpartisan Tax Policy Center. Most of the people impacted would be multimillionaires. There are roughly 700 billionaires in the U.S.

The Biden administration estimated this tax would generate $360 billion in revenue over the next decade — not the full $1 trillion that the claim suggested. The rest would be made up by other measures in Biden’s budget proposal, but that, too, lacks detail.

"That overall budget includes a lot of blanks right now. There's a big kind of magic asterisk in this budget," Gleckman said.

One missing piece in Biden’s budget is any effect of Build Back Better legislation, a domestic spending package of Biden priorities that remains stalled in Congress. It’s not clear how much spending will be included in these bills, how Congress will pay for it, and what the effect on the deficit would be.

"Without knowing that, this budget doesn't really lower the deficit by $1 trillion. It aspires to it, but it doesn't do it," Gleckman said.

Clean energy initiatives are a big focus of Biden’s budget, as the claim said. The plan sets aside $45 billion for the federal government to address climate change, including $90 million to modernize the country’s electrical grid and $502 million to weatherize and retrofit low-income housing, among other initiatives.

In February, Scott put forth a proposed agenda if the GOP were to win the majority in Congress after the midterms. Scott is chairman of the National Republican Senatorial Committee. One part of the agenda opines that all Americans should pay income tax.

"All Americans should pay some income tax to have skin in the game, even if a small amount. Currently over half of Americans pay no income tax," Scott’s plan states.

Some Americans don’t owe any federal income tax because they don’t earn enough money to have income tax liability and they may receive tax credits. The share of people who did not pay income tax increased during the pandemic to 61%, up from 40% in 2019. This percentage dropped to 57% last year and is expected to continue to decrease to about 42% in 2022, according to the Tax Policy Center.

Scott’s plan does not provide any details as to how much Americans who don’t pay income taxes would be taxed under his outline, so the $4,500 is rather baseless.

The Tax Policy Center conducted an analysis to estimate how much people who don’t currently pay income tax would owe under Scott’s proposal. Hypothetically, every household would owe at least $100 in income tax, no matter how much they earned. Creating a minimum income tax for all Americans would eliminate tax credits and lower the standard deduction for low- and middle-income earners.

In this model, households earning less than $27,000 a year would pay an average of $1,000 more a year in taxes. This estimate is much lower than the $4,500 amount asserted in the claim.

The part of the claim that says this tax increase would occur "after cutting taxes for the rich" presumably is a reference to the GOP’s 2017 Tax Cuts and Jobs Act. This legislation cut taxes for most Americans, not just wealthy individuals.

A Facebook post claimed that the Democrats’ proposal would "tax billionaires to lower the deficit by $1 TRILLION and fund clean energy independence," while the Republicans’ plan would "raise taxes on households earning less than $50,000 by an ADDITIONAL $4,500 after CUTTING taxes for the rich."

The claim exaggerated what both the Democratic proposal and the Republican plan would do, if implemented. It also left out broader context about the initiatives and who proposed them.

Tax Policy Center, "The COVID-19 Pandemic Drove A Huge, But Temporary, Increase in Households That Did Not Pay Federal Income Tax," Aug. 18, 2021

The New York Times, "Deficit would fall by $1 trillion over a decade under the proposed budget.," March 28, 2022