Joe Biden
stated on April 14, 2022 in a speech at North Carolina A&T State University:
"For four years, I was a full professor at the University of Pennsylvania."

• Biden served as Benjamin Franklin Presidential Professor of the Practice at the University of Pennsylvania between his tenure as vice president and the start of his presidential campaign.

• However, the duration of his position was closer to two years than it was to four, since he was on unpaid leave while running for president.

• Biden’s duties did not include the same degree of teaching, research and administrative responsibilities that some may associate with the term “full professor.”

During a visit to North Carolina A&T State University in Greensboro, N.C., President Joe Biden broke the ice with his audience by saying he shared some common ground with members of the university community.

"I've been to a lot of university campuses," Biden said April 14. "Matter of fact, for four years, I was a full professor at the University of Pennsylvania. And this is really an impressive place with a lot of impressive students."

A reader asked us to fact-check whether Biden really was a full professor for four years.

Biden served as Benjamin Franklin Presidential Professor of the Practice at the University of Pennsylvania between his tenure as vice president and the start of his presidential campaign. However, the duration of the position was closer to two years than four, since he was on leave while running for president. Also, his duties might not conform to the full range of activities that the public might associate with the term "full professor," including teaching semester-long classes, conducting independent research, and handling administrative responsibilities.

The White House did not respond to requests for comment.

According to the university’s faculty handbook, the rank of practice professor "is confined to a small number of untenured full-time professorships" in certain schools at Penn that permit the addition to the faculty of "distinguished, highly experienced individuals who have achieved success in their fields and whose skills and knowledge are essential to the educational process at both the undergraduate and graduate levels."

The handbook describes the "primary" activity of a practice professor as teaching, though they may also "supervise independent studies and internships, serve on committees and attend school faculty meetings."

According to the tax forms he has released, Biden received more than $900,000 from the university for holding the position between 2017 and 2019. His post "involved no regular classes and around a dozen public appearances on campus, mostly in big, ticketed events," the Philadelphia Inquirer reported.

Specifically, the Inquirer reported, Biden’s appearances included "three Q-and-As with Penn president Amy Gutmann, panel discussions on immigration and cancer, a talk about his book, a lecture to a Wharton class, and public conversations with former Mexico President Felipe Calderon and former United Kingdom Deputy Prime Minister Nick Clegg, according to a tally by the student newspaper, the Daily Pennsylvanian."

As part of the post, Biden also established the Penn Biden Center for Diplomacy and Global Engagement in Washington for the university. Biden’s professorship included affiliations with the Annenberg School for Communication, Penn’s School of Arts and Sciences, and the Wharton School.

However, shortly after Biden’s appointment was announced in 2017, Kate Bedingfield, a Biden spokesperson, told The Daily Pennsylvanian that Biden would not be teaching regular classes. 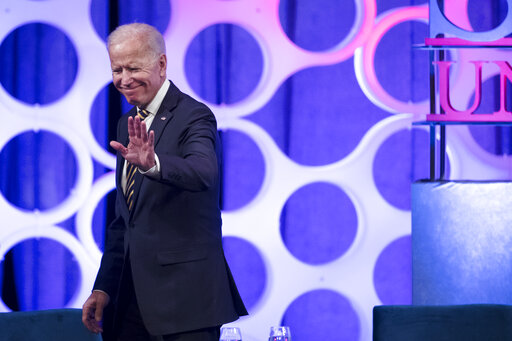 Joe Biden at a forum on the opioid epidemic at the University of Pennsylvania on April 11, 2019. (AP)

Biden was the first individual to hold the Franklin professorship, and his tenure overlapped with the second holder: former Florida Gov. Jeb Bush, a Republican. Biden and Bush held at least two joint events on campus, the Inquirer reported.

Biden went on an unpaid leave of absence in April 2019, when he became a presidential candidate, meaning that his time as an active holder of the professorship was about two years, not four as Biden said in his North Carolina speech.

PolitiFact asked the University of Pennsylvania about the differences between Biden’s position and those of a rank-and-file full professor.

"Penn has many different models of professorships," Ron Ozio, the university’s director of media relations, told PolitiFact. "Not all are tenure-track and involve teaching regular classes. Some are clinicians, some are researchers, and others are professors of the practice, the category that applied to President Biden."

Ozio added that the university was satisfied with Biden’s tenure.

Biden was "phenomenally successful," Ozio said. "He helped to expand the university’s global outreach, while sharing his wisdom and insights with thousands of Penn students through University-wide events, talks and classroom visits."

Biden said, "For four years, I was a full professor at the University of Pennsylvania."

Biden served as a "professor of the practice" at the University of Pennsylvania. However, the duration of his position was closer to two years, since he was on unpaid leave while running for president. His duties of his particular professorship did not include the same degree of teaching, research, and administrative responsibilities that some would associate with someone holding a position as "full professor."

University of Pennsylvania, "A Message to the Penn Community Regarding Vice President Joe Biden," April 30, 2019

Philadelphia Inquirer, "Penn Has Paid Joe Biden More than $900K since He Left the White House. What Did He Do to Earn the Money?" July 12, 2019

Daily Pennsylvanian, "Biden’s Claim of Being a "teacher" at Penn Drew Scrutiny. Here’s What His Role Really Was," April 17, 2020

Daily Pennsylvanian, "Photo Essay: A look back at Joe Biden’s visits to Penn since becoming a professor," Feb. 20, 2019

Snopes.com, "Was Biden a ‘Full Professor’ at the University of Pennsylvania?" April 15, 2022

Email interview with Ron Ozio, director of media relations for the University of Pennsylvania, April 19, 2022