Recent fires at food processing plants across the United States have sparked several conspiracy theories that someone is setting them intentionally in order to hasten a food shortage.

"None of the other scams worked, so now they'll attempt to starve us," read an April 21 Facebook post. It shared a screenshot of a tweet that notes an "odd coincidence" that "18 U.S. food processing facilities burned down in the last six months." 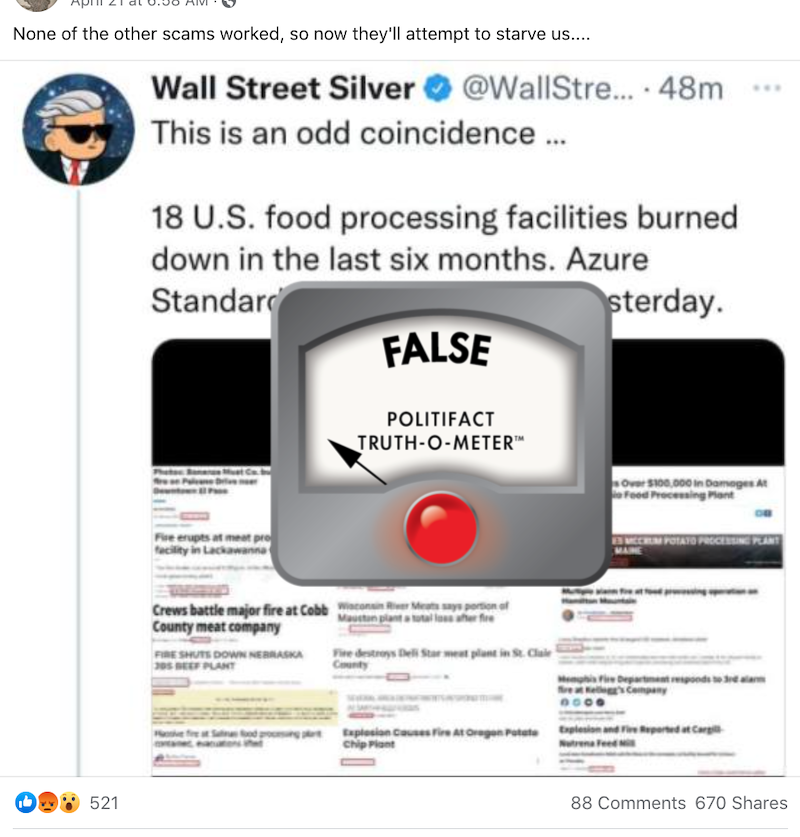 (Screengrab from Facebook)
It’s not clear what anyone would have to gain by starving Americans — though at least one post suggests that Bill Gates would — but the conspiracy theory is spreading like, um, wildfire on social media and conservative websites.
Fox News host Tucker Carlson added fuel by noting two other recent fires and asking in an April 22 segment, "What is going on here, exactly?"
Carlson said in the past week that small planes crashed at a General Mills plant in Georgia (it crashed near the plant, which was not damaged) and the Gem State Processing Plant in Idaho. In that crash, a pilot delivering packages for UPS died in a crash that her father told a local newspaper was due to unsafe conditions caused by steam from a nearby chimney at the plant. The plant itself did not appear to suffer much damage, photos of the scene show.
We looked at each of the 18 fires mentioned in the Facebook post and found no evidence that any of them were intentionally set.

Twelve were either ruled accidental, or no foul play was suspected. One was at a vacant building that once housed a meat plant. In five others, the fires are either still under investigation or investigators have not publicly announced any cause found — intentional or otherwise.

Some of the plants were completely destroyed or heavily damaged, while others suffered minor damage with little impact on food production. Though the post said the 18 fires happened in the past six months, only 12 of those happened in that time frame.
Fires at large food processing plants can have a big effect on the nation’s food supply. Four large companies account for about 70% U.S. beef production, according to data from the North American Meat Institute. A 2019 blaze at a Tyson’s beef processing plant in Holcomb, Kansas, halted production there for four months, causing numerous supply chain and pricing issues.
The American Association of Meat Processors said in a statement to PolitiFact that there doesn’t appear to be any evidence of a deliberate attack on the food industry in the cases cited in the Facebook post.
Tom Super, senior vice president of communications at the National Chicken Council, a trade group that represents chicken producers, also doesn’t see any cause for concern.
"I can only speak for chicken, but like any manufacturing plant/industry, there are generally a few fires that occur each year across the country. Most of them are contained rather quickly, and certainly not enough to affect the chicken supply," Super said. "There are about 200 federally inspected chicken slaughtering plants in the U.S. and thousands more that further process chicken. I would not categorize this as an ‘alarming trend.’"
The U.S. Department of Agriculture said on its website that there are currently no food shortages or widespread disruptions of the food supply in the country, although availability of some products may be temporarily low at times.
And PolitiFact recently spoke with food experts who said that even if the war in Ukraine affects supplies elsewhere, the U.S. is largely self-sufficient.
Here’s what we know about the fires

• A fire destroyed the headquarters of Azure Standard, a distributor of organic food in Dufur, Oregon. The cause of the fire is still under investigation, the company said in a press release on April 19. It said a few product lines may be affected, but the impact on operations should be "limited and temporary."

• A fire destroyed a Taylor Farms Processing Facility in Salinas, California, on April 13. The company produces and distributes wholesale salad products and will now shift production to its Arizona facility. The company’s CEO told KSBW Action News that it plans to rebuild the facility and that the fire was likely the result of a welding accident.

• An April 12 fire destroyed the East Conway Beef & Pork butcher shop and slaughterhouse in Conway, New Hampshire. The cause of the blaze is still under investigation as of April 22, according to the New Hampshire State Fire Marshal’s office.

• A fire that destroyed the Penobscot McCrum potato processing plant in Belfast, Maine, on March 24 was accidental, the Associated Press reported. Officials believe it started in a large deep-frying machine, according to the Portland Press-Herald.

• A March 16 fire caused extensive damage to a new production line dedicated to Hot Pockets at a Nestle plant in Jonesboro, Arkansas. But that fire was not the result of foul play or anything suspicious, but rather a welding accident, Jonesboro Fire Chief Kevin Miller said.

• A propane boiler explosion caused a fire that destroyed the Shearer's Foods potato chip plant in northeast Oregon on Feb. 22. It’s not clear if the company will rebuild there, but its website said that it has 12 production plants.

• A fire destroyed a building that used to be the home of the Bonanza Meat Co. in El Paso, Texas, on Feb. 15. The building had been vacant for several years, according to a local CBS affiliate.

• A fire destroyed part of the Wisconsin River Meats site in Mauston on Feb. 3. The business serves as a meat processor for farmers, livestock producers and hunters in the region, and also has a retail shop. The cause of that blaze was construction-related, David Mauer, the company’s vice president and owner, told PolitiFact. The company was fulfilling pickup orders at its warehouse three days later and opened a new storefront on April 21.

• An explosion and fire damaged the Cargill-Nutrena plant in Lecompte, Louisiana, on Jan. 13. Cargill-Nutrena did not return a request for comment and it’s not clear if the site, which produces animal feed, had to halt production.

• A fire did extensive damage to a poultry processing plant in Hamilton, Ontario, on Jan. 6, according to CHCH-TV. The cause of the blaze wasn’t clear from news reports. We reached out to Hamilton fire officials for comment but have not heard back.

• A Nov. 29, 2021, fire at the Maid-Rite Steak Company meat processing plant in Scott Township, Lackawanna County, Pennsylvania, was determined by fire officials to be an accident, according to Fox56 News. The plant was left inoperable and some products that were only produced there are no longer available, the company, which has other plants, said on its website.

• A fire at the JVS USA beef processing plant in Grand Island, Nebraska, on Sept, 12, 2021, only halted production for one day. The cause of the fire was determined to be from a heater near the roof in the rendering area of the plant, according to Drovers, a beef industry trade publication.

• A fire temporarily closed Patak Meat Products in Cobb County, Georgia, on Aug. 23, 2021. No foul play was suspected, officials said. The company said on Facebook in March that it is still rebuilding, but is open for business.

• A fire broke out at Tyson's River Valley Ingredients rendering plant, which produces animal feed, in Hanceville, Alabama, on July 31, 2021. That blaze appeared to start with grease and animal by-products, the town’s mayor told the Cullman Tribune. Tyson announced on April 18, 2022, that it is building a new $208 million plant near the one lost in the blaze.

• A fire that damaged a Kellogg’s plant in Memphis, Tennessee, on July 25, 2021, was accidentally sparked when a malfunctioning conveyer belt sparked a blaze in a rice drying machine, fire officials said. We reached out to Kellogg’s to find the effect on production at the plant, but did not receive a response.

• A fire at the Smithfield Foods pork processing plant in Monmouth, Illinois, on April 30, 2021, caused "not a lot of damage" to the building, according to a local news report. A spokesperson for the Illinois State Fire Marshal said the fire was accidental and no foul play was suspected. He also said the office has not noticed any trends in fires at meat packing sites in the state.

• A Jan. 11, 2021, fire destroyed the Deli Star meat processing plant in Fayetteville, Illinois. No foul play was suspected in that fire, according to the St. Louis Post-Dispatch. A replacement facility is set to open in 2022.

A Facebook post alleges that fires at 18 food processing plants in the past six months are the result of an intentional attempt to "starve" Americans.

But of the 18 fires listed, 12 were ruled accidental, two are still officially under investigation, and no official cause has been announced on three others. One was in Canada. One was at a vacant building. And 12 happened in the past six months.

UPDATE, April 28, 2022: This story has been updated with additional information on the Smithfield Foods fire, which was determined to be accidental. The rating is unchanged.

Emailed statement from the American Association of Meat Processors, April 25, 2022

East Idaho News, "Pilot killed in plane crash was ‘adventurous, beautiful’ woman who ‘brightened the room with her smile,’" April 14, 2022

University of Nebraska Lincoln, "A Historical Perspective on the Holcomb Fire: Differences and Similarities to the COVID-19 Situation and Other Significant Market Events," Sept. 11, 2020

WKOW, "Wisconsin River Meats open for business after a near total loss," Feb. 5, 2022