Brandon re-entered controversy in an Aug. 8 Facebook post, which featured a screenshot of what appeared to be a Reuters headline claiming that a Biden administration official had included a Nazi symbol in a tweet.

In other versions of the image, also shared on Facebook and Twitter, the headline continued: "But he did so in a way that exhibits how extreme the opponents of Biden have become." 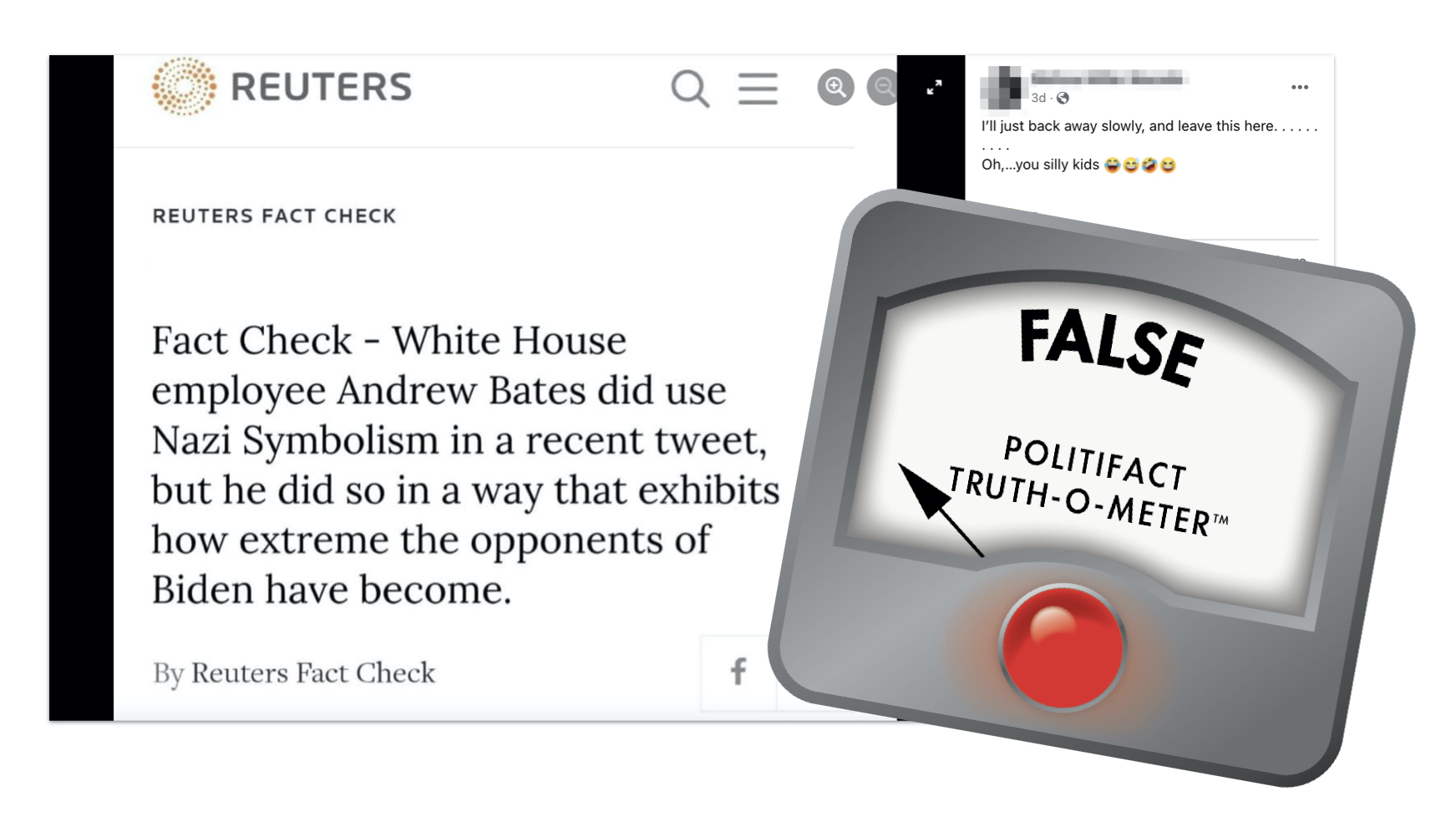 The flagged post refers to a Dark Brandon meme.

Dark Brandon is crushing it pic.twitter.com/w0L8xCzIW8

One of the memes Bates shared on Aug. 7 was reminiscent of a movie poster for the 2012 Batman movie "The Dark Knight Rises":

After the meme was shared, some Twitter users questioned whether the emblem in the background was a Nazi symbol.

Tobin Stone, the artist who first shared the Biden meme, confirmed to The Daily Dot that the meme was based on the Batman movie poster, which features a bat in the background. When making the Biden meme, Stone substituted an eagle for the bat.

"The eagle is not, and was never intended to be the Reichsadler — it was just intended to be a representation of America’s national bird, the bald eagle, and any reasonable person would interpret it as such," he told The Daily Dot.

A Reichsadler is an imperial eagle motif used by Nazi Germany.

In addition, the image in the Facebook post is not a screenshot of an actual Reuters Fact Check article. A search for the purported headline on the Reuters website turned up no matching results. Searches for the phrase "White House employee Andrew Bates did use Nazi symbolism" also returned no results.

Reuters confirmed in a statement that it did not publish a fact check about a tweet by White House employee Andrew Bates and the alleged use of Nazi symbolism. The news agency said the headline about the tweet that was attributed to Reuters Fact Check in social media posts was fabricated.

A fake screenshot claimed that Reuters Fact Check reported that "White House employee Andrew Bates did use Nazi symbolism in a recent tweet."

Reuters Fact Check did not report this.

White House staffers have shared versions of the pro-Biden "Dark Brandon" meme, including one that some Twitter users claimed featured a Nazi symbol. The meme’s creator said the design was based on a movie poster and featured an eagle, America’s national bird, not a Nazi symbol.

Mediaite, "Ben Collins warns journalists not to parrot term ‘Dark MAGA’: ‘Plenty of words for revanchist politics based on grievance and lies,’" May 20, 2022