Conservative commentator Ben Shapiro, editor-in-chief of the Daily Wire addresses a student group at the University of Utah on Sept. 27, 2017, in Salt Lake City. (AP)

A tale of two Ben Shapiros ensnared a conservative political commentator in what initially appeared to be an example of loan-forgiveness hypocrisy.

"I have a controversial idea about paying off student loan debt," conservative commentator Ben Shapiro said in an Aug. 23 tweet. "Don’t take out debt you will likely be unable to pay off, and don't ask others to pay off your debts." 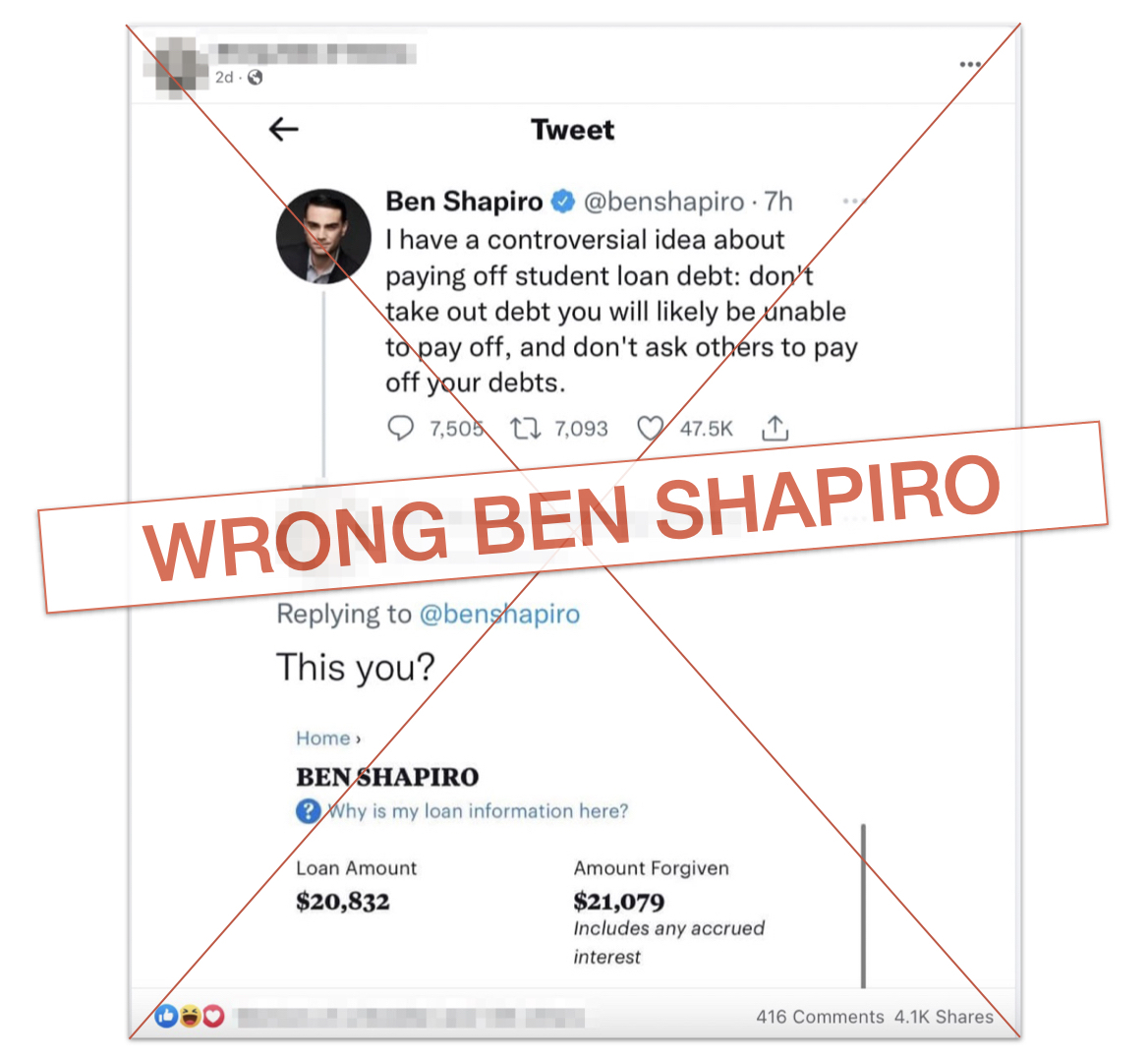 Although the screenshots looked damning at first glance, a case of mistaken identity was at play.

A Los Angeles-based Ben Shapiro received nearly $21,000 in Paycheck Protection Program loan forgiveness, but that person worked in the real estate industry, according to a ProPublica database.

Media personality Ben Shapiro lived in California until he moved to South Florida in late 2020, according to news reports. Shapiro said in a Sept. 22, 2021, episode of his show that he’d lived in Florida for a year. It appears the Shapiro who got the  loan from the program is a different person.

President Joe Biden on Aug. 24 announced his plan to forgive up to $20,000 of student loan debt for eligible borrowers. The plan drew criticism from many conservative politicians and pundits.

Pushing back, cheerleaders of Biden’s move took to social media. They drew parallels between the student debt cancellation plan and another kind of debt forgiveness: the federal government’s Paycheck Protection Program loan forgiveness. That federal program was designed to help small businesses continue paying employees throughout the COVID-19 pandemic’s early months, and many loans from the program were forgiven.

Even the White House got in on the action, calling out Republican lawmakers whose loans from the program were forgiven.

But not everyone exchanging barbs had federal loans forgiven.

Twitter users who alleged that Shapiro, a conservative commentator and relentless Biden critic who is based in Florida, received loan forgiveness drew their proof from screenshots of ProPublica’s Tracking Paycheck Protection Program database. The database can be used to search "every company approved for federal loans," according to ProPublica’s website.

But a closer look at the database indicates that a different person named Ben Shapiro received a Paycheck Protection Program loan — and, later, loan forgiveness:

A search of ProPublica’s database did not show that a Florida-based Ben Shapiro in the media industry received PPP loans.

A search of a second Paycheck Protection Program loan database, PPP-Loan.info, also turned up a California-based Ben Shapiro who received a federal loan from the program worth nearly $21,000. Both databases report the same lender, Celtic Bank Corp. PPP-Loan.info showed a partial address, which we linked to a Los Angeles realtor named Ben J. Shapiro.

We reached out to this Shapiro but did not hear back.

PolitiFact also searched the database to see whether the right-wing website Shapiro founded, The Daily Wire, received Paycheck Protection Program loans. We found no evidence that it did. The Daily Wire is based in Nashville, Tennessee.

Shapiro himself took to Twitter to debunk the claims.

So they found a person named Ben Shapiro who applied for and received a loan in Los Angeles in 2021. Here's the full screenshot -- notice the same amount. As you may know, I am not a real estate agent or broker. pic.twitter.com/oImtUImdFp

He added: "As you may know, I am not a real estate agent or broker."

Alyssa Cordova, a spokesperson for the Daily Wire and Shapiro, said neither accepted the federal program’s funds.

We rate these claims False.

The Tennessean, "Ben Shapiro is moving to Nashville, and he's bringing The Daily Wire with him," Sept. 15, 2020

Deadline, "The Daily Wire to move headquarters from Los Angeles to Nashville," Sept. 15, 2020