Facebook posts
stated on August 24, 2022 in an image shared on Facebook:
The FBI “spent more time investigating” the Jan. 6 Capitol attack than 9/11.

Supporters of President Donald Trump try to break through a police barrier at the U.S. Capitol in Washington on Jan. 6, 2021. (AP)

Federal authorities have charged nearly 900 people with crimes related to the Jan. 6, 2021, attack on the U.S. Capitol. But one popular Facebook post suggests the breadth of that ongoing federal investigation is disproportionate — especially when compared to another dark day in modern American history.

"You spent more time investigating 1/6 than 9/11," read the words in the Aug. 24 post, a version of a meme that stars SpongeBob SquarePants in a black "FBI" baseball cap. 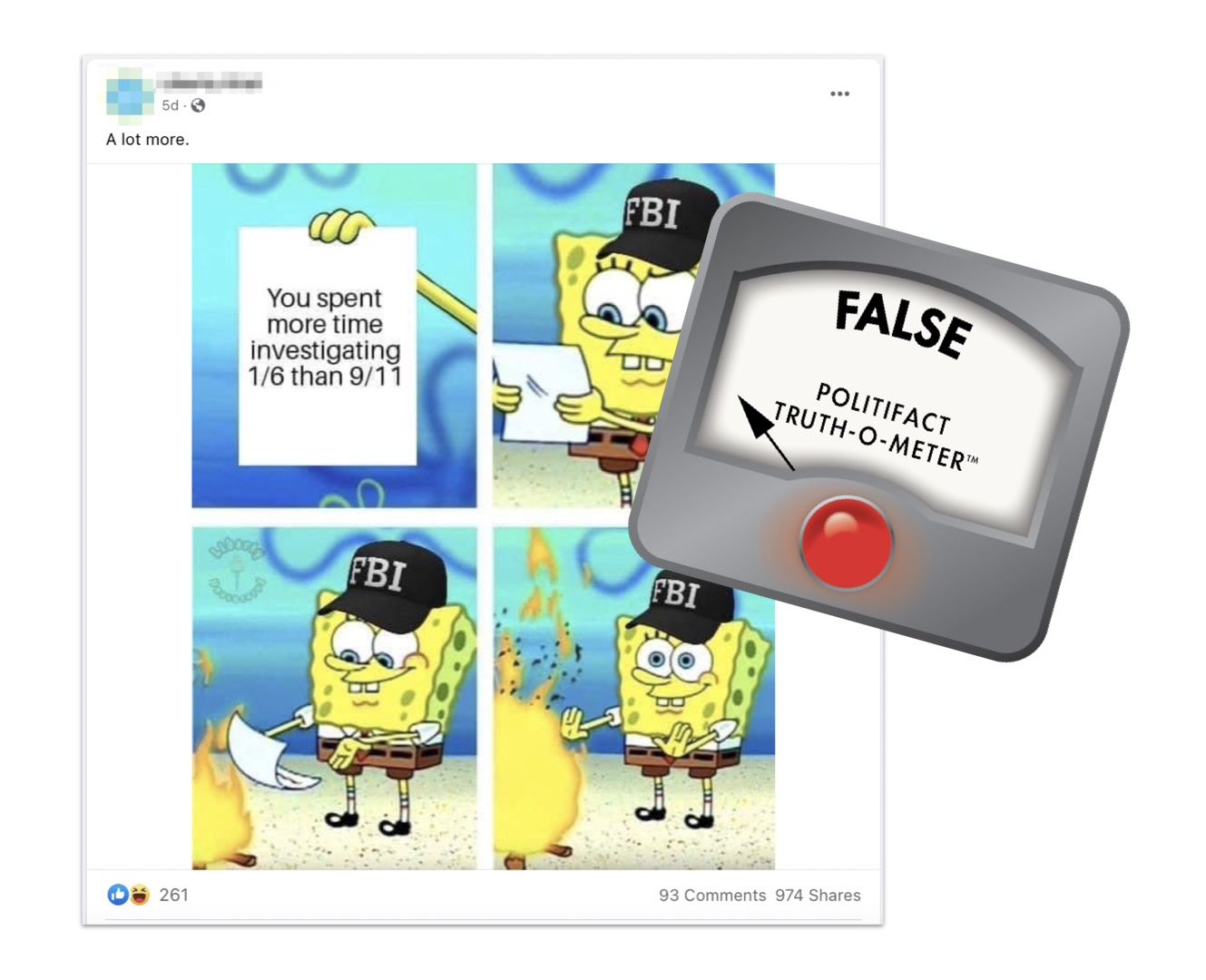 No. Although the events of Jan. 6  resulted in an investigation that has lasted 19 months so far, there’s no comparison. Records show that the FBI investigated 9/11 for at least about 15 years, and experts say it is likely the FBI is still investigating.

Attorney General Merrick Garland said on the Capitol attack’s anniversary that, "every day since, we have worked to identify, investigate, and apprehend defendants from across the country."

More than 3,100 people were killed in the Sept. 11, 2001, attacks, according to the Justice Department. Terrorists hijacked four planes that day. They flew two into the World Trade Center towers in New York City and one into the Pentagon building in Arlington, Virginia. The fourth plane crashed into a field in Pennsylvania before it could reach the terrorists’ target in Washington D.C. 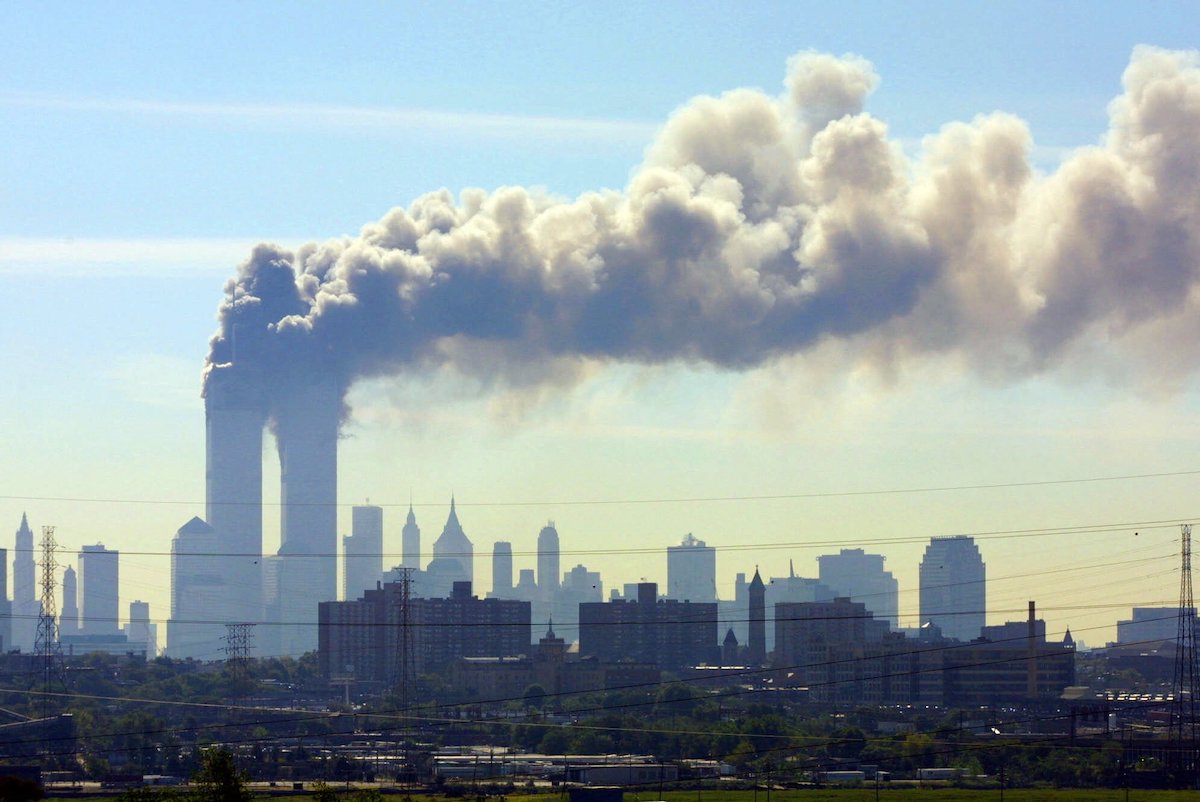 As seen from the New Jersey Turnpike near Kearny, N.J., smoke billows from the twin towers of the World Trade Center in New York after airplanes crashed into both towers on Sept.11, 2001. (AP)

Within three days, more than 7,000 FBI special agents and support personnel were assigned to work on the investigation. Six days after the attacks, then-FBI Director Robert Mueller said that more than 500 people were working 24 hours a day at FBI Headquarters.

The FBI "immediately initiated a massive investigation, called ‘PENTTBOM,’" into the attack, the Justice Department reported in 2003. That investigation "focused on identifying the terrorists who hijacked the airplanes and anyone who aided their efforts."

One extensive, public report on 9/11 was released on July 22, 2004 — about two years and 10 months after the attack. It was compiled by the National Commission on Terrorist Attacks Upon the United States (also known as the 9/11 Commission) and relied on information uncovered during the FBI investigation.

In June 2004, Mueller said the 9/11 investigation would continue as long as there were leads to pursue.

Since then, at least one small investigation named "Operation Encore" examined the Saudi Arabian connections involved in the 9/11 attack.

Although parts of the investigations remain classified for national security reasons, President Joe Biden ordered that the Justice Department review and potentially declassify some 9/11 investigation documents in 2021.

The documents later released show that the FBI was still investigating 9/11 as recently as April 2016 — more than 14 and a half years after the attack.

"If you really want to count time, the 9/11 investigative effort still continues today after 20 years," said Amy Zegart, a security and intelligence expert and Stanford University political science professor. "The FBI’s role now is likely to be small, but I highly doubt it’s zero, since the FBI is often involved in investigating terrorist attacks, including those abroad."

A meme shared on Facebook claimed that the FBI "spent more time investigating" the Jan. 6 Capitol attack than 9/11.

RELATED: The 2021 Lie of the Year: Lies about the Jan. 6 Capitol attack and its significance

Email interview with Amy Zegart, a senior fellow at the Freeman Spogli Institute for International Studies and a professor of political science at Stanford University, Aug. 30, 2022

CNN, "Everything you need to know about the federal investigation into January 6," July 1, 2022

United States Department of Justice, "Attorney General Merrick B. Garland delivers remarks on the first anniversary of the attack on the Capitol," Jan. 5, 2022

The New York Times, "The first Capitol riot arrests were easy. The next ones will be tougher," Jan. 21, 2021

United States Department of Justice, "One Year since the Jan. 6 attack on the Capitol," Dec.30, 2021

Insider, "The FBI is asking for the public's help to identify the Capitol insurrectionists in one of the most well-documented crimes in US history, and the internet thinks it's laughable," Jan. 7, 2021

Insider, "At least 896 people have been charged in the Capitol insurrection so far. This searchable table shows them all," accessed Aug. 30, 2022

GovInfo.gov, "The 9/11 Commission Report: Final Report of the National Commission on Terrorist Attacks Upon the United States," July 22, 2004

Office of Inspector General, "The September 11 Detainees: A review of the treatment of aliens held on immigration charges in connection with the investigation of the September 11 attacks," published June 2003

ProPublica, "Operation Encore and the Saudi Connection: A secret history of the 9/11 investigation," Jan. 23, 2020