Watts Up With That
stated on January 31, 2022 in a blog post:
“Facebook is spamming all climate articles by misleading readers about” the accuracy of climate models.

People across the political spectrum are critical of the influence Facebook wields over the flow of information. Now, a blog that’s skeptical of humans’ impact on the climate says Facebook is putting a spin on the facts it puts in front of users.

The blog, Watts Up With That, said in a recent post that "Facebook is spamming all climate articles by misleading readers about temperature measurements."

This complaint is aimed at Facebook’s practice of placing a link to its Climate Science Center information page on posts that may deal with climate change. Here’s how the link shows up:

The page is a collection of facts, charts and articles related to climate change science, along with links to sources of scientific information. "These facts from climate researchers correct common misconceptions about global warming and its impact," it says. It covers a number of points, among them, the use of climate change models that scientists use to project changes in temperature and analyze other patterns.

The Jan. 31 post on Watts Up With That takes issue with Facebook’s assertion that these models are reliable. It argues that Facebook leaves out information that would show you can’t really count on the models.

Is Facebook misleading the public about the accuracy of climate models? We took a look. (PolitiFact partners with Facebook to assess statements posted on its platform and receives payment for that work.)

The models at issue are computer models that simulate weather patterns over time to help scientists project how overall conditions will change as more greenhouse gases get into the atmosphere. They apply the basic rules of physics, such as the conservation of energy and mass, to factors such as air temperature, pressure, wind patterns and more.

Each run of a model produces results from those calculations to estimate changes in temperatures, rainfall, ice cover and sea level around the globe.

"The way scientists predict changes in climate patterns has proven to be reliable," Facebook’s climate science page says, in a summary that cites NASA as a source.

It notes successes in predicting global temperature increases, the course of Arctic warming and the divergence between temperatures in the upper atmosphere and lower atmosphere.

Eric Porterfield, spokesman for Meta, the company that owns Facebook, said the climate change center aims to cite "organizations that are coming to independent conclusions and are not politically swayed." In addition to NASA, the center links to the National Oceanographic and Atmospheric Administration and the United Nations’ Intergovernmental Panel on Climate Change.

The page also addresses skeptics of the models. "The myth that climate models are not reliable wrongly assumes that they are based on guesses and assumptions," it says. "In fact, they’re based on the laws of physics and have proven records of accuracy."

The Watts Up critique

The blog post from Watts Up accuses Facebook of failing to give readers complete information. It says the social media platform "conceals" cautionary words from international climate experts about climate forecasting.

For instance, it cites a passage from the 2013 IPCC report that says, "The scenarios should be considered plausible and illustrative, and do not have probabilities attached to them." The post characterizes this as saying the models are "speculative."

The post goes on to say "climate models grossly overstate global climate temperature anomaly impacts." It provides a 2016 chart from a University of Alabama climatologist that shows the results of models for how rising greenhouse gas levels would affect temperatures in the tropical mid-troposphere, at least a mile above the Earth’s surface. The average temperatures predicted by the models were higher than actual observations from satellites and weather balloons.

Both examples are misleading.

The part of the 2013 report about "illustrative scenarios" was talking about the human factors that are always tough to predict, like whether future governments would clamp down on greenhouse gas emissions, or the pace of economic growth. Both would affect levels of atmospheric carbon, but they have nothing to do with the way the models themselves were built.

As for the chart — versions of which appeared in a 2017 House hearing and circulate widely online — climate researchers have pointed out a number of flaws and limitations in it. High on the list of issues is the particular slice of the atmosphere it focuses on, the mid-troposphere, where temperatures are difficult to measure.

Models for that part of the atmosphere did overshoot the actual temperatures, but not by as much as the chart suggests. Zeke Hausfather, a data scientist at the University of California Berkeley Energy and Resources Group, downplayed the chart’s significance.

"Models are not perfect, but it makes a lot more sense to evaluate their performance on surface temperatures for the globe where we all live, rather than cherry picking a layer of the atmosphere a mile up," Hausfather said.

It’s much easier to measure temperatures at the surface, which means the data about surface temperatures is more accurate, and there are many more readings to draw on, compared with using satellites and balloons. Better data makes for better model performance.

Hausfather co-wrote a study with NASA scientists that measured the results of 17 climate models of global average temperatures against actual readings. They found that 10 models were on target, and another four would have been, if they had known more precisely how much carbon dioxide pollution the global economy would produce.

NASA’s page on climate models features this work. In addition, it cites older work by researchers who assessed the accuracy of the models used in 2004. They looked back (called a hindcast) to see how well the models’ results matched the past, and looked forward, to see how well they matched what actually happened after the model was run.

The chart below shows the comparison. Remember, this is for average surface temperatures across the globe. The red line is observed temperatures. The black line is the average of the modeled results. The accuracy was generally good. 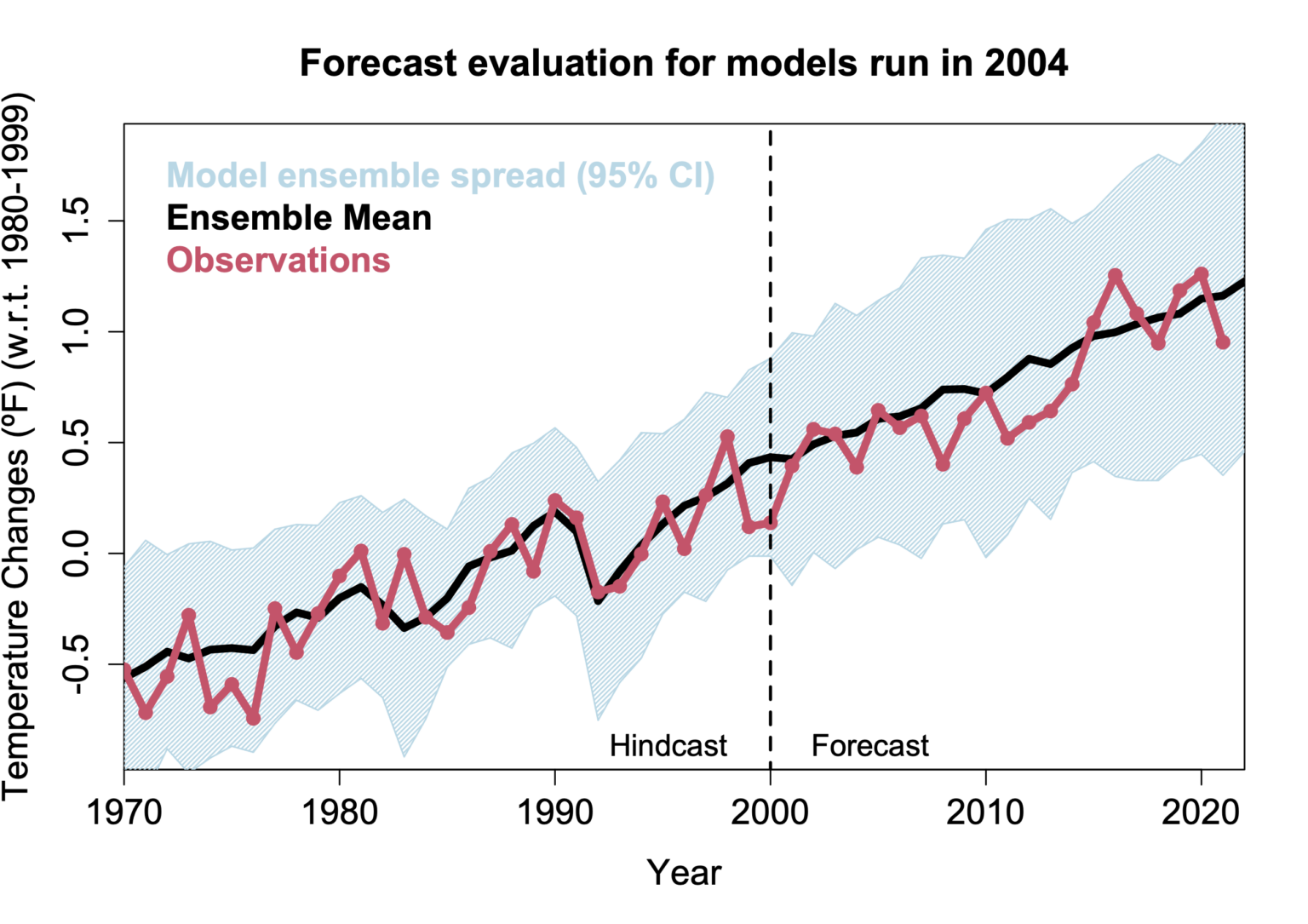 The IPCC has an ongoing program to assess the accuracy of climate change models.

In their latest report in 2021, IPCC researchers wrote that "climate models have improved and continue to do so."

While some models do better than others, they found no broad pattern of overestimating or underestimating temperatures.

"Both the current and previous generations of models show that increases in greenhouse gases cause global warming," they said.

We reached out to the Watts Up blog but did not hear back.

The Watts Up With That blog said "Facebook is spamming all climate articles by misleading readers about" the accuracy of climate models.

The article misrepresented cautionary words about climate change models from the Intergovernmental Panel on Climate Change. It shared a chart that relies on cherry picked data to undercut the reliability of models.

The great majority of climate researchers worldwide have data that shows models do an increasingly good job of capturing temperature changes at the surface.

Facebook links to this material do not mislead the public.

RealClimate, Comparing models to the satellite datasets, May 7, 2016