Tony Evers
stated on January 13, 2022 in News release:
Says he has issued more pardons than “any Wisconsin governor in contemporary history.”

During his eight years in office, former Wisconsin Gov. Scott Walker, a Republican, did not issue a single pardon. In contrast, his successor – Democrat Tony Evers – touts every one he grants.

"Last week, I granted another 54 pardons, bringing our total to 391 — more than any Wisconsin governor in contemporary history," Evers said in a Jan 13, 2022, news release.

Pardons, of course, can restore certain civil rights and privileges and relieve some legal issues. They differ from clemency or sentence commutations, which would allow a person to leave prison early.

Pardons under Evers have included low-level drug dealers, long-ago drunk driving cases, mistakes made as youth and more. Among other things, a pardon can make it easier for people to get jobs.

Is Evers right that the number is the most in "contemporary history"?

What’s in a number?

The key word in Evers’ claim, of course, is "contemporary."

Evers spokeswoman Britt Cudaback said in a Feb. 1, 2022, email that the governor’s office looked at the past 40 years. They also said they considered Evers contemporaries to be any previous governors still living today.

In that timeframe, only Gov. Jim Doyle, a Democrat, came close to granting the same number of pardons — 326, according to the Wisconsin Legislative Reference Bureau. But he did it over eight years in office.

Here is a look at how various governors compare: 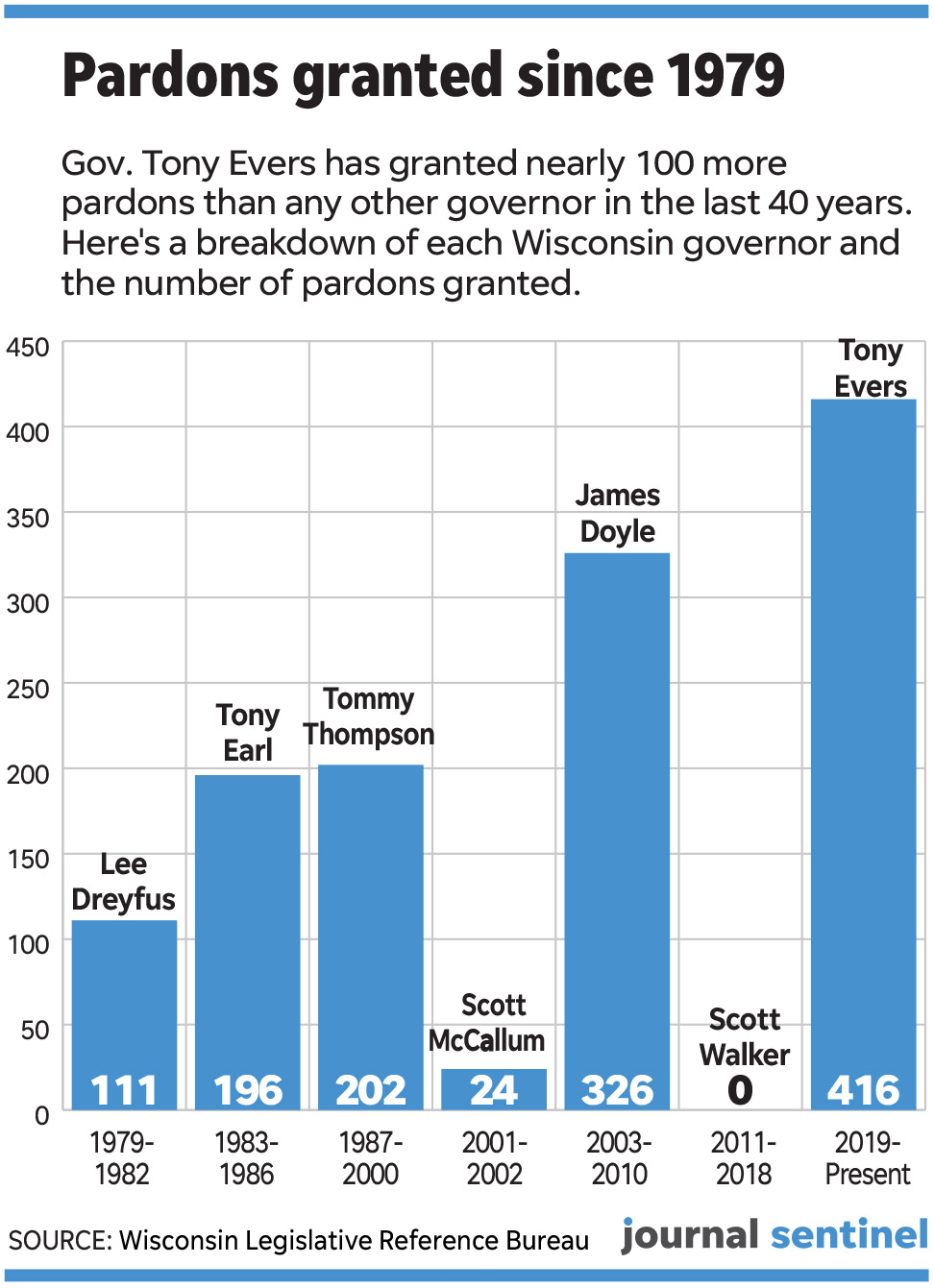 We say "at least 392" because tracking pardons requires reviewing Senate and Assembly journals or records held with the Wisconsin Secretary of State. And the exact figure for each governor may vary depending on who collected the information and how it was done.

For instance, numbers of pardons issued per governor provided by Evers differed from those provided by the Wisconsin Legislative Reference Bureau. The governor’s office said Lucey issued 457 pardons through his six years in office. The bureau says the number was 392.

For our figures, we are relying on the reference bureau, which compiles information on pardons, commutations and reprieves through the past couple years. The bureau has an ongoing effort to tabulate historical information on the use of executive clemency throughout all Wisconsin history.

To find a governor who issued more pardons than Evers or Lucey, you would have to go back to Gov. Julius Heil, a Republican, who served from 1939 to 1943.

At the time, Wisconsin governors served two-year terms. In his first term, Heil granted 486 pardons and another 448 in his second term, for a total of 934, according to the Legislative Reference Bureau.

Francesca Hong
stated on May 18, 2022 a tweet:
"In the Wisconsin State Assembly this session, more than 75% of GOP bills received a public hearing. Meanwhile, the GOP allowed less than 2% of Democratic bills to have a hearing."

Tom Tiffany
stated on February 18, 2022 Twitter:
The Biden administration has been "recklessly releasing potentially dangerous Afghans into our communities."

Tony Evers
stated on January 13, 2022 News release:
Says he has issued more pardons than “any Wisconsin governor in contemporary history.”

Patrick Testin
stated on August 29, 2021 TV interview:
"The vast majority of the (refugees) coming into Fort McCoy are not the SIVs" and some have "no documentation at all."

Eric Toney
stated on September 9, 2021 News release:
Says he “is the only candidate in the Wisconsin Attorney General race with experience as a prosecutor.”

Eric Toney
stated on August 22, 2021 TV interview:
"I'm the only front-line prosecutor in this race that's actually used the resources of the Wisconsin Crime Lab in the prosecution of cases."

Kathleen Vinehout
stated on August 6, 2017 a TV interview:
Under Scott Walker, Wisconsin is "still 16,000 manufacturing jobs lower than we were during the recession."

James Peterson
stated on June 23, 2017 a ruling from the bench:
"Ted Kaczynski has less restrictive confinement than the youth at Lincoln Hills."

Randy Bryce
stated on July 9, 2017 a TV interview:
Says Paul Ryan "has not had a public town hall within the district for over 600 days."

Scott Walker
stated on May 17, 2017 a radio interview:
Tax cuts approved and those proposed in his state budget "will exceed $8 billion by the time the budget is done."