Tweets
stated on February 6, 2022 in a tweet:
Turning Point USA is a white nationalist organization.

Efforts to start a Turning Point USA chapter at Johnston High School in Johnston, Iowa, sparked controversy on Feb. 7 among parents who were concerned about the conservative group’s views.

The proposed Johnston chapter, as well as a recent photo of Republican state legislators standing with high school students involved in Turning Point USA, has sparked debate about the organization, with opponents accusing it of being a hate group.

In a tweet, Randy Richardson, an organizer with Iowans for Public Education — an organization that advocates for public schools and against school vouchers — referred to a Turning Point USA hub at Pleasant Valley Middle School when tweeting:

"Not to mention it’s a white nationalist extremist group that’s been scrutinized by the Anti Defamation League and the Southern Poverty Law Center for 10 years now," one user wrote.

Not to mention it’s a white nationalist extremist group that’s been scrutinized by the Anti Defamation League and the Southern Poverty Law Center for 10 years now. Oh, and they had Kyle Rittenhouse keynote their last rally. Neat! pic.twitter.com/FI9srLwXB4

So, what is Turning Point USA, and what are its politics? And is the accusation that it is a white nationalist group correct?

No, said Mark Pitcavage, a senior research fellow with the Anti-Defamation League Center on Extremism. "It’s a right-wing Trumpist organization," he said in an interview with The Daily Iowan.

The Anti-Defamation League does not categorize Turning Point as a hate group, Pitcavage said. "It does have this checkered or spotted history with regard to individual members or local leaders in Turning Point USA making racist or otherwise problematic comments… but it’s not the ideology of the group itself."

Turning Point USA is a nonprofit founded in 2012 by conservative activist Charlie Kirk. Its mission, according to the organization’s website, is to "identify, educate, train, and organize students to promote the principles of freedom, free markets, and limited government." It participates in culture war debate; Kirk’s 2019 "Culture War" tour warned that American culture is under attack. PolitiFact has done fact-checks on some statements from the group and Kirk, often finding them false or misleading.

Kirk’s public engagements and the organization’s social media pages often follow the heated rhetoric of former President Donald Trump and the far-right, painting Democratic policies as socialism and boosting unsupported claims of fraud in the 2020 election. 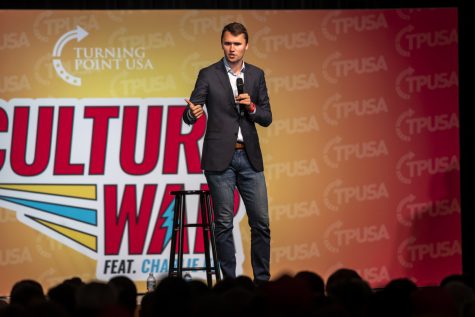 Charlie Kirk, the founder of Turning Point USA, spoke out to the Iowa City community during his "Culture War" tour. His tour at The University Iowa took place in the Iowa Memorial Union at 7 p.m. on October 23, 2019. (Mason Childs)

Kirk tours college campuses to speak on conservative politics and rally campus conservatives. The appearances often have been contentious. His 2019 visit to the University of Iowa drew 400 attendees and a handful of people protesting his presence on campus.

The organization also maintains a Professor Watchlist, which documents professors who Turning Point USA says "discriminate against conservative students and advance leftist propaganda in the classroom."

Parents at Johnston High School have spoken at school board meetings both in favor of and against the organization setting up a chapter at the school. "This organization is a racist organization," one speaker said at a Feb. 7 meeting of the board, according to the left-leaning news outlet Iowa Starting Line.

The Iowa Satanic School, not a school but a satirical group protesting school voucher bills, called Turning Point USA a hate group in a reply to the Richardson tweet.

Kids who have joined a hate group? Because they clearly don’t have good role models and guidance at home, so someone needs to help them.

Joseph Lowndes, a professor of political science at the University of Oregon who studies right-wing movements in the United States, and who appears on the Professor Watchlist, agreed, saying the group’s politics do not align with white nationalism.

He contrasted the group with white supremacist organizations like the now-defunct American Identity Movement, formerly Identity Evropa, which was based on "the preservation of ‘white American culture’ and promoting white European identity," according to the Anti-Defamation League.

"Those are white nationalist organizations because their ideology, what makes them white nationalist, is their dedication to the idea of the superiority of the white race, and I don’t think that’s what Turning Point USA is," he said.

Turning Point USA engages in what Lowndes called race-baiting, like Kirk’s "Critical Racism Tour" of 2021. In that tour, Kirk called critical race theory — a broad set of ideas about systemic racism developed by legal scholars in the 1990s — racist and argued that it is a pernicious force affecting public schools and universities.

Turning Point USA ambassadors and members have sparked their share of controversy in the past, garnering accusations of racism. In most of those cases, those members left or were kicked out of Turning Point shortly after.

For example, In May 2019, video surfaced of Riley Grisar, the president of the University of Nevada, Las Vegas chapter of Turning Point USA saying a racial slur and shouting "white power." Turning Point USA removed Grisar from the organization shortly after.

Turning Point USA also been targeted by the "Groyper army," a loose group of white supremacists who attack the organization for not being pro-white and anti-Semitic.

Self-described Groypers have shown up at Kirk’s events in the past, attempting to challenge Kirk on his views. Kirk repeatedly has publicly denounced white supremacists when they’ve shown up at his events.

"That BS they’re trying to say out there, it’s not who we are, it’s not what we believe, it’s not what Turning Point believes," Kirk said at a 2018 speech at Colorado State University, referring to white supremacists protesting outside the building.

Turning Point USA is a right-wing activism group, focused on promoting conservative politics on college and high school campuses and training activists around the country. Founder Charlie Kirk uses issues of race — such as critical race theory — as a rallying point, often drumming up controversy.

But scholars who research white nationalism and even Kirk’s critics say the ideas he advocates for aren’t the tenets of white nationalism. Turning Point USA also has a record of severing ties with white supremacists who are part of the organization. We rate this claim to be False.

PolitiFact, What is critical race theory, and why are conservatives blocking it? By John Greenberg and Amy Sherman, May 24, 2021

Theresa Greenfield
stated on October 22, 2020 a tweet:
Says Joni Ernst "supports the lawsuit that's headed to the Supreme Court that will” repeal the Affordable Care Act.

National Republican Senatorial Committee
stated on July 23, 2020 a TV aad:
The estate tax "would punish family farms and small businesses, forcing them to be sold off instead of passed on to the next generation.”

Theresa Greenfield
stated on May 18, 2020 a debate:
“I’ve taken a pledge not to take one dime of corporate PAC donations.”

Jack Whitver
stated on April 7, 2020 an email newsletter:
Before COVID-19, “Iowa had one of the lowest unemployment rates in the country, and many employers were scrambling to find qualified employees to fill their job openings.”