A 22-second video circulating on Facebook shows a plane being shot mid-air on a sunny day. The caption says it might be a Ukrainian MiG-29 fighter pilot nicknamed the "Ghost of Kyiv" shooting a Russian plane out of the sky.

"Air fighting continues," reads a Feb. 25 Facebook post that shared the video. "Ukrainian mig-29 takes down russian su-35. Is this the ‘ghost of Kyiv’ which allegedly took down 6 Russian warplanes single handed?"

The video is one of many Facebook posts about the so-called Ghost of Kyiv being shared amid Russia’s invasion into Ukraine. This video post was flagged as part of Facebook’s efforts to combat false news and misinformation on its News Feed. (Read more about our partnership with Facebook.)

It remains unclear whether such a pilot even exists. But some claims, like this one, are easily disproved.

The video shared on Facebook is a simulation that was created in the video game Digital Combat Simulator, a free online game. The stated goal is to "offer the most authentic and realistic simulation of military aircraft, tanks, ground vehicles and ships possible," according to the DCS World website.

A person on YouTube with the username Comrade_Corb uploaded the short clip on Feb. 24.

"This footage is from DCS, but is nevertheless made out of respect for ‘The Ghost of Kiev,’" the video description said. "If he is real, may God be with him; if he is fake, I pray for more like ‘him.’"

The video’s title on YouTube also indicates the video is a simulation: "GHOST OF KIEV | dogfight between Ukrainian MiG29 and Russian Su27 simulated in DCS World." 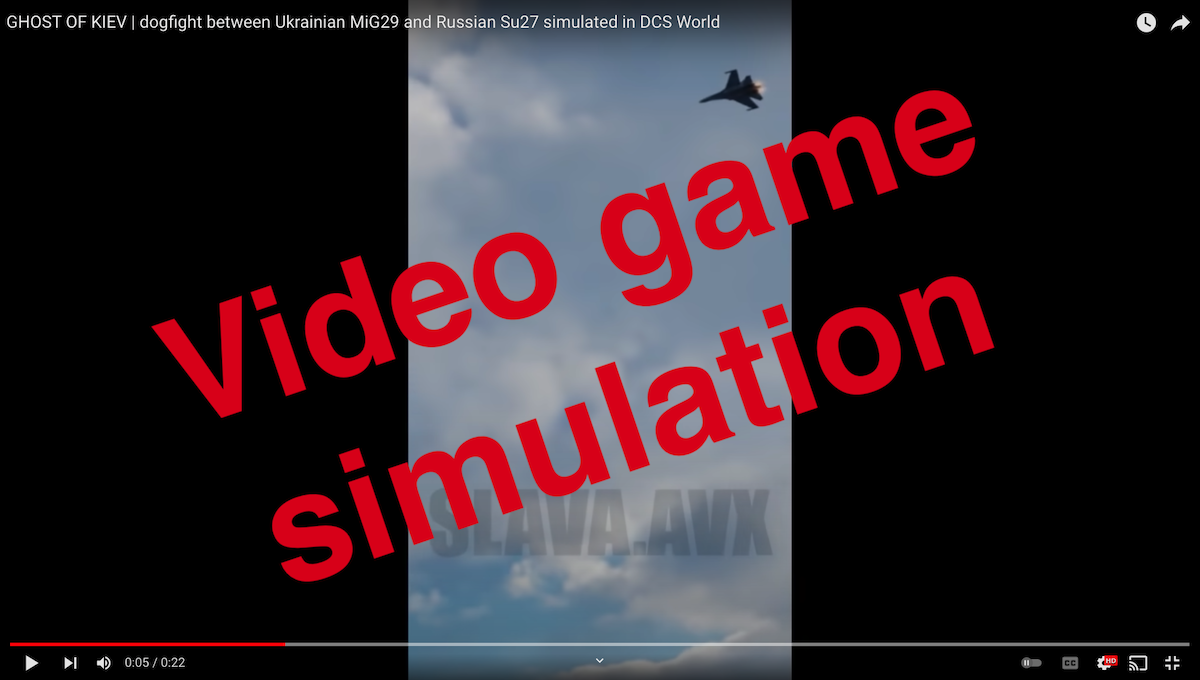 As the YouTube user acknowledged, it remains unclear if the famed Ukrainian pilot is real. Unconfirmed reports suggested that the Ghost of Kyiv was responsible for downing six Russian planes on the first day of the invasion.

Bolstering the claims, the Ukrainian Armed Forces reported that five Russian aircraft and a helicopter were shot down on Feb. 24. The Russian military denied those reports.

Aviation experts have said it is doubtful a single fighter pilot could down six planes in a day.

Former Ukrainian President Petro Poroshenko and other officials have referenced the Ghost of Kyiv in social media posts, further fueling speculation that the fighter pilot is real.

Ghost or no ghost, the video some social media users shared claiming that it showed a Ukrainian MiG-29 taking down a Russian Su-35 is not real.

The clip shows a video game simulation, not the fighting in Ukraine. We rate the video False.

RELATED: Don’t fall for these hoaxes about Russia’s invasion of Ukraine

RELATED: These video clips do not show Russia’s attack on Ukraine. They’re simulations from video games

The Independent, "‘Ghost of Kyiv’: Is the mysterious Ukrainian fighter pilot real?" Feb. 28, 2022