A Wendy's restaurant in Lakewood, Washington, May 5, 2020. The false claim that the company has used horsemeat is old, dating back to at least 2015. (AP)

Where’s the beef? Not at Wendy’s, according to a social media rumor.

A Facebook user promised to "never again" eat at the fast food chain, posting an image of what appeared to be a news article that Wendy’s had been exposed by the U.S. Food and Drug Administration for using horsemeat.

The image showed a horse being spun into meat, and included a quote supposedly from Wendy’s chief executive director: "We only use about 60% beef, the rest is made of meat fillers mostly equine (Horse) meat," the quote said. "Using this type of meat is a cheaper expense for us, allowing us to competitively price our food while been (sic) profitable at the same time. What we are doing is not illegal or unhealthy. The FDA has approved the contents of the meat." 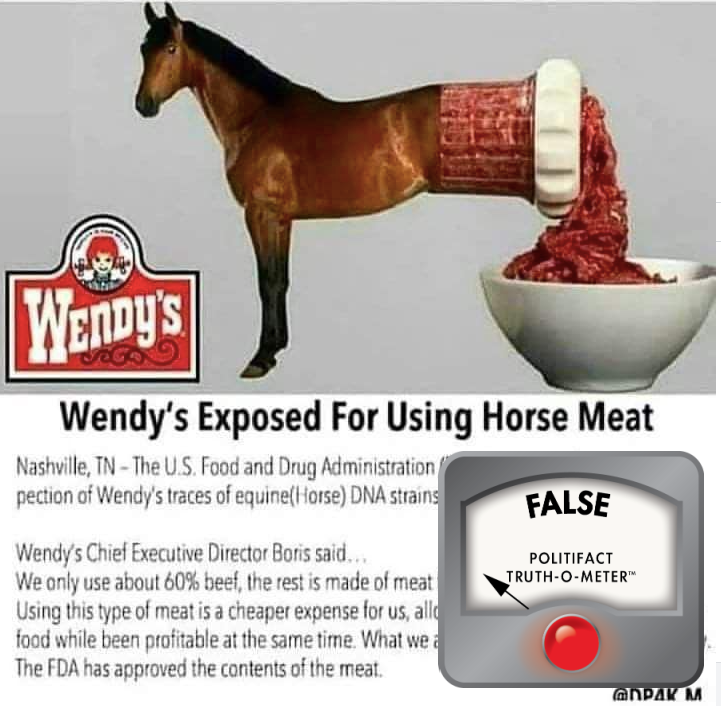 This false image about horsemeat at Wendy's has been debunked in years prior.

The post was flagged as part of Facebook’s efforts to combat false news and misinformation on its News Feed. (Read more about our partnership with Facebook.) That’s because there are a few things that are suspicious about this post.

The article gives only the first name of Wendy’s CEO: "Boris." The current CEO’s name is Todd Penegor.

Also, the doctored horse-and-meat-grinder photo has been shared before. A reverse image search on Tineye showed it was used as early as 2016, appearing with either a Wendy’s or Burger King logo. Both fast food companies have said they have never used horsemeat, Snopes reported in 2015. It was also reported that the claim was traced back to News Buzz Daily, a satirical news website.

The claim is as untrue now as then. A spokesperson from Ketchum, the public relations company representing Wendy’s, said the Facebook claim is false.

"Wendy’s does not now, nor have they ever, used horsemeat in their products," they said.

The FDA and Agriculture Department did not respond to PolitiFact about this claim. But a web search showed they have made no announcements about Wendy’s using horsemeat.

Emily Compagno
stated on July 5, 2022 a Fox News show:
In Kenya, “pregnant women can’t leave the house, so they absolutely have no constructive right to vote.”

Tweets
stated on July 9, 2022 a Twitter post:
There are no artifacts to prove that slave ships existed.

Instagram posts
stated on May 7, 2022 an Instagram post:
A Texas GOP lawmaker recently introduced a bill that would allow the death penalty for women who have an abortion.

Gun Owners of America
stated on June 8, 2022 a tweet:
“U.S. House of Reps. votes 226-194 to criminalize disassembling, cleaning, and re-assembling your gun without a firearm manufacturer’s license, including 8 Republicans!”

Facebook posts
stated on May 30, 2022 a Facebook post:
Aaron Salter Jr. was killed by a mass shooter because he was working on creating a water-powered car engine.