Facebook posts
stated on July 20, 2022 in an image on Facebook:
“The gunman at Greenwood Park Mall was a CIA asset.”

A truck blocks the entrance to the closed Greenwood Park Mall in Greenwood, Indiana on July 18, 2022. The mall was closed after police say three people were fatally shot and two were injured after a man with a rifle opened fire inside. (AP)

On July 17, an armed bystander returned fire and ended a mass shooting by killing an assailant who fired into a crowd at a Greenwood, Indiana, shopping mall.

The gunman killed three people and wounded two others before he was killed, but the actions of the armed civilian who intervened and stopped the attack are fueling online speculation that the shooting was a planned Central Intelligence Agency operation.

One meme showed someone smiling with the caption, "CIA bois activating their Indiana asset." It was followed by an image of the same person looking crestfallen with the words, "CIA bois when he gets clapped by a legally armed civilian less than 30 seconds into his assignment." 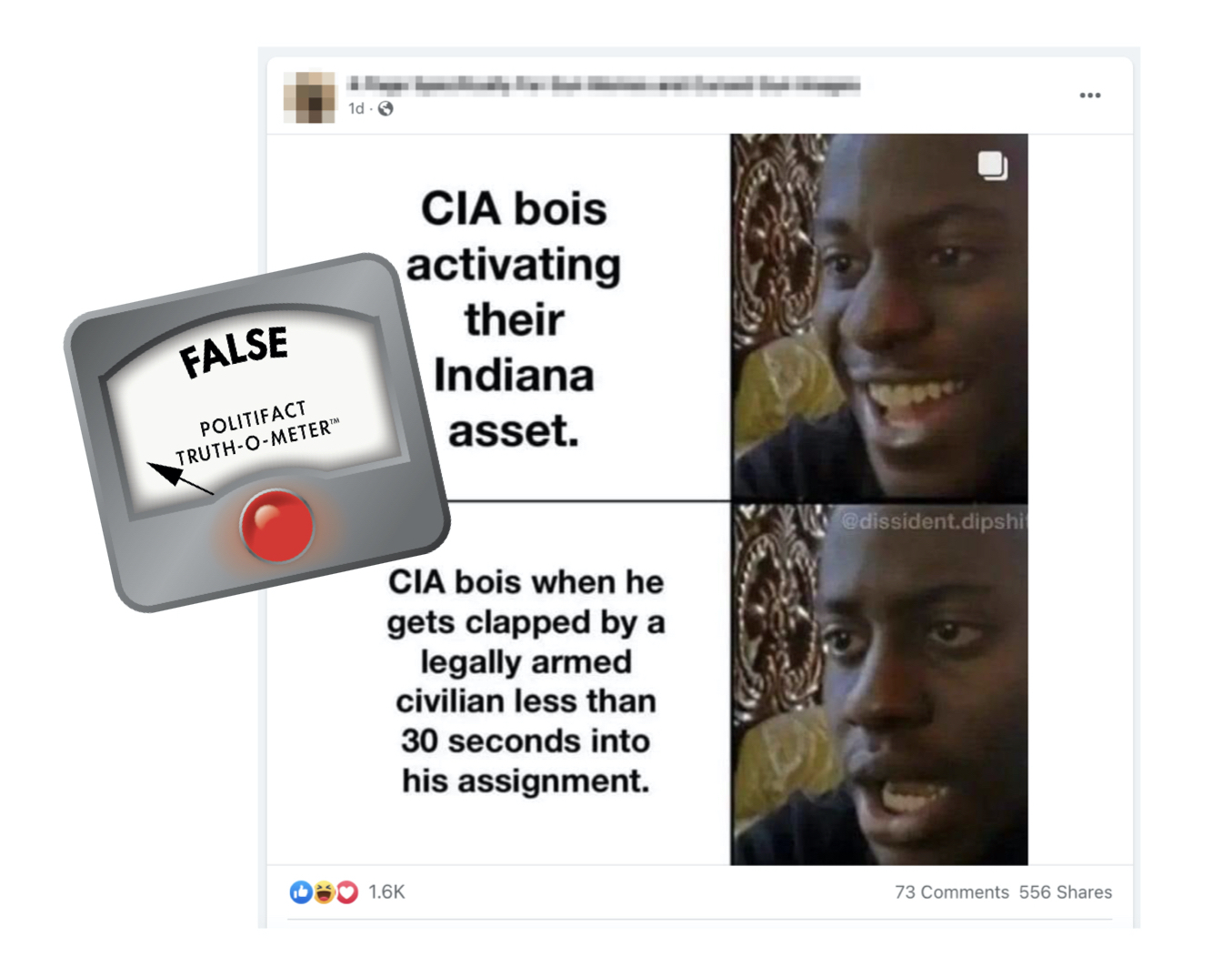 There’s no evidence that the gunman at Greenwood Park Mall was a CIA asset or that the CIA planned the attack.

The 20-year-old shooter had spent a little more than an hour in a bathroom before emerging with a rifle and opening fire, CNN reported. He was stopped within minutes, when a legally armed bystander, Elisjsha Dicken, 22, returned fire, the Indianapolis Star reported. Greenwood Police Chief Jim Ison praised Dicken for his actions.

Police are still investigating the shooting and the motive of the gunman, who had a juvenile record, including a fight at school, but no criminal history as an adult, according to news reports. He’d quit his job at a warehouse in May and recently received an eviction notice, The New York Times reported.

We found nothing that linked the gunman to the CIA.

The meme falsely suggests the shooting was a "false flag," a harmful attack that is designed to look as if it were perpetrated by one person or group, but was committed by someone else. Following mass shootings, we frequently see unfounded claims that the attacks were "false flags" devised by government officials seeking to enact gun control laws.

It is uncommon, but not unheard of, for an armed bystander to intervene during a shooting or attempted shooting.

After the Uvalde, Texas, school shooting in May, Pete Blair, the executive director of the Advanced Law Enforcement Rapid Response Training Center at Texas State University, told PolitiFact that active shooter incidents are most often resolved by an attacker fleeing.

That happened in about 25% of 434 active shooter incidents from 2000 until 2021, according to annual FBI data. The FBI defines an active shooter as "one or more individuals actively engaged in killing or attempting to kill people in a populated area." In 22 of those cases, the shooting was stopped when an armed citizen, security officer or off-duty police officer shot the attacker.

"People at the scene did intervene, sometimes shooting the attackers, but typically physically subduing them," said The New York Times in its analysis of active shooting incidents. "But in about half of all cases, the attackers commited suicide or simply stopped shooting and fled."

In May, for example, a woman shot and killed a man who started firing an AR-15-style rifle into a crowd of people at a party outside an Charleston, West Virginia, apartment complex, The Associated Press reported. No one in the crowd was injured.

That an armed bystander stopped the mall shooting on July 17 is unusual. But it doesn’t show that the attack was part of a CIA operation.

A viral post shared on Facebook suggested the Greenwood Park Mall shooter was a CIA-activated asset. The suggestion is tied to "false flag" claims, which happen frequently after mass shootings like the one in Indiana. Police are still investigating the shooting, but we found no evidence that the CIA planned Greenwood Park Mall shooting and an armed bystander’s intervention doesn’t show the attack was a "false flag."

RELATED: Why do some people think mass shootings are staged every time?

The New York Times, "After Indiana mall shooting, one hero but no lasting solution," July 19, 2022